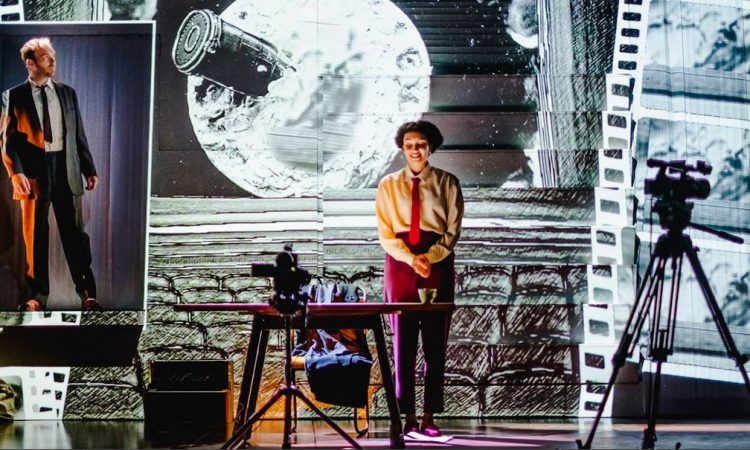 It’s New Year’s Eve in 1965. A jaded cop is in no mood to hear the deluded ramblings of a woman who’s just confessed to a murder. In the hands of multimedia theatre maestros IMITATING THE DOG at LEEDS PLAYHOUSE this is just the start of a surreal and nightmarish journey into the past. RICHARD HORSMAN went along for the ride.

Don’t be fooled by the bare stage and spartan props as you take your seat in the Courtyard Theatre – you’re about to be dazzled by a show which integrates live action with projected images as Imitating The Dog, a company well known to Playhouse audiences, finally get their hands on the Dracula legend and give it a startling new twist.

Dracula is a project the creative team of Andrew Quick, Pete Brooks and Simon Wainwright have wanted to get their teeth into for some time – a graphic story which lends itself very well to a multimedia treatment based on graphic novels. The pages turn on the projected screen and the faces of the cast appear as moving drawings in the frames of the comic-book , or sometimes with their mouth and eye movements eerily superimposed on photographs as the characters speak.

This is a technique this company have pioneered, and playhouse audiences have seen before on stage with their Night of The Living Dead – Remix before lockdown and on the back of a lorry during it with Dr Blood’s Old Travelling Show which they performed in the Playhouse car park (or New York Square if you prefer). It’s a treatment that lends itself very well to the familiar storyline .. except it’s not that familiar.

Be ready for a surreal and unexpected retelling of the Dracula legend that puts Mina Harker, wife of dashing Edwardian vampire-slayer Jonathan, at the heart of the tale. Bradford’s own Riana Duce takes on this complex character and leads the audience through a narrative that weaves between plausible and fantastical, composed whilst shrieking inside with the horror of what her life has become.

Adela Rajnovic is the female copper – “WPC” in 1965 – landed with the New Year’s Eve shift who tries to empathise with Mina, and wants to believe there’s something to her story even when what she claims is clearly absurd. This beautiful twentysomething in front of her can’t be 91 years old however much she might know about events of the time.

Imitating The Dog regular Matt Prendergast is taking no crap from this time waster as the grizzled Detective Sergeant doing the festive shift for the overtime. There is no supernatural. If there’s something weird to be explained, be that dead flies or a disappearance – it never happened.

Put these three characters together and the story unfolds .. a gripping and unexpected new telling of the Dracula tale with stunning video images that takes the narrative to new levels of weird. And all just in time for Goth Christmas. The production’s timing won’t be accidental.

Captioned performances will be available throughout the tour.