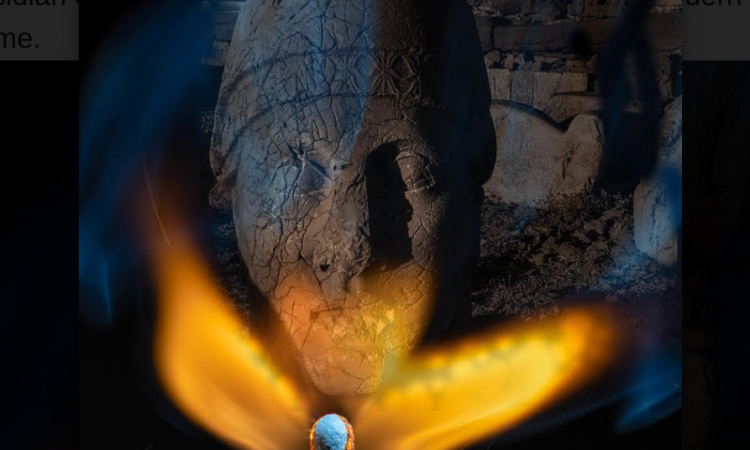 Jo jumped, causing her wicker chair to squeal and her iced nettle tea to spill. The loudness shocked her but the profanity even more. George never swore. The only time she can remember was when they were on a dig and he’d uncovered an incredible find – an ancient altarpiece, broken and fire-blackened.

‘Fuck!’ George shouted again as if to confirm it wasn’t any accident and stood up from the rocking chair he’d made from driftwood. The history book he’d been studying tumbled onto the floor. This was another shock for Jo; George treated his books with a reverence that bordered on the spiritual.

‘We’ve been doing it wrong. We’ve wasted so much precious time.’

George hurried into the kitchen. Jo heard rummaging amongst their recycling bins. She got up and followed him still clutching her tea.

The kitchen was a mess with flimsy plastic wrappers and containers strewn across the floor. George held open an old black bin liner and was stuffing it with hard plastic containers. He got cardboard from the paper-recycling box and stuffed that in too.

‘George, what are you doing?’

Bewildered, Jo could only watch as George behaved like a grave robber in a Pharaoh’s tomb.

With the bin liner stuffed, George rushed outside. Jo followed, abandoning her glass to the counter top.

In the back garden, George headed for the runner bean patch. Against a cloudless blue sky it was resplendent with bright red flowers. He pushed the bin into the centre of the beans, breaking a couple of supporting canes. Next he went to the garden shed and returned holding a bottle of white spirit. He poured the contents onto the bin liner.

‘George! Have you gone mad?’

This time George turned to look at Jo, his eyes blazing with passion. ‘No. The opposite. I’ve become frighteningly aware.’

He went into the house and returned with a lighted switch of screwed up paper. He put it to the bin liner and held it there until a strong flame licked the air, tasting it. The tongue gave birth to a thin snake of black smoke.

‘George!’ Jo automatically turned to the rainwater butt near the compost bins and grabbed the plastic bucket that lived below the tap. The butt was empty and Jo intended to go out into the street to the communal standpipe to fill it when she felt a firm hand on her arm. She turned to look at George. He had a wild look on his face. Jo thought he might be having a breakdown.

‘What are you doing, George?’

‘I’m sending a signal, Jo. I have to alert the world.’

Still holding the bucket Jo watched the fire take a firm hold of the plastic – a plume of solid black smoke billowed up. The red flowers of the bean plants started to wilt and turn brown.

‘Get more plastic from the house, we need to send a powerful signal.’ George took the bucket from Jo, walked back to the beans and threw it onto the fire. The black pall of smoke thickened until it was an ugly river of pollution pouring into the sky.

Jo started to sob. Her partner had gone mad from anxiety.

By the time she’d got over her shock, she noticed George coming out of the house armed with more bits of plastic and rubber. The black column of filth rose way above their house. Their next-door neighbours, Jean and Tracy, bustled into the back garden to investigate. Jean carried a red plastic bucket. George spotted it. ‘Excellent, let me have that,’ he said, and before Jean could say anything, George had taken the bucket. He threw the small amount of water it contained onto the dead grass then tossed the bucket onto the fire.

Tracy prodded her phone. More neighbours appeared. Any attempts to put out the fire were frustrated by George who yelled at them and wrestled extinguishers and blankets from their hands. ‘I know what we need to do,’ he shouted. ‘We’ve been stupid all this time.’

Most of the neighbours from the cul-de-sac had gathered in the back garden now to witness the abomination of a smoke stack so thick and black it looked to be carved from Vantablack.

The fire brigade turned up.

Four burly men marched in wearing heavy, reflective uniforms. Their faces were drenched in sweat. That August week had seen the hottest temperature ever recorded in the UK – forty-four degrees Celsius.

George tried to stop the firemen from interfering but against four of them he had little success and the fire was doused with a single roar from a CO2 canister.

When the drama was over people surveyed the scene of devastation in the bean patch as if an explanation lay there.

George wandered over to the tinder-dry compost heap nearly a metre high, and climbed onto it. He looked over the small crowd and waited until they were watching him. Then he spoke in a voice trembling with conviction.

‘I know how this must look, but I haven’t gone mad. In fact, I’m as sane as I’ve ever been and I can see the path we must all take.’

He looked at people in turn, holding their gaze for a moment as if to demonstrate this fact.

‘You all know me as the eccentric old fool who rides his bike everywhere, takes cold showers and composts his sewage. I now realize these were indeed the actions of a deluded fool.

‘When compared with the biggest polluters of the world, such actions amount to a tiny drop in the fished-out ocean. At best, all the combined efforts of individuals like me might add a couple more years of delay before the inevitable catastrophe descends. This drought is just the start. We’ve been had by the propaganda. It’s not us that need to take responsibility for saving the planet; it’s them – the billionaires, the governments, the multinationals.

‘For every electric car sold, two SUVs are built to wipe out any gains made. Why is this allowed to happen? Because the people in power don’t care, they’re too busy enjoying themselves at our expense. Throughout history, the elite gets the poor majority to do the dirty work while they enjoy the fruits. At best, our sacrifices will buy them a short delay before the disruption starts to cause societal breakdown. We worry over plastic straws while governments sell arms to rogue states to wage wars on the poor.

‘Well, no more. To demonstrate our seriousness we must do the opposite of what we’re currently doing. Instead of being enablers of the elite, we must become their nemesis.

‘I’m going to throw my bike into the canal and use my life savings to buy the biggest SUV I can find. I’m going to dig up my vegetable gardens and lay a plastic lawn. Then I’ll park the SUV on it and leave it idling twenty-four hours a day. If someone steals it I’ll just get another. I’m going to leave all my electrical appliances on permanently. And I urge you to do the same. Don’t worry about the future because it doesn’t exist if we don’t act immediately.’

George’s face was wet with sweat and tears.

‘We will all hire big vans and take our plastic trash and sewage to the coast to openly dump in the sea. We’ll go to a seaside resort where the rich have second homes. Let them see our revolting disregard for the planet.

‘We need to get as many people as possible to start wildfires. We need to behave like the biggest polluters of the world do. We need to send an unambiguous signal to the government and the elite that says, “FUCK YOU. If you think we’re going to sacrifice our quality of life just so you can enjoy yours for a bit longer then you’re mistaken.”

‘Think about it. If we all behave like the elite, then the game’s up. The governments will realize they’ll have to do something. They’ll have to bring in emergency powers, close down the oil companies, ban traffic, shut down the economy. The only way we’ll get any meaningful action is by accelerating the emissions. If we do this now, we might escape the very worst of the catastrophe.

The group stared in silence. In the maddening heat, Jo felt a weird energy pulse through the crowd. George had spoken the truth. Deep in their bones, everyone recognized it. Some had still clung to the superstition that technology would save them. Others had clung to the belief their rulers were wise enough to prevent catastrophe. George had just made a bonfire of their last comforts.

A teenager in the group, realizing his future had vanished shouted, ‘you bastard!’

This word seemed to inflame the crowd. Voices burst into nonsense and babble. Jo listened, fascinated by the guttural sounds and fractured sentences and realized it was trying to express anger; anger so out of control, it couldn’t make any sense.

One of the neighbours, Roy, a normally quiet man rushed at George with a spade he’d picked up from the garden. The group watched impassively as he struck George on the knee with it. There was a loud crack and George yelled in pain. As he fell onto one knee the group focused their rage on him. Other men crowded round the compost heap and dragged George off it. The teenager dashed forward and started kicking George.

Jo was horrified and screamed at the people to stop. She felt the hysteria infecting the group but her abiding love for George prevented her from getting sucked into the conflagration of fury.

She turned to one of the watching fireman and pleaded with him, ‘do something.’ The fireman nodded and took off his heavy jacket. He moved off but instead of heading towards the melee he went out of the garden into the street.

Jo tried to pull people off George but they possessed the strength of the insane.

Minutes later she was knocked aside by the fireman she’d spoken to earlier. He barged through the bodies towards George, grabbed him by an arm, pulled him up then tossed him onto the compost heap. George moaned and waved an arm still trying to ward off blows, blood streaming from his broken nose. It was then that Jo noticed the green plastic container the fireman was holding. He started to unscrew the cap and the mob recognized what he was about to do. They backed off. The fireman poured accelerant over George.

When the can was emptied the fireman produced a match. Jo screamed. She felt arms grab her and pin her to the spot. She heard a demonic voice hiss in her ear, ‘We’re acting out his will.’ She watched the lighted match arc from the fireman’s hand in slow motion. Before it hit George a ghostly blue light rippled over him as the fumes ignited.

Jo watched. Her only defence against such barbarity was to tell herself the world had gone mad, completely and utterly insane. As the blackened figure of her husband tried to crawl out of the inferno, she was transported through time to a particular scene from history she had envisaged whilst holding a broken and fire-blackened altarpiece. The story it told was of failure by a section of the elite in a once prosperous civilization and the desperate people exacting their revenge in the only way they knew how.

She realized what she was witnessing, was the slow repeat of history.