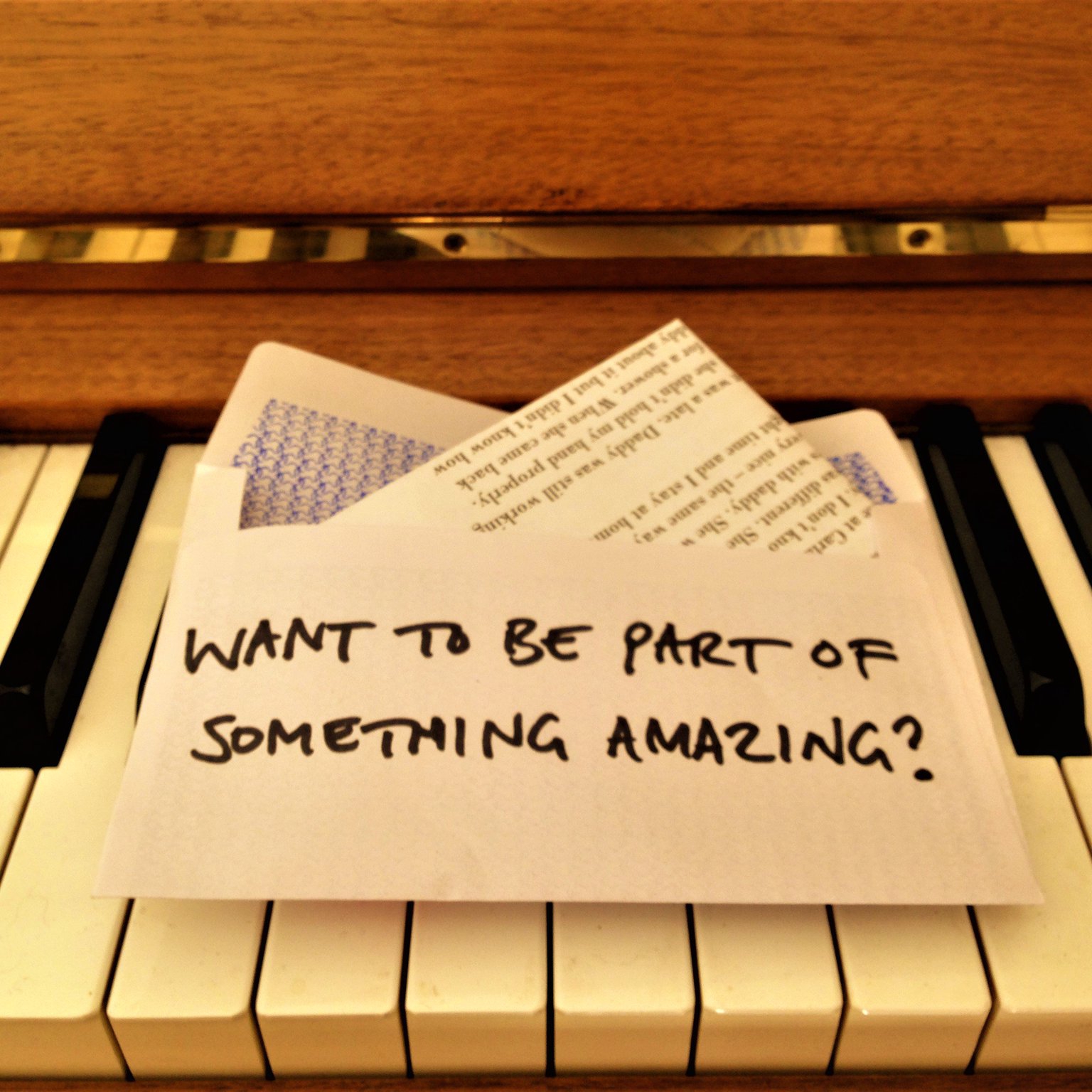 Have you ever stumbled across a mysterious envelope in public with the instruction “Read me” written on it? STEVE CLARKSON tells CV’s JESS OWEN why #foundfiction is hide and seek on a whole new level.

The brainchild of Steve Clarkson, #foundfiction sees writers send in their short stories, which are then anonymised, printed, folded up, put into envelopes, and randomly distributed across the UK and other countries for the public to discover.

“Sometimes people find an envelope, take it home and keep it to themselves,” says Steve, “but we invite finders to use the hashtag on social media to join our digital community. It’s a relationship between print and digital to connect readers with writers across the world.”

Steve came up with the concept of #foundfiction back in 2014 and since then more than 100 of the stories have been found that he knows about.

“The project started as a way to get my friend’s work out there. My friend is a shy writer and didn’t like the fact that his name would be attached to the stories, so he came up with the concept of #foundfiction, which would be completely anonymous. People could find and read his stories and use the hashtag to let him know what they thought.”

The pair started distributing stories close to home  in Leeds and York. Steve tells me that it was “the best moment ever” when the first envelope was found, and soon other writers were wanting to get involved.

“Now we have around 25-30 writers who have contributed approximately 40 different stories, which we print off in equal numbers and distribute everywhere. We have writers in America and Australia, plus Polish writers who write in Polish and distribute their work in Poland.”

So how did they manage to globally expand the project?

“Word got out in Poland and we did a feature in a Polish magazine and that’s how those writers got involved. I have also travelled in the US, and so I got in contact with some friends out there and asked them to distribute stories. It started with a friend in Denver and then people would take envelopes on holiday. It was also through word of mouth, as we had some blog posts written about us.”

Anyone can send in a short story to for Steve and his team to have a look at. #foundfiction welcomes all  genres so long as a story is no more than 500 words long. This keeps things short and snappy, says Steve.

“We encourage anyone across Leeds and beyond at any level to send their stories to our email address. We do have to check them, as they are left in public for anyone to find. We don’t play it too safe, but there is a line and certain things we would never print. Usually we have had a fantastic quality of work.”

#foundfiction has already helped to inspire others to start writing. Steve tells me of one response he had where a girl, waiting gor a date who never turned found a story envelope while flicking through the menu. She read the story, ran home and spent the rest of the evening reading and writing. She said she hadn’t felt like that in many years.

“We had another comment on Instagram where someone found an envelope in Glasgow. They were in a café where there was a Spoken Word event on. They were just going to listen to everyone else, but she found this story and decided to read it out loud. She said she wouldn’t usually have the confidence to do something like that.”

The stories have also helped re-ignite the passion for writing in others. Steve tells me of someone who found an envelope in Skipton and started writing again.

“It has just been great to see the connection between readers and writers. That’s what we’re all about.”

Having found itself receiving funding from Leeds Inspired to help with the costs of printing and postage, #foundfiction will be able to grow.

“We would like to get lots of people in Leeds involved, and grow further across the UK and into other cities. We would like to get more work translated and distribute them in other countries. It may take one hundred steps, but one day this project could be a disrupter of the publishing world.”

The funding has also helped with organising the launch event at Leeds Library on Thursday 8th February. Steve hopes it will encourage other writers to send in their work and get fans of literature to connect with the idea.

The line up includes writers and spoken word poets Phil Pearce, Colleen Pilkenton and Rose Drew. There is also a film montage.

“It will be a cool night as we have things happening, which have never been done before. For example, there will be a live artist on the night. Jay Sillence will be on stage with the spoken word performers doing a visual representation of what is being said. It is just a different way of expressing the story.”

Steve will also be touring a “writing desk” around Leeds on the run up to the launch night.

“It will be a desk with a piece of paper and a quill left on it. I will write the first line of the story and then members of the public are encouraged to add a line at a time. There will be a leaflet on the desk to give more info too.”

Each story will be read out on the night, and there may be a similar activity during the interval on the launch night. So, if you used to enjoy a game of “consequences” then you’re in for a treat.

“I want it to be a really special and rememberable night and for people to see things they haven’t seen before in terms of literature.”

Already sold out via Eventbrite, Steve hopes to be able to squeeze a few more in on the door on the night.

The next time you find yourself wandering around the city or beyond, don’t forget to check café menus, crevasses in trees, or flick through the pages of a library book … Who knows what you may find?