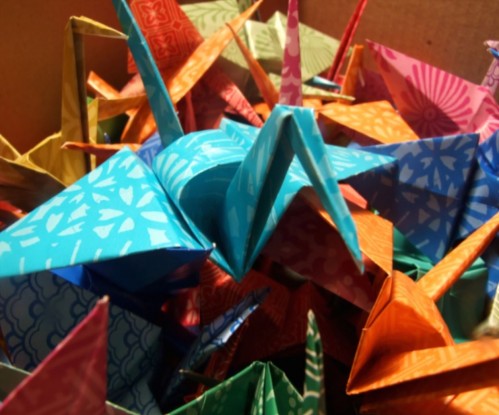 We are big fans of Kirsty and her ability to fold big things into little objects of beauty, witness Elly Oracle’s recent post on Foldageddon…

We caught wind of a rather special ‘Folding For Peace’ event happening Thursday 4th August and asked Kirsty to explain more:

I will also be folding cranes on 4th August between 12.30pm-1.30pm at the City Museum cafe, then from 5.30pm onwards at Nation of Shopkeepers for those who can’t attend the ceremony but would like to mark their remembrance, and to make some cranes in advance for use during the memorial ceremony. This is an informal session joining me whilst I make cranes (not a full on class), but if you can’t fold cranes, don’t worry, I’ll show you. Hopefully we’ll get a really good turnout and lots of cranes, which will then be placed in Park Square around the memorial during the ceremony, and will be left there in remembrance afterwards. If you can help, either by coming to the memorial or by popping along to one of the folding sessions, or even just telling other people about it, it would be really appreciated

As part of the ceremony, I will be showing people how to fold cranes, which are used worldwide as a symbol of peace, and are linked to Hiroshima and Nagasaki because of the story of Sadako Sasaki.

If you’d like any more information, please let me know or click here for my blog and contact details and I can answer any questions or point you towards the right people.