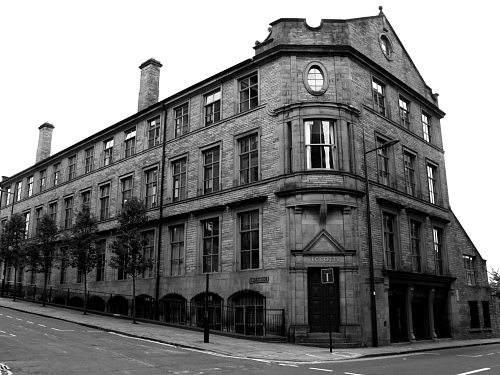 Poor relation to Leeds, a lost cause, caretaker of a huge ditch where the shops used to be.

It’s hard to deny that Bradford has suffered more than its share of disastrous town planning over the years, with that infamous crater perhaps being the most startling example.

It hasn’t always been like this. The ghosts and echoes of Bradford’s proud past – and maybe it’s confident future – are everywhere. Bradford’s faded grandeur reminds me of a film star fallen on hard times, down on his luck, a bit shabby around the edges and maybe even bankrupt, but still oozing class.

There’s potential in the old city yet.

Let’s start in Centenary Square, right in the heart of the city. City Hall towers above, the crowning achievement of the prolific local architects Lockwood & Mawson. Built in a Gothic style and opened in 1873, the building has a scale that’s quite astounding. There was ambition there, corporate confidence and a willingness to create a civic building that would show the world just how important Bradford was.

Lockwood & Mawson left a heavy imprint on the city. Besides being responsible for the design of much of Saltaire village and Sir Titus’ colossal mill, they also designed two more of the city’s gems, the Wool Exchange and St George’s Hall.

The Wool Exchange mirrors the Gothic style of the City Hall, and stands as a powerful symbol of Bradford’s former wealth and position as the centre of the Victorian wool trade. It was here that business happened, where wool was bought and sold.

This was the hub of the city’s purpose.

Today, the Wool Exchange houses a bookshop. Renovated carefully and respectfully, the interior of the building still holds its former power and glory.

A statue of Richard Cobden, peace campaigner, politician and driving force in persuading Robert Peel to rid Britain of the repressive Corn Laws, stands at the head of the trading floor.

Cobden proudly keeps watch over the books and the browsers. He seems quietly pleased to be watching people going about their business. 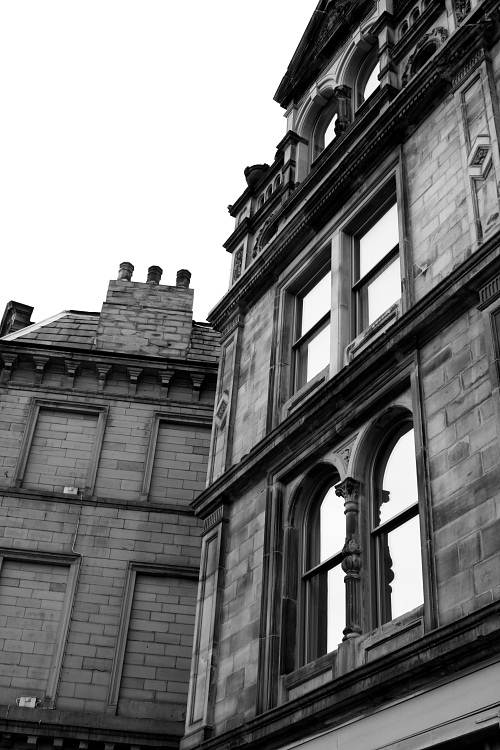 Round the corner, the third of Lockwood & Mawson’s buildings, St George’s Hall, is an austere example of a Victorian concert hall, capable of holding 3,500 in its prime, with a façade of classical pillars made of sandstone. The relatively downbeat design contrasts well with the fanfare of the City Hall.

Just up the road, opposite the rail station is the Great Victoria Hotel. Like the Midland Hotel, next to Bradford’s other rail station (two stations, no through line…figure that one out), the Victoria was built to luxuriously accommodate visiting businessmen at the height of the wool boom.

Back down into Centenary Square, in front of City Hall, you’re confronted with the City’s West End and the Alhambra theatre beside the quietly rotting New Victoria, Gaumont or Odeon cinema, depending on how old you are.

The Odeon represents the side of the city that’s gone wrong and lost its direction. The building is vast, a relic of the 1930s drive to build huge auditoriums. It’s domes dominate the western skyline, complementing that of the older Alhambra next door. Political and commercial indecisiveness have left it stood empty, gently decaying and crumbling, a sad shadow of the days when the Beatles and the Stones were drowned out by their screaming fans.

The Alhambra theatre still has life, and plenty of it. It’s a wonderfully preserved regional music hall that benefited from a forward-thinking renovation in the eighties, doubling the size of the stage, making the theatre capable of hosting touring West End productions. 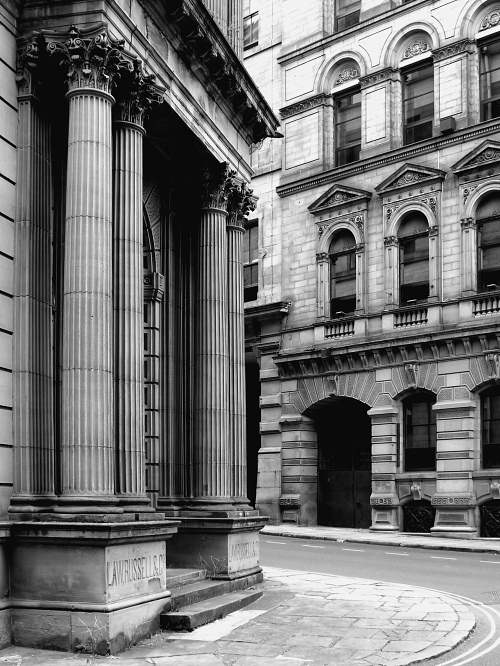 Back across town, past the shopping centre-less hole stands a dense cluster of warehouses, the heart of Bradford’s old commercial centre.

Built in the second half of the nineteenth century by German and Eastern European traders keen to impress, Little Germany is one of the country’s best preserved Victorian commercial areas. There’s an imposing feel about the streets, a claustrophobia brought on by the towering warehouses, small yards and closely packed buildings. It’s a foreboding area with a powerful history of business and commerce.

Flanking Little Germany stands the magnificent Cathedral. Dating from Saxon times, St. Peter’s has played a part in the city’s history at every turn.

During the Civil War, woolsacks – what else? – were hung from the tower to protect it from Royalist canon shot. They weren’t entirely successful…a couple of dents are still there.

The Cathedral sits on a hill, the blue clock face and huge, solid tower seemingly guarding the city, as it has done for five hundred years.

Bradford has more. Much more.

The bank at the head of North Parade, the red brick Co-Op building at the foot of Ivegate, the Royal Exchange building on Forster Square. Even the NatWest has a heavily French influenced building with a tower. Outside the city centre, Cartwright Hall is central to the superb Lister Park.

The wool barons and their fortunes may have gone – they’re all up the road in Undercliffe Cemetery, worth a visit just to witness the Victorian’s ostentatious view of memorial – but they left their civic mark behind.

Bradford may be bruised and battered these days, but the ghosts and echoes of former greatness are still here to be seen and enjoyed.  Places develop, grow and thrive with one eye on their past…these echoes of a Victorian golden hour are also the future seeds of Bradford’s regeneration.

Don’t write the city off yet.  Instead, have a wander around it. 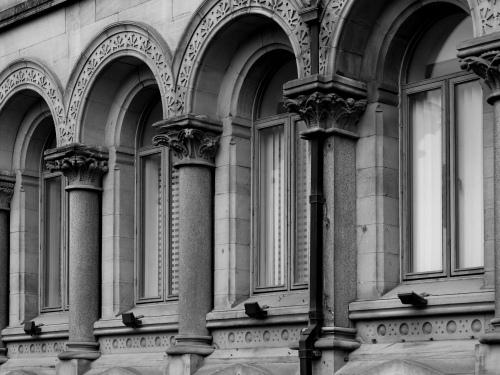