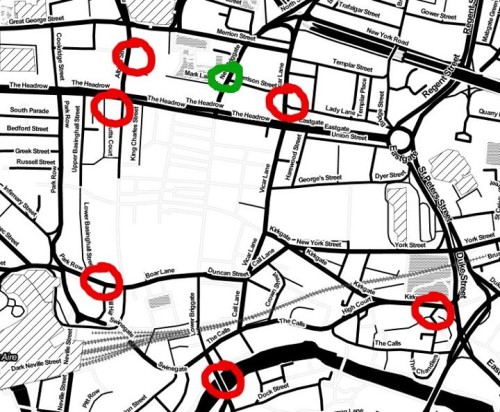 “Wait! We can’t go without the classicists … who’ll do the Roman Gods?”

Only at a psychogeography event could someone seriously consider holding it off until we’d found a scholar of a civilisation that declined and fell long before England was even toddling. And no, I don’t have a clue when the sun finally set on the Roman Empire. I’m strictly a post-industrial-revolution, skeptical kind of guy. Myths and legends are lost on me. And I always thought that one god was supernumerous, never mind the profusion of deities that clogged up the firmament in the old days. But here I was on a darkling Sunday afternoon hanging around in the North Bar about to celebrate something called Terminalia, a festival of Terminus, Roman god of boundaries and landmarks. I’d brought wine though.

When I started these sponsored posts the idea was to have a conversation over a bottle of wine and see where that led. There was nothing in the rules that said I had to have a conversation with another person. There’s nothing set in stone to say that I had to talk to an animate object even – I could chose to sit and chat with stones if I liked. In this case the stones marking the old city boundaries. That’s why I’m here with this bunch of psychogeographers, to tramp around the streets, drinking, talking and generally making merry.

In Roman times two owners of adjacent properties crowned a statue with garlands and raised a rude altar, on which they offered up some corn, honeycombs, and wine, and sacrificed a lamb or a sucking pig. They concluded with singing the praises of the god.

Honeycombs and corn proved hard to come by in Leeds city centre on a late Sunday afternoon. And psychogeographers tend in the main to be liberal-lefty livestock-friendly types so the worst harm that could befall a suckling pig in our company is a bit of gentle teasing. The only thing that would get sacrificed this evening would be a splash of wine at each stop along the way to honour the non-existent but thoroughly charming Terminus. He’s my kind of deity. 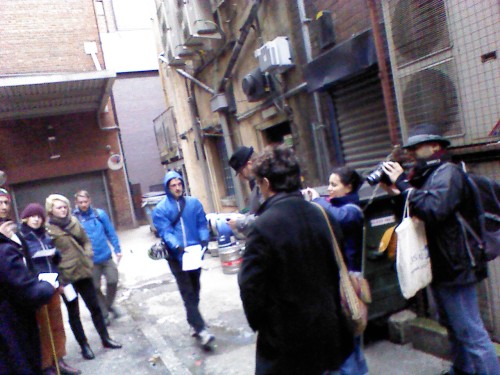 We set off, minus the experts in classical antiquity, at around 4.15. Tim – psychogeographer-in-charge for the evening – immediately led us down a blind alley. Possibly the most nondescript in town. The only saving grace was a bit of graffiti scrawled on an impossible to get at strip of suspended concrete; “Braford City FC”. I imagine the scrawler must have been upside down and balanced precariously, chalk clamped between his teeth, in order to make his mark on such an inaccessible place so we must all forgive his spelling mistake and congratulate the audacity … actually, no sorry, I can’t forgive someone who can’t spell the name of his own city. I could spell “Leeds” blindfolded, surrounded by piranhas, with an open can of John West tuna in my Speedos. Maybe that’s because we are made of stronger stuff than our neighbours? (I haven’t tested this!) 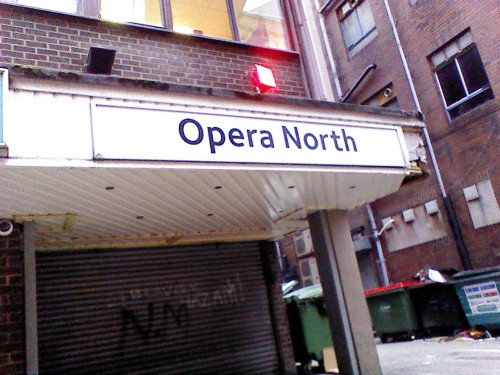 We then wandered down this street. Never heard of these people. Surely that’s an oxymoron? Opera? … North? … no, come on now. 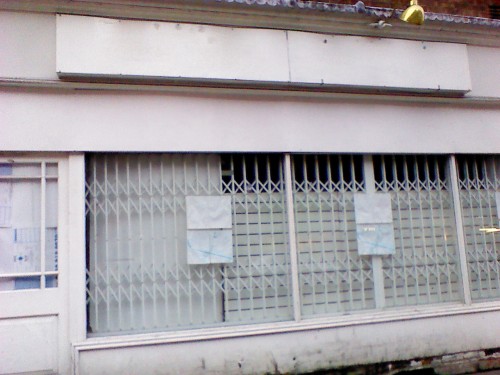 Tim said that psychogeography was all about boundaries and places where extremes meet. This was an interesting example. On this side of the street empty shops, derelict properties and grotty sex shops (“There is another entrance at the rear”) and only yards away the Sony franchise, thriving international supermarkets and an organic, independent deli. 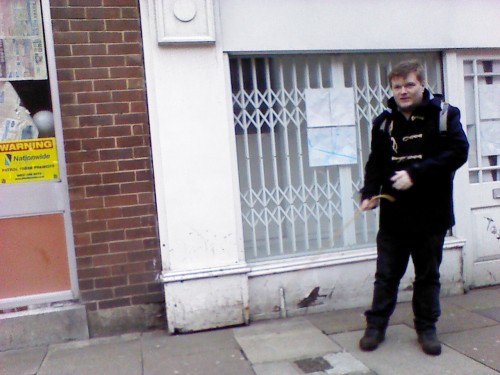 And here is the first stone, the “North Bar”. You can’t actually see it – and we aren’t exactly sure which bit of rubbish facade it’s behind – but it is there somewhere. Wouldn’t it be great to reveal the thing? It’s not as if these buildings have any other cultural/historical/architectural merit.

Tim placed a rose where he thought the stone was. We passed around a bag of mini creme eggs, a cake, some nuts and dried fruit, and those of us who drank toasted the gods. I splashed a little of the wine on the pavement. 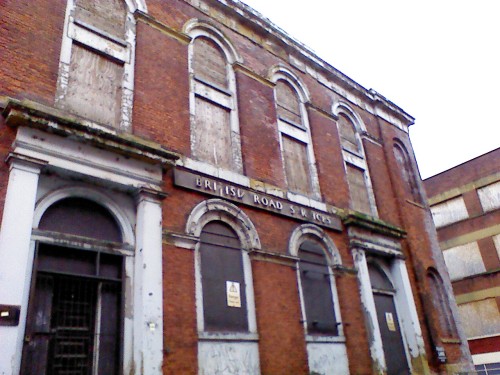 Around the corner there’s this building in the old Chinatown part of Leeds (some of us remembered that Chinatown was only really one fairly small block – still, it’s missed.) Apparently in the old days – before Mrs Thatcher – the road haulage industry was in public hands and this was the regional headquarters. It’s an old Wesleyan chapel, and was a fine building – I think its present state says something about how we value what’s left of public service … I think as a city we should be a little bit ashamed of what’s happened to the place. 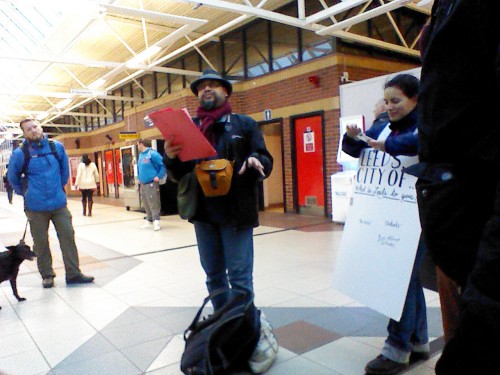 The next stop, in Leeds central bus station, was the most memorable of the evening, though probably for all the wrong reasons. We stopped bang in the centre of the station and psychogeographer extraordinaire, Anzir, began talking about why we were here. Terminus is related to Hermes, the god of travel, and also we were in the bus terminus (the word is Roman – didn’t need a classicist to tell me that.) Anzir started to recite some words from the poet Ovid – and who hasn’t launched into a bit of 2,000 year old Latin verse in a bus station? It must happen so often the station manager must get bored, “Oh, not another Horatian Ode, please! That’s the fifth today. Come back when you can do some Mongolian Throat Chanting!” I do sympathise. As Anzir was reciting from a rather lengthy section of translated poetry a guy in a Hi-Viz jacket appeared behind him and began doing the “This is a really uncomfortable situation and I’m sorry but the only way I can handle it is by looking like I am desperate for a wee” jig. He waited politely till Anzir had finished and had taken a bow (only a metaphorical bow, but I bet that’s what he wanted.) Then he told us that we really oughtn’t to be doing what we’d just done and could we not do any more of the stuff he’d just watched us finish off doing, else he’d have to get his boss involved. Anzir said that we were just about to share a bag of mini eggs and he couldn’t see any reason why a couple of morsels of confectionery among friends would present a problematic public transport situation. But the guy in the Hi-Viz asked us to resist the treats until he’d been reassured by a higher authority that the ingestion of cheap chocolate in a built up area was within the bye-laws. The question is still moot as we had to leave for the next stop. I would have offered him some wine but he was working. 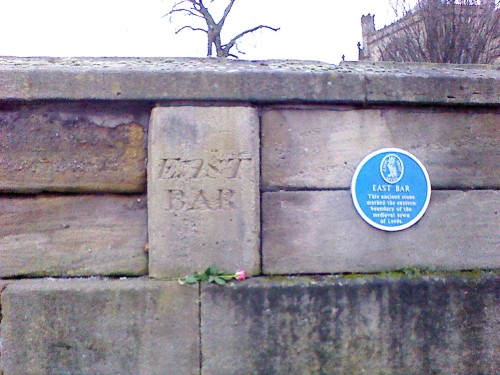 This is the real thing. An actual stone, marking the place where the city once stopped and the countryside began. It’s on the wall of the parish church, or Leeds Minster as we are meant to call it these days. And right beside The Palace pub. A proper piece of history. 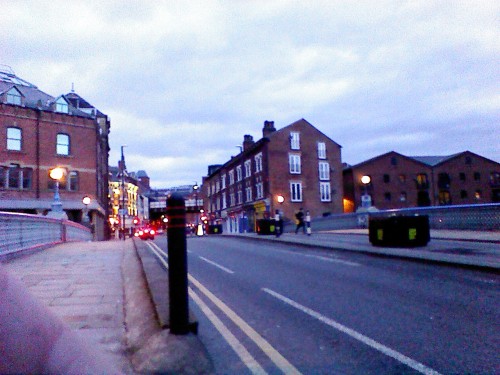 The South Bar is sadly behind the facade of the building across the road from the Jabez Tunnicliffe, Louis Le Prince plaques on Leeds Bridge (and stupidly the photos I took here all include a giant knuckle … if anyone can take better pics on an old Nexus 5 be my guest.) As we were all gathered here we noticed that the sign on The Tetley kept going on and off. Never realised that before. We drank to that. 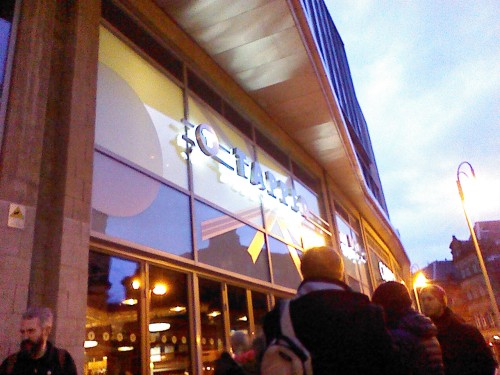 Next stop was the train station and more poetry from Anzir. Cake was shared, more alcohol was drank and another rose marked the spot. Anzir took a jar out of his bag that contained rose water and made us all sprinkle our skulls … I can’t for the life of me remember the exact point of the ritual but I smelled pretty for the rest of the evening. 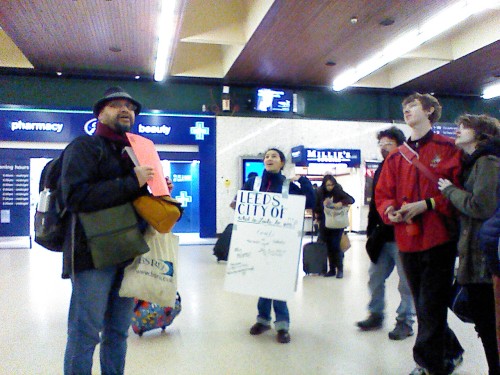 Then to the Burley Bar stone. The actual stone is inside the Building Society premises, so go and look. One of the interesting things I found out about this part of town was that the original Woodhouse Lane went through where the St John’s Centre is presently. The road was shifted, which if you look carefully is quite obvious. But most of us walk around the city half asleep and would never notice. 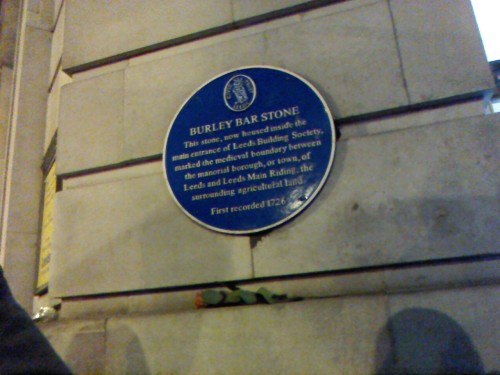 Our last stop was Dortmund Square. I was asked what I thought of the barrel man … it’s not great public art, is it, but then it’s not as pretentious as the dreadful Minerva on Briggate, and it is inoffensively jolly. We managed to string together a couple of garlands (and I forgot to mention that for most of the walk I was decked in a garland of daffodils, which was nice) and strung them around barrel man’s neck. Then we all went to the North Bar to complete our circumnavigation of the city. 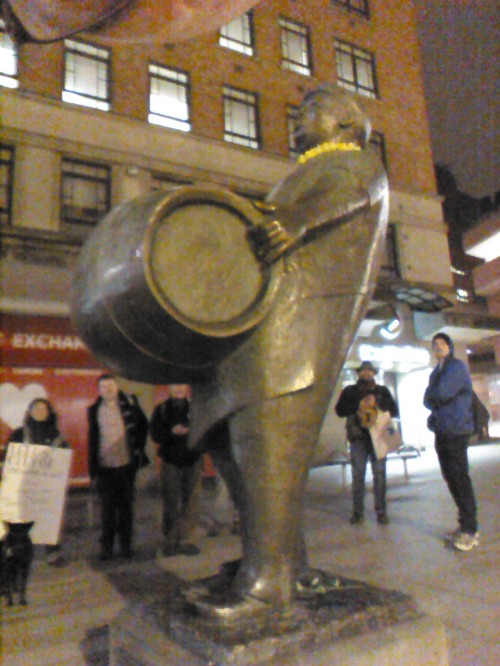 One of the loveliest things about last night’s adventure was walking a city I thought I knew well alongside people from different countries (even different continents, Hi Malu and Davide!) who asked questions I’d never have thought of and who were genuinely enthralled by what the place had to say for itself. It reminded me that we are blessed to live in such a fabulous city with so much going on. So, here’s to Leeds! A great companion with a bottle of wine.

The wine I chose to share (and sacrifice) was a Portugese Extra Special Douro 2012 – just the sort of thing to keep you going on a blustery Northern evening.