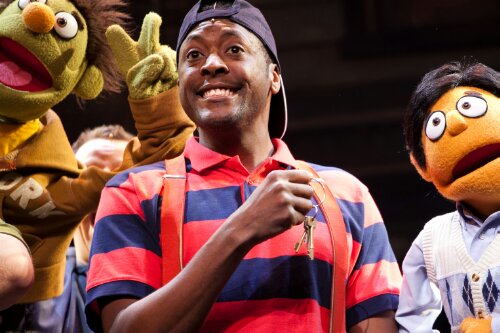 Lizzie Morrissey from @Guestlist_Leeds gets all warm and fuzzy inside about Avenue Q at Leeds Grand Theatre . . . warning, the review contains a string of rude words, but heck, we are all grown ups, aren’t we?

This is going to seem like an odd start to a review of Avenue Q, but bear with me because I’m going to tell you about my day…

Having had an early start at work, I’d gone from an early meeting, to another, to another with barely time to stuff lunch down my neck in-between meeting two and meeting three. Then, returning to the office, there was so much to do I started to feel panicked and stayed way later than I’d meant to, to try and get it all done.

Racing home I knew that I would have minutes to eat tea and get back out to the Grand Theatre to see Avenue Q. I’d rung ahead and instructed the ever patient Pete to make tea. I arrived home to masticate the casserole beef that he had considerately fried into un-chewable cubes and my mood was becoming as lovely as the British summer.  I had a ball of stress sitting on my diaphragm as big as a moody cow, and twice as effective. Kissing my chortling four year old, we fled the scene.

We dashed out to the car, I’d managed to forget any sort of coat (mood, worsening) and halfway to the theatre, Pete told me that I’d accidentally put the wrong time on the invitation to the Guest List Leeds party for Saturday. Shit shit shit shit shit. You know those times when you make an almighty cock up and you feel like hitting yourself in the head? Well, that was the mood I was in by the time we arrived at Leeds Grand Theatre.

We found our seats just in time for the theatre to darken and the lights to come up on the stage (well, I had found time to buy wine. You have to have wine, right?).

Within three minutes I was giggling, they’d immediately managed to get us to laugh about the very things that we fight about as a couple. Where previously I’d been glowering, we were exchanging knowing looks, tittering and holding hands. 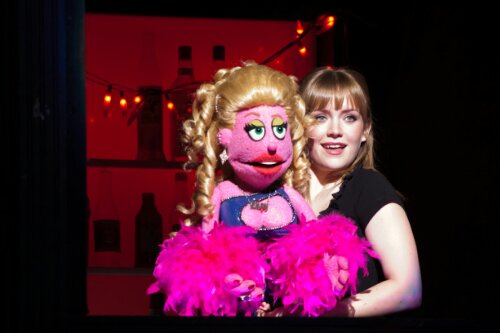 The genius of Avenue Q is in the age old fact that it’s ok to speak the truth about the rough corners of human nature if it’s said by puppets. Those puppets could say anything and get away with it. Between only seven people on stage, the show managed to make everyone of all backgrounds and ages connect through laughing at the wrongness we all have in common. With sleight of hand that David Blaine would envy, the puppeteers/performers (performerteers?) seamlessly magicked us into Avenue Q with smutty songs and hilariously suggestive dancing.

Avenue Q succeeded where ‘Meet the Feebles’ failed*.  At first I was unsure whether I would be able to fall for the scene, because it’s not just puppets on the stage, the performers are right there with them. But it actually works so beautifully because it’s like watching Siamese twins – only where one is furry and the other is expressive…

This interval is for your comfort, please take the time to use the facilities and buy refreshments.

There are no choc-ices available at the front of this review.

Sitting down to watch the second half, I remember thinking to myself ‘I may never want to watch another musical again’. Because this one is so perfect.

So here is my recipe for getting over a bad day.

Take one large, elaborate bowl. Fill with expectance of all ages, shapes and sizes. Mix endearing with a large dollop of uncomfortable truth, whirl in essence of Henson, and bake in observational humour for two and a half hours.  Slather with modern themes and lace with eternal human commonality.  Then, stick your tongue so far in your cheek you can lick your own funny bone, swallow it whole and enjoy the deliciously cheeky taste.

This is NOT a family recipe, but over 18’s will love the flavour.

By the time the well-deserved bows were taken, all of my stresses had melted away in the steamy comedy kitchen of Avenue Q.  Leaving only the fluffy happiness that comes with having laughed until my cheeks ached, and a small nugget of truth about people that took a whole car debate home to digest (still much easier  to digest than that boot leather beef I’d eaten earlier).

So even if you’re skint, DO IT and buy tickets. Consider me your Good Idea Bear. 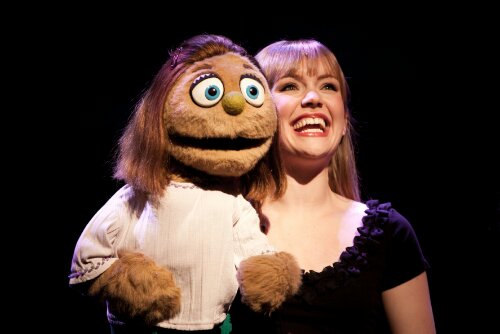 *Meet the Feebles is the really dark side of filthy puppetry – with more URGH than heehee.