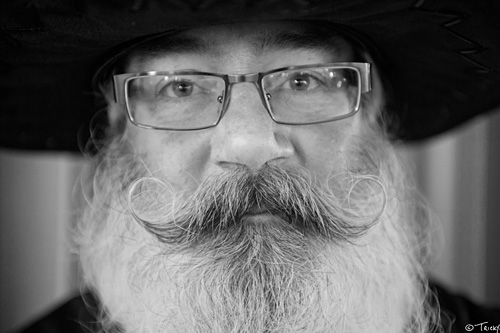 Regular readers may remember around a year ago I did an introduction to the world of Competitive Bearding, covering the World Beard and Moustache championships held in Norway.

This year will see the inaugural UK Championships hit Brighton in September, organised by the British Beard Club. As a little taster, Scarborough this weekend played host to a Northern Beard Meet-up, held at The Spa.

Billed as a relaxed family-friendly sunday afternoon filled with a mini beard championship, old music played on gramophones, beers (there was a tasty special cask of “Beloved is the Beard” ale (complete with brain blessed beer-clip label)), and later in the evening a gig by the bearded Louis Barabbas and The Bedlam Six. Funds raised were donated to the Prostate Cancer charity.

Being fans of beard competitions (travelling to Alaska and Norway to take photos of them, is, admittedly a little extreme), Julia and I packed our cameras and braved the driving rain and sleet on the A64 headed for the east coast.

It’s at this point I should admit I was inspired at the last world championships to grow a bit of a beard. Initially just to see what it was like as I’ve never gone beyond stubble before, which then lead into growing a cool moustache for Movember, and has somewhat persisted. Being the shy retiring type I wasn’t at all sure about entering a competition with my beard, but a nagging sense of responsibility made me grab some moustache wax on the way out of the house, just in-case I went a bit crazy.

We arrived to a very wet Scarborough. Oh so much rain! There was a worry it might keep away the crowds, but it certainly didn’t dampen spirits, and before long the sun cafe at The Spa was awash with slightly nervous-looking men (and women!) ready to do hairsuite battle. After a bit of beer and a study of the beard categories (and realising what i’ve grown so far is spot on for the Verdi category) I sheepishly threw my hat into the ring.

The thing I love about Beard (and Moustache) championships is the infectious sense of fun – they are by their very nature a bit silly, and it’s hard not to get a bit giddy 🙂 Case in point – the first person I asked to take a photo of was this lady: 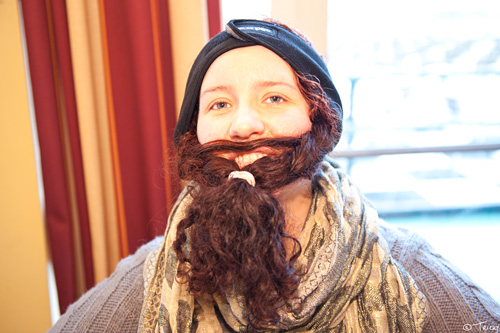 An impressive freestyle fake beard I think you’ll agree (unsurprisingly, she was entering the fake beard category). She excitedly blurted out that they’d only heard about the event a short time earlier – she and her (I assume) partner (possibly hostage?) were driving through the area, listening to local radio when they heard about the event – so excited they were about the concept of a beard championship they gave up the days original plans, and headed straight for The Spa. It’s this mad sensibility and throwing caution to the wind that makes me proud to be British 🙂

She wasn’t the only lady there entering the fake beard category either – there was loads – some who’d obviously put in a lot of thought and preparation for their fake beards (particularly the ladies from Radio York)! 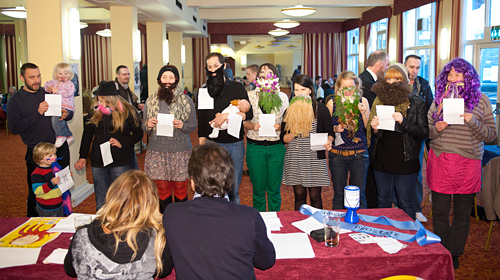 Through the afternoon the various categories were arbitrated by these 2 lovely judges (note the heretic lack of beards -shocking): 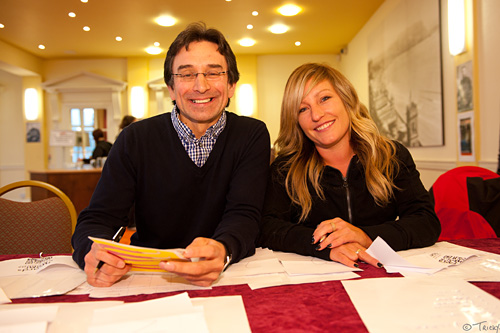 Judging is via the following steps for each beard category:

1. Standing in a line infront of the judges for them to compare and contrast your fine beardly wares collectively 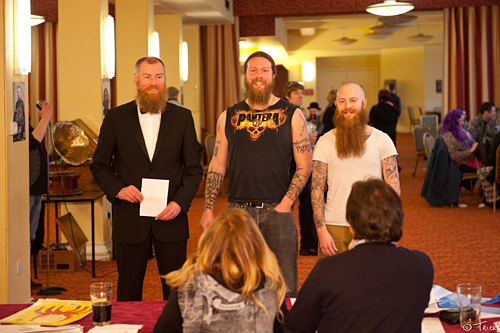 2. Parading around the room to the cheers and applause of those in attendance (playing up to the audience optional, but very much encouraged and appreciated) 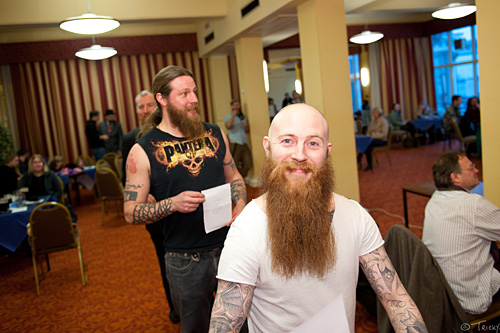 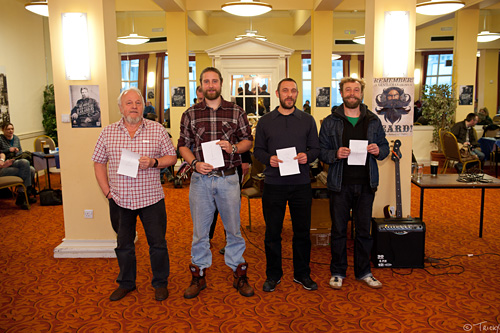 3. Each taking it in turn to stand infront of the judges, answering questions and showing off your beard to the best of your manly ability. Showing off a bit here can make all the difference between a winner and an also-ran. May I present the Usain Bolt: 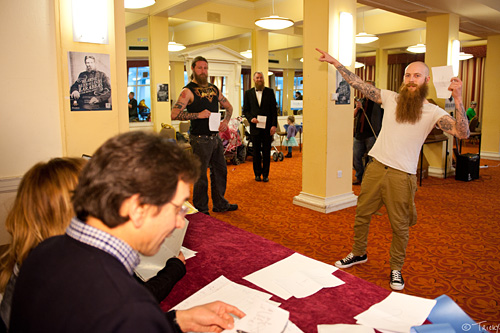 The top 3 contestants in each category were duly awarded, with the actual placings to be announced at the half-time break in the Louis Barabbas gig later on — ooh, tension!

So what of my attempt? Ahem. 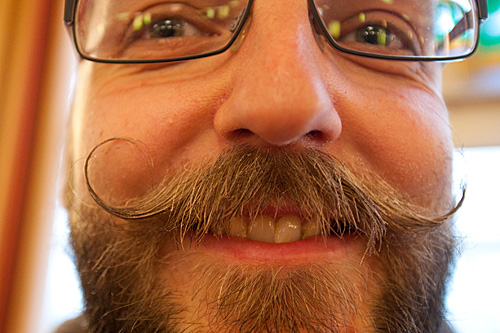 (I should point out the sky is blowing out the right-hand part of the tash, and I probably should have given it a trim beforehand! )

For a while I thought I was going to be the only entrant in the category (and with hindsight I’m quite happy in the end that I had some competition – the whooping and applause reserved for the parading of one entrant in a category to himself was really quite terrifying!).

May I present: My Nemesis (also known as Jim Middleton) 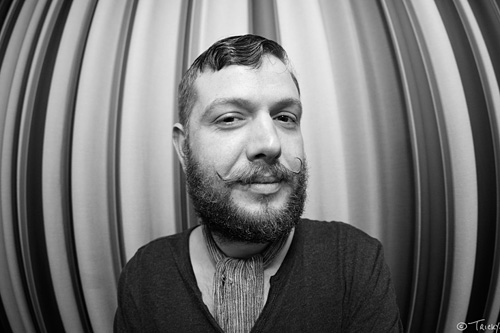 A fine, fine beard I think you’ll agree, with a coiffured head of hair seemingly purposefully designed to mock my receding hairline. He was even taller than me (if you’ve ever met me you’ll know this is a mean feat  – i’m 6ft4). He even made his own moustache wax. I wasn’t going to stand a chance.

But enough about me, I’m a photographer and here’s the main reason I went:

Finally to round off the evening was an excellent gig in The Spa’s Theatre by Louis Barabbas and The Bedlam Six singing a surprising amount of up-tempo songs about dispatching an ex wife!) 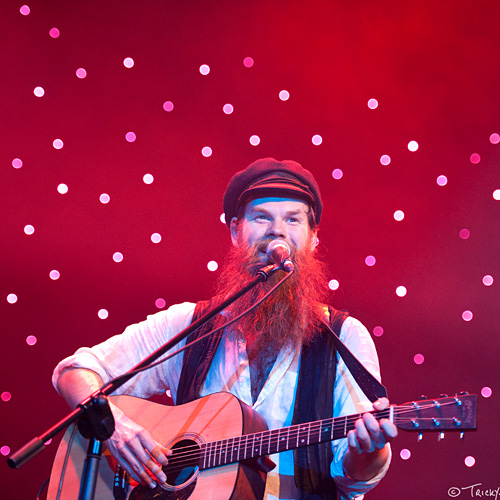 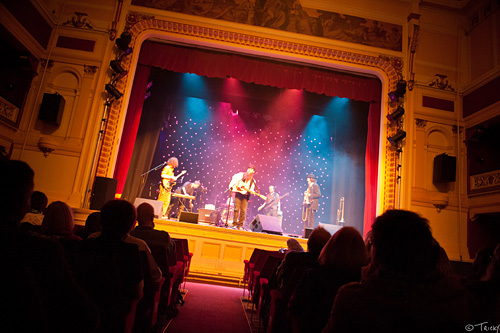 All in all an excellent, silly, and very funny day out. And if any of this appeals, you’ve still plenty of time to grow something for the UK championships in September – the world championship medals are usually dominated by the Germans and the Americans – maybe it’s time we upped our game 😉 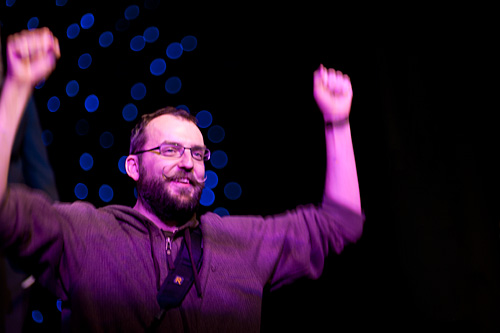 Rick Harrison is the Northern UK Champion of the Verdi Beard. When he’s not waxing his moustache he’s a freelance photographer, and the Culture Vulture’s photography Editor. You can find him lurking on twitter as @sovietuk