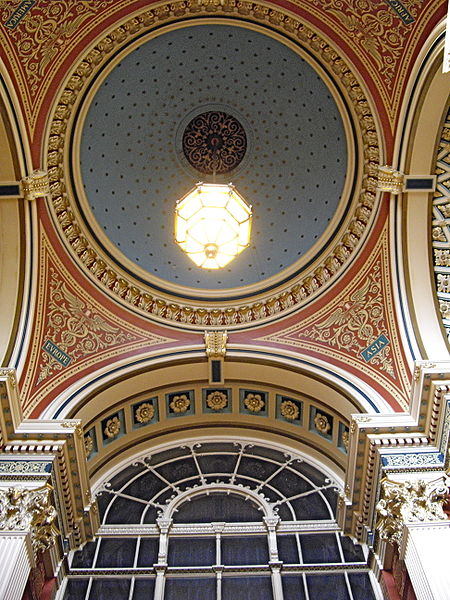 The Victoria Hall, housed as Leeds’ principal concert venue within the city’s wedding-cake-like town hall, resonates with familial charm for this reviewer. The redecoration and renovation of its florid, marbled interior in the 1970s was partly planned by his father, who is now a pensioner. There was a sense therefore, on a human scale, of both the very old and the very young about the lunchtime concert of 10th September. This was compounded by the fact that the college choir brimmed with the vigour of youth before an audience dominated by pensioners. A certain irony arose therefore that the often liturgical, and certainly ecclesiastical, sagacity of the texts – though the detail did smack of tangents of circular logic – was being imparted from young to old. Nevertheless, it was conveyed very tightly and accurately, with a passion imparted through tempered and stark dynamic contrasts, and, for the most part, with excellent diction.

Dove came first with a setting of Psalm 139: ‘Seek Him that maketh the Seven Stars’. Accompanied on the organ with tranquil agitation in the treble that had an almost Bach-like, mathematical quality, lulling repetitions of refrains combined well-blended and stark dynamic contrasts that were conveyed here with near prefect diction. Next came Whitacre’s ‘This Marriage’. An a cappella offering, the choir sang as one and were in unison temporarily. Here the titularly implied meeting of feminine and masculine was compounded by the arrangement, conveying hope, innocence, and yet maturity, with profoundly contrasting harmonies.

Macmillan’s ‘New Song’ followed. This time with organ accompaniment, soprano and alto parts were given the initial passages, later to be joined by the men. Remarkable in this piece were the sustained and gradually building dissonances that led to energised agitation in the organ, almost as release and response. Well placed turns in vocal lines were executed without difficulty and quite smoothly. As though to compound the earlier dissonant vocal build and organ release technique, the piece ended with sustained, forte chords on the organ as though to magnify the close. Whitacre made another appearance with a setting of e e Cummings’s ‘I thank you, God, for this most amazing day’. Here, a genuine sense of profundity was expressed with both the intonation, the choral mix of the arrangement and the multiplicity of upper and lower suspensions. The contrasting tonal constellations of the second verse were put across with a well-executed sense of, perhaps heavenly, permanence in the employment of upper pedals in the female voices. A key change with modal, rising passages was made light work of by this superb choir, resolving downwards in sequence, yet ending on an unresolved suspension. This dissonance was convincing and sung with bold confidence.

Dove appeared again: ‘Vast Ocean of Light’. With organ accompaniment, bassless female vocal parts entered for the initial passages. Agitation was conveyed in the treble of the organ. Much use of the major seventh – difficult to sing, not for this choir – conveyed ecstatic abandon. Excellent dynamic contrasts were employed perhaps at the expense of diction in this case. Nevertheless, the close was crisp and moving. Hooper’s ‘In noctem’ from Harry Potter and the Half-Blood Prince followed – a piece for which this choir have a special connection. It was a simple piece compared with the others. However, the simplicity was somewhat mesmeric owing to the accuracy of the execution.

Four movements from Bednall’s ‘Welcome all wonders’ came next. The a cappella ‘Alleluia’ alternated between joyous and lugubrious, and was followed by the slow, anodyne, accompanied ‘Ye Heavens from high’. The slow, a cappella ‘I saw a stable’ conveyed a sense of compassion and warning. The highly complex ‘Tribus miraculis ornatum’ reinforced the sense of measured contrast between these beautiful renditions. Parry’s ‘Coronation Anthem (1902): I was Glad’ rounded off this musical offering with memories of last year’s royal wedding. However, Owen Rees’s was a considerably different interpretation. More modest and measured, this seemed to speak more strongly of the message of peace.

These Monday lunchtime concerts continue until the beginning of December. If the subsequent performances match the quality of the Choir of Queen’s College Oxford, they are not to be missed . If you find yourself presented with an opportunity to hear the Choir of Queen’s College Oxford, do attend. Such accuracy, measure, grace, control and balance is a rarity in the normal course of events.