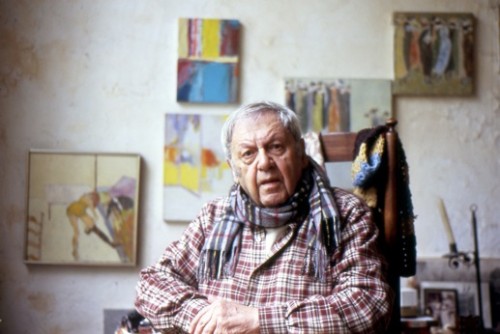 Bradford’s Sajjad Khan reviews this independent photography documentary and labour of love, In No Great Hurry. Due for a limited UK release later this month.

One of the most fascinating things about film is that it can open up a window to new and interesting subjects. The focus of this documentary isn’t someone new, but an old and steadfast photographer: Saul Leiter. He’s in his eighties, has been taking photographs professionally for almost six decades and lives in his small apartment in New York just as long. The film follows and looks at this man’s life and work, in which we find a lot about his methods but never the mystery behind his genius.

Saul Leiter is a colour photographer who’s worked at a steady pace making unique and abstract pictures. They look deliberately opaque in their beautiful geometrical compositions with a hint of colour – well, that is, to this viewer with an untrained eye for photography. Yet the works feel intimate and so is the tone of this documentary. Leiter allows filmmaker Tomas Leach to interview and follow him on his daily business. It’s a modest one about a reticent man who often chuckles about his accomplishments.

The film is set in thirteen lessons, which serve as a framework for Leiter to reflect on a wide range of subjects such as fame, nature of art, his methods and the existence of God. He’s a thoughtful man who likes being invisible yet takes pride in his work. But the lessons focused in the documentary can also apply to any other kind of artistic life. The creative life is Leiter’s great achievements—and it’s the kind of superlative he probably dislikes. However this type of life comes at a cost—he never compromised and wasn’t swayed easily by fame. At one point he says “I prefer to photograph a raindrop than a celebrity”. This isn’t a criticism but him explaining his art.

For instance, when he worked for a glossy fashion magazine in the 1960s it didn’t mar his development but gave him the opportunity to keep on experimenting. The strength of the documentary is that it allows Leiter to speak rather than have your usual talking heads. In doing so, we spend a good time in his unkempt apartment with piles of pictures and objects scattered across the room; as for him it creates a feeling of ‘pleasant chaos’. It serves as a contrast to his pictures, in which he finds beauty and order in the bustling and ever changing nature of his city. The world has changed but his way of seeing remains constant and curious. However, Leiter’s life is not all sanguine. He talks about his breaking away from his orthodox Jewish heritage and the loss of his life partner.  The filmmaker is careful not to press too hard with his question, but he does get told off. Leiter argues about the validity of the film and his annoyance of people asking him why he takes photographs. It’s the conviction of an artist whose preoccupation of aesthetic beauty frees him from those questions and mundane concerns. Leiter knows this, and doesn’t feel “important” about it, but his pursuit of beauty is.

Near the end, he talks about how some find the works of Auguste Renoir too sickly and some in art prefer to look at the ‘wretchedness’ of life. You clearly know he prefers the former, but isn’t forceful in his views. You realise that all the way, he’s quiet and convincing in his lessons to you. He’s in no great hurry to make a point and it adds to the mystery.

You can find out more about In No Great Hurry, including public screening listings on the film’s official website InNoGreatHurry.com

In No Great Hurry is released in the UK June 24th and opens at the ICA with a director Q&A on June 27th. For more info: www.innogreathurry.com.
Tomas Leach is a documentary and commercials director based in London. This is his first feature.