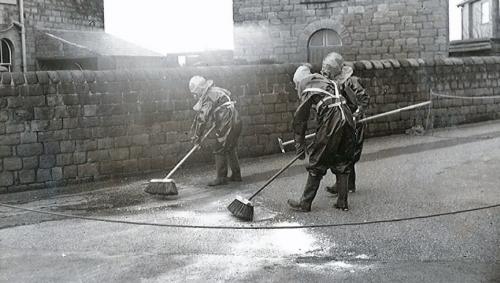 When we think of WWII bombing raids, it is not usually West Yorkshire that comes to mind. The effects on cities such as London, Coventry & Liverpool were devastating & therefore more widely known. However, Leeds did have its own ‘Dark Night’ 70 years ago this month, when 65 people were killed.  West Yorkshire Archive Service has been using twitter to share the information that is scattered across a wide range of sources and documents, to reveal life during the air raids in Leeds.

Why did you embark on this project?

“Archive documents can reveal a great deal about the way that people lived their lives, & as original documents written at the time, can be very immediate. The interesting aspect of something like the air raids was a rare opportunity to bring together different voices, the actions of different services that are scattered through different collections, & use them all to create one story of Leeds.”

Why have you used twitter to tell this story?

“By their very nature, archives can require a lot of research & time studying one aspect, as the relevant documents can be scattered across collections. However, this is the story of one event, & our archivists already knew which documents were likely to be of use, so it was a way for us to show how archives are not dry & dusty documents! Unlike diary entries, that suit themselves to blog posts, lot’s of the entries for the air raids are single line reports that are perfect for twitter.”

What kind of records have you used for this?

“We have brought together information from a wide variety of sources. The obvious ones include Fire Service and Hospital records, but we have also used school log books (frequent accounts of events in  school written by the headteacher) and private company records. The single most useful collection has been that of the county Civil Defence & Air Raid Precaution dept.”

Follow the events as recorded in the documents held in Leeds & Wakefield Archives, as they unfold in real time on twitter @WR_ARP

The following is an abridged version of the blog entry about the night of the Leeds air raids, on WYAS catablog; copyright WYAS.

Just after 9 o’clock on the evening of the Friday 14th March, Air Raid Sirens across the City sounded the ‘alert’. Fire watchers on the roof of the Turner Tanning Machinery Company in Bramley reported planes flying from the East to the North West at 9.15pm [reference: WYL1063, WYAS4922] and shortly after that the City was hit repeatedly and was quickly ablaze. Just before midnight a large number of incendiary bombs followed by high explosive bombs fell over a wide area of the City causing widespread damage.

The bombs damaged around 4600 houses as well as hitting Kirkgate Market, the Town Hall and the Museum which was, at that time, on Park Row. The log book for the infants department of Leeds St Peter’s school details the damage caused by a bomb which exploded within a few feet of the south wall [ref: RDP68/67/8].

65 people including 8 children died that night and a further 258 were injured. Despite the entrance to the casualty department being hit by a bomb, the Leeds General Infirmary Air Raid In-Patients book [ref: WYL2295/240] shows that 59 people were admitted in the early hours of the 15th March with injuries ranging from burns to shock.

Over 4000 Wardens and 1800 fire crew were on hand to assist the public. Fire services were called out to 116 fires caused by enemy action through the night. The Leeds City Fire Brigade record book [ref: LC/FIRE/1/1/8] shows when the fire crews were called out to each address and the method used to put each fire out.

Although Leeds was the main target of the raid it was not the only town to suffer – the raiders bombed a wide area searching for the David Brown Factory at Crossland Moor near Huddersfield (manufacturing Spitfire parts at the time); and central Castleford suffered as bombs rained down in the hope of hitting either Ferrybridge Power Station or Hickson and Welch Chemicals.

In all, 25 tons of bombs were dropped in Leeds (a quarter of the 100 tons that constituted a ‘major raid’) but the City quickly got back on its feet and learnt valuable lessons from the 14th and 15th of March. In light of their experience, people were advised to keep all their doors unlocked throughout the raid, leaving windows and internal doors slightly open to avoid the effect of the blast; to keep extra black-out material in case the blinds are destroyed; to make sure that lights in a damaged room are extinguished at once; and to always carry their identity card.

Resolved – That the Committee record their praise and admiration of the courage and fortitude of the citizens of Leeds during the recent air raid on the City, and of the splendid support given to the Fire Services by the voluntary fire parties in dealing with incendiary bombs [ref: LL7/1/3/6]

For more information on any of these records please contact archives@wyjs.org.uk