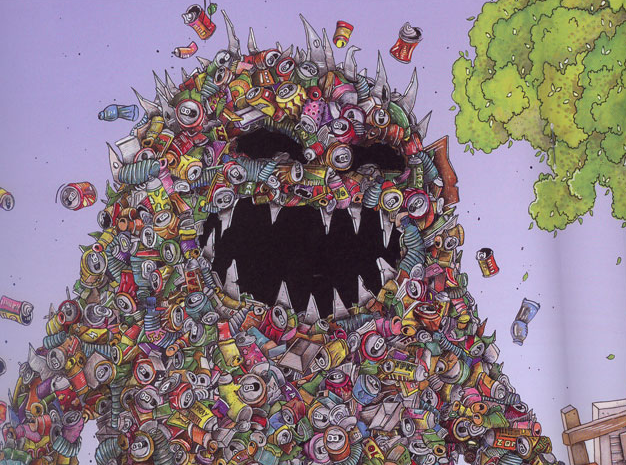 Jonathan Jones writes in The Guardian: Modern art is rubbish? Why mistaking artworks for trash proves their worth

JJ: Another exhibit has been bagged up and put in a bin by cleaners, but this common mistake shows just how radical contemporary art can be. 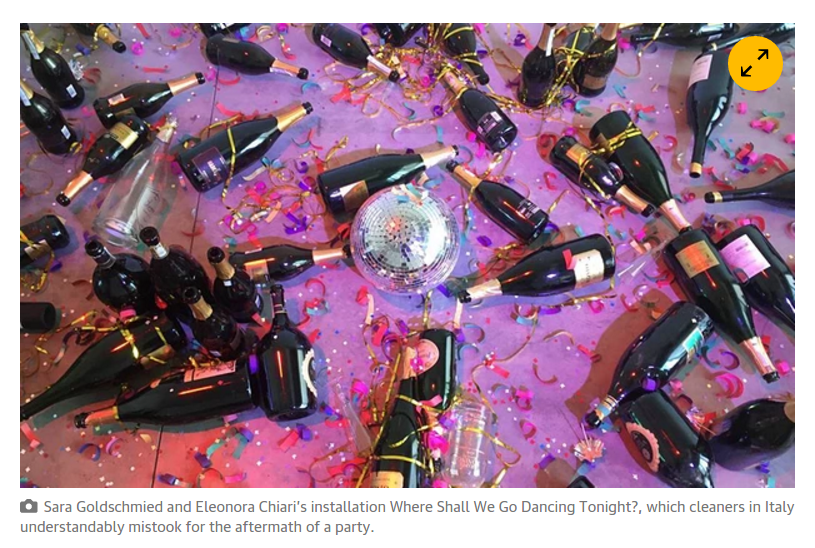 PK: This isn’t the first time, then? It’s been done before? Lots? What’s the story this time?

JJ: Sara Goldschmied and Eleonora Chiari’s installation Where Shall We Go Dancing Tonight?, which cleaners in Italy understandably mistook for the aftermath of a party.

PK: So, the mistake is “understandable”? You can see why this might have ended up in a skip? It looks like rubbish?

JJ: Is modern art rubbish? The question hangs in the air like the stale smell of last night’s ashtray whenever art gallery cleaners stuff an installation into black sacks and leave it out for the bin men.

PK: Well, Jonathan, galleries don’t clean themselves, do they? Someone has to deal with those ashtrays.

JJ: It has happened to Damien Hirst, Tracey Emin and other contemporary artists, and now it has happened to Milan’s Sara Goldschmied and Eleonora Chiari, whose installation Where Shall We Go Dancing Tonight? was swept away in its entirety by cleaners at the Museion in Bolzano, northern Italy.

PK: Silly cleaners. Cleaning up stuff that looks like rubbish. After a party involving a lot of booze. Doing what they are paid (a pittance) to do.

JJ: To be fair, the museum’s cleaners were presented with a genuine conceptual challenge.

PK: Yes, let’s be fair. Cleaners aren’t paid to deal with “conceptual challenges” are they. They ought to stick to things they know, like tidying up, sweeping, mopping.

JJ: They were told to clean up after an evening event – get rid of the empty wine bottles, that sort of thing.

JJ: Goldschmied and Chiari’s exhibition, a comment on the corruption of 1980s Italy that tried to evoke the decadence portrayed in Paolo Sorrentino’s film Il Divo about that same era, was a careful recreation of the aftermath of a party with lots of empty wine bottles everywhere. You can see how the confusion arose.

PK: Oh, I can see all right. I once tried this tactic on my mum when my parents had gone away for the night and friends turned up with a crate of beer and all the Southern Comfort they could steal from Grandways. No mum, I said, I can see how the confusion arose… we haven’t trashed the house, wrecked the garden, or traumatised the dog, but I can see how the confusion arose – those piles of vomit are merely a loving homage to the decadence portrayed in the last Sex Pistols video.

JJ: Yet, far from being a condemnation of contemporary art, this habit cleaners have of mistaking it for rubbish is proof of its enduring vitality, or at least, indestructible novelty. Artists have been bringing rubbish, the stuff of everyday life that we use and throw away, into the gallery for more than a century now – ever since Picasso stuck bits of newspaper and chair caning to his paintings.

PK: Hmm, Jonathan you may want to Google the definition of habit. My dictionary says that a habit is the direct opposite of novelty… oh, and while you are at it I’d have a shufty at the word indestructible too.

And surely if artists have been bringing rubbish into the gallery for a century or so the gesture may have turned a little stale?

JJ: Cleaners have presumably been throwing it away for more than 100 years, too. Most of the first readymades have vanished – modern icons such as Marcel Duchamp’s urinal, bicycle wheel,bottle rack and snow shovel were lost long ago and had to be remade in the 1960s. Were the originals simply chucked in the bin?

PK: I can’t say, Jonathan. Bloody ignorant cleaners may have dumped Duchamp. But my guess is that it’s more likely the stuff simply went out of fashion and got the black bag treatment by the gallery owners when something more investable came along. It’s a thought?

JJ: This art has been around for so long that, by rights, it ought to have become safe and cosy. In many ways it has. Visitors to Tate Modern stare respectfully at garden shrubberies or Duchamp’s (remade) pissoir. But still, the cleaners keep chucking stuff away – cussed working-class critics of modern art who are the last bastions of criticism now that Brian Sewell has gone.

PK: Oh dear, the damned uneducated don’t have enough “respect” for a superannuated gesture that’s been rehashed so many times that sophisticated people barely stifle a yawn. And nice dig at the very recently deceased Brian Sewell… The cleaners would have had more class.

JJ: Museums and artists don’t really mind. In Bolzano, they will just open another bottle. And why? Because as long as someone thinks modern art is rubbish, it is still provocative. It is still dangerous. Never mind that it sells for millions, and is enshrined with religious fervour in the world’s most powerful museums. Contemporary art may have all the hallmarks of establishment culture, but it is still Challenging, Subversive and Radical. It must be. The cleaners are still throwing it away.

PK: I imagine artists don’t mind. It’s just a game. Break out the Champers! Just send someone down the tip and get a cartload more art and say it’s a site specific, interactive, participatory project; who’ll notice?

Sorry, no, Jonathan, I’m not convinced – rubbish is not “provocative.” For some people rubbish is what they have to deal with to make ends meet. It’s about as “dangerous” as a full ashtray. And the only time a wine bottle is dangerous is when it’s full of petrol and has an old rag instead of a cork. It’s an absolute disgrace that crap “sells for millions” and the rich are gormless enough to “enshrine” it with slack-jawed religiousity.