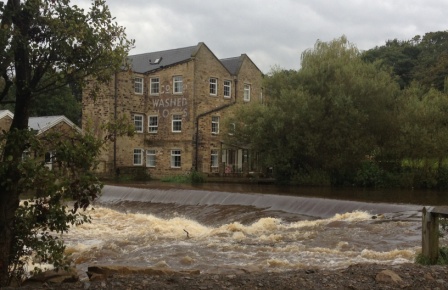 Water, water everywhere nor any drop to drink, as the old rhyme goes. And the old rhyme is correct. We are surrounded by water – especially us British, who spend more time splish-splashing our way through puddles, picnicking under cagoules and fighting with wind-damaged umbrellas than doing almost anything else. The thing is, apart from cursing the endless rainfall, I’ve not ever really, properly considered my relationship with water, despite the fact I grew up less than a quarter of a mile from the edge of the Thames, and have been living in Armley and walking past the canal every working day for almost four years. Water is just there isn’t it? Unless I’m thirsty, dirty, or hot I don’t give it much thought. And as I’ve rarely had water-based discussions with friends or acquaintances I’d imagine I’m not alone in terms of my ignorance in this particular area.

Water was the central theme of Multi-Story Water, a performance event comprising three theatrical tours of Shipley’s river and canal which I undertook on Friday 21st September (after a nightmarish bus/train journey that meant I was fifteen minutes late for the first tour – grrr). Each tour explored a different facet of the relationship between the people of Shipley and Saltaire and the local waterways, and in the process offered an intricate map of local history which spanned the planning and creation of Saltaire village by wealthy Bradford baron Titus Salt, the building of the Coach Road estate, and the great flood of 2000.

The website documenting the Multi-Story project states that the performances are intended to engage audiences in conservation and environmental change in their local area. To be honest, these words made me nervous – I worried that the ecological aims of the project would result in a patronising, preachy performance-lecture tediously disengaged from the realities of daily life. Happily though, there was no eco-preaching; just gentle nods along the routes that served as a reminder: we humans live alongside nature and can both alter and be altered by the water. A story detailing the pollution of the River Aire; a bathing place for locals transformed into a toxic sludge and eventually cleaned up so that wildlife could once again inhabit the water, illustrated one way in which the human-water relationship has played out over the years. 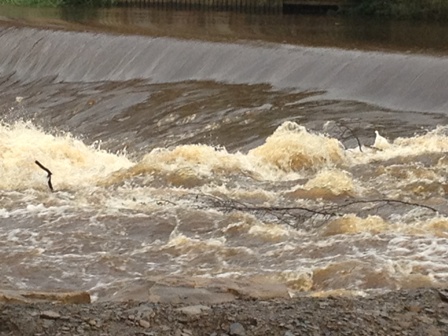 When I first read about the performance, I was most excited by the promise of a canal boat tour along the Leeds-Liverpool canal. Though my childish penchant for boat rides was sated by the picturesque journey – and Eddie Lawler’s sing-a-long waterway ditties that punctuated the more factual narrative of the canal’s history provided by Professor Steve Bottoms – I was surprised that I enjoyed the walking tours so much more.

I’m a little bit anxious about writing these words, but, as a displaced Londoner I’ve often secretly felt the kind of condescending cultural superiority that I’ve heard the people of Yorkshire describe as characteristic of us Southerners. It’s been difficult for me to get a grip on any sense of culture here, apart from a kind of endless nostalgia invoked by the dilapidated mills, factories and collieries that haven’t yet been ‘developed’ into futuristic apartment complexes. But, as I sploshed my feet through Roberts Park, and down the water-logged alleyways of Lower Holme, the personal stories of local people, brought to life by actors David Smith, Lynsey Jones and Richard Galloway in a series of monologues, slowly eroded my Southern snobbery. It was something about the walking; physically tracing the steps of other people’s journeys – and the careful direction of Simon Brewis which had us leaning back from the river edge to take in the span of the sky, that made the post industrial-landscape more than a collection of empty buildings. 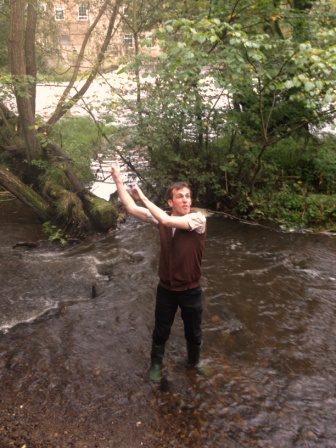 Here was a landscape rich in personal and social history, which we walked in a living map made of the physical development of the banks of the canal, intertwined with the stories of those who have shaped it: from the president of the working men’s club whose house became a temporary modern-day Atlantis during the flood of 2000, to the developer responsible for turning Victoria Mill into a collection of sleek apartments. As a fellow walker said to me at the end of the last tour ‘I might be lost, geographically speaking, but I don’t feel lost; I feel like I know the essence of this place now.’

The richness of life in Yorkshire won’t be a surprise to most people reading this, I’m sure. But, Southern snob or not, as someone who has grown up in a generation obsessed with expensive overseas travel and the discovery of cultures afar, these tours have reminded me of the vibrancy and depth of British culture. There’s no need to spend a year in Thailand wearing loose fitting cotton pants and drinking cocktails from a coconut, we’ve got culture flowing right here, though the rivers of God’s Own County. Which is good news for my bank account. 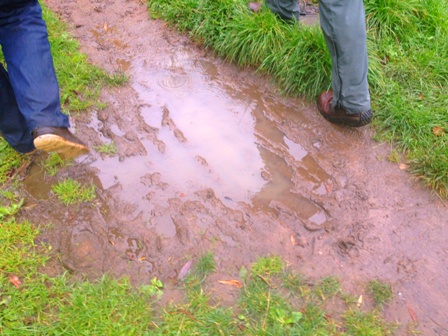