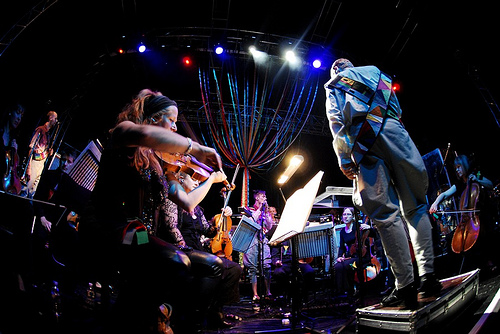 Returning to the venue to showcase new material, Alfred Darlington is back to blow our socks off with his unique brand of experimental electronic music, blending heavy beats and abstract synths along with samples from all over the shop, from latin to string ensembles to big band.  Wherever his new soundscapes may take us, this is bound to be an exciting night.  The gig is in celebration of promoters Room 237’s fourth birthday who will also host an aftershow-party at Beaverworks, with a party-bus leaving after Daedelus’ set.   Tickets available from Crash, Jumbo, Room 237 or on the door.

The BBC’s Philharmonic Orchestra return to Leeds Town Hall, this time led by conductor Vassily Sinaisky.  The orchestra will perform Mendelssohn Violin Concerto and Shostakovich Symphony No. 15 and there will be a pre-concert discussion of the pieces.  The performance is part of Leeds International Concert Season and tickets are free, though should be booked early to avoid disappointment.

Sapphic Traffic is a fledgling DIY/queer club-night of disco and dance taking place at the Common Place for all shapes, sizes, genders and sexualities.  They provide an all-inclusive, non-judgemental space as well as bringing to the table some pretty rad tunes.  Pre-dancing this month features a showing of RISE ABOVE: The Tribe 8 Documentary, on the San Francisco-based ‘dyke punk rock’ band, and performance from their ex-singer, Lynnee Breedlove.

Returning for its fourth year and bigger and better than ever, Brainwash Festival showcases an eclectic mix of local talent and bands from around the world.  This year’s highlights include Oceansize and Denmark’s Efterklang, who pulled off a stunning Leeds gig along with full orchestra back in June, as well as local favourites such as Bear Driver (fresh from the Summer festival circuit), Pulled Apart by Horses and Worriedaboutsatan.  The festival is run not-for-profit and any proceeds go to charity.  Visit the website for a full list of bands and to purchase tickets.

To celebrate the end of their 25th anniversary season (they started putting on gigs on Saturday 20th October, 1984), Leeds Jazz are throwing this weekend-long party consisting of four jam-packed gigs and a film showing.  The nights can be attended separately or a special all-in-one ticket can be bought from the website covering Thursday – Monday.