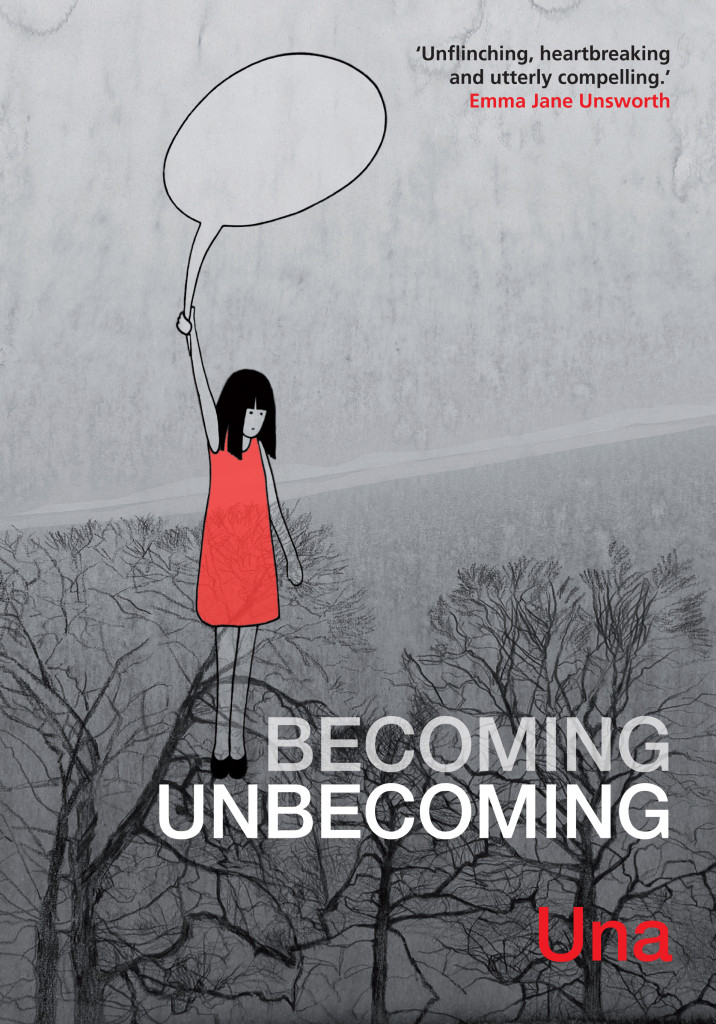 It’s 1977 and Una is twelve. A serial murderer is at large in West Yorkshire and the police are struggling to solve the case – despite spending more than two million man-hours hunting the killer and interviewing the man himself no less than nine times. As this national news story unfolds around her, Una finds herself on the receiving end of a series of violent acts for which she feels she is to blame.

Through image and text Becoming, Unbecoming explores what it means to grow up in a culture where male violence goes unpunished and unquestioned. With the benefit of hindsight Una explores her experience, wonders if anything has really changed and challenges a global culture that demands that the victims of violence pay its cost.

It’s a powerful premise, and as such represents almost a daunting prospect to read but from the first page, gorgeously illustrated with a stark, yet delicate image of a woman struggling up a hill under the weight of a bubble of silence, I was absolutely riveted. I finished the book in under an hour, finally returning to my senses with a screamingly full bladder and began telling everyone, immediately that this was one of the most moving graphic novels that I had ever read.

Strangely enough I have one shelf in my living room groaning under the weight of books about Feminism and sexuality and the shelf directly under it is reserved for graphic novels and books written by people that I actually know/have met. This is the first book for me that has not only united but transcended those shelves and I am very much looking forward to An Evening With Una at Waterstones this week.

Despite some of our best intentions to be aware of rape culture, slut shaming, victim shaming and our media’s absolutely sickening and disgusting contributions to fostering the poisonous atmosphere in which these issues thrive, this novel highlights in a very relatable and therefore quite frightening way just how easy it is for a person to be damaged. Not just damaged by the act of sexual violence, but damaged by the attitudes of others.

We would hopefully all agree that “isn’t rape awful?” and “isn’t it a shame that it isn’t reported more?” but we’re still raising little girls to be good and avoid getting raped because bad things don’t happen to good little girls who dress a certain way and act a certain way and don’t go out at night (victim shaming starts with Santa only bringing presents to the good little girls…) instead of turning it around and raising little boys to NOT RAPE PEOPLE PLEASE.

And yes I am not ignoring the fact that men are also victims of sexual violence, but as is pointed out in the book, male perpetrators make up 98% of the statistic. And yes I know that I shouldn’t start a sentence with the word and. Twice. There are bigger issues to focus on here, ok?

There was a lovely video launched earlier this year comparing sexual consent to tea and it was recently adopted by Thames Valley Police as part of the #ConsentIsEverything campaign. Campaigns like this are wonderful but are a drop of water against a tide of patriarchy and we need more. We need to turn the tide.

So buy this book. Buy it, read it, tell everyone about it and buy everyone a copy for Christmas.
The fabulous OK Comics in Thornton’s Arcade are stocking copies complete with a free sketch signed by the author.