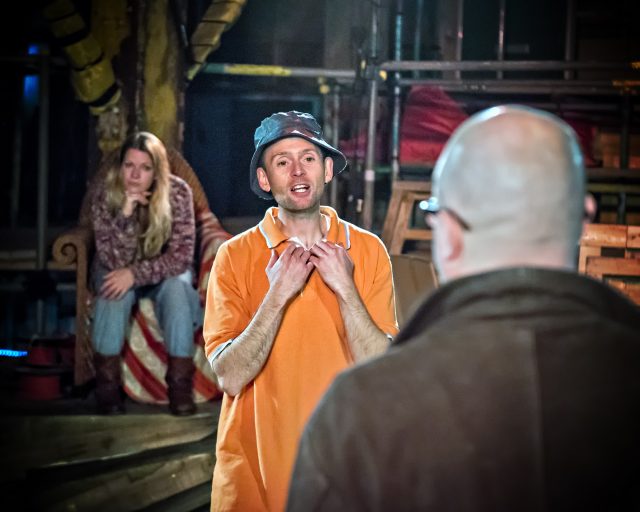 This is a show that made me, as a reviewer, uncomfortable. Not only physically.

Director Rod Dixon tells us he “didn’t want audiences to sit passively in a velvet space watching the story unfold from the distance of an auditorium”. Staging it in the Albion Electric Warehouse certainly achieves that, and creates an urban industrial aesthetic that feels real because it is real – or as real as the health and safety inspector would allow.

The audience is not so much ushered as herded from a makeshift bar into a loading bay between two shutter doors. The action literally unfolds above and around us before we’re admitted to the grimy, grungy lair of the Shed Crew. We perch on planks and scaffolding as characters squeeze through us, high on booze or glue or the adrenaline of being chased by the Babylon after a TWOCing.

TWOCing. Yep, we’re back in the 90s. I’m also uncomfortable because this isn’t the world I knew then, of coming Blairite aspiration and Things Can Only Get Better. This is Ashtrayland.

“We were totally off the lead, we took care of our own needs and we grew like rampant weeds in the financial flower-bed of the North. Yes, we were Thatcher’s illegitimate bastards but we didn’t need saving, we were children of the rave scene and we knew how to party in the graveyard of Leeds.”

The Shed Crew is based on Leeds writer Bernard Hare’s cult 2005 memoir Urban Grimshaw and the Shed Crew. It’s a memoir not a novel.

Hare returned to Leeds after becoming disillusioned with his job as a social worker in London. He met ‘Urban’ and through him learned of the Shed Crew – children, some shockingly young at just 9 or 10, who dropped out of school and dropped out of sight, often abandoned by dysfunctional families.

‘Chop’ , as Hare was known, became a kind of benign authority or father figure to the group, the only adult in their lives they could trust. 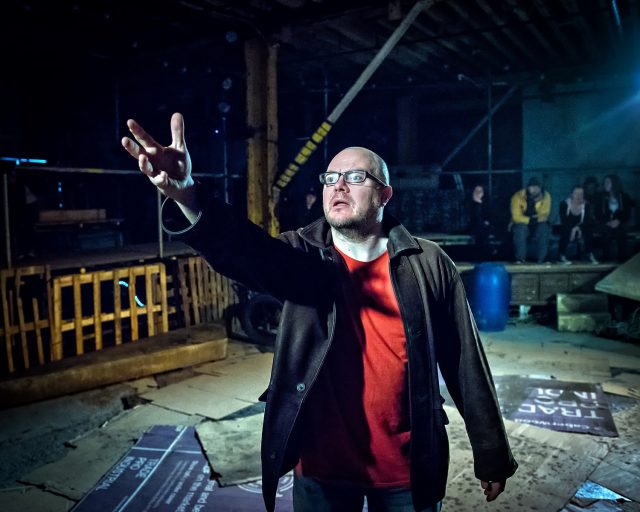 Jamie Smelt as Chop is never off stage as the fast-moving action swirls around him.

It’s a brilliant performance as he navigates his character’s complex personality. Chop is no saint, in fact he seems to get an unseemly thrill out of dabbling in the youngsters’ counter culture. One minute railing against the dangers of inhaling butane, the next crashing with a hit of smack, or crashing his untaxed and uninsured van.

But he’s no nonce. Abused girls can trust him in a world where every man takes advantage.

He’s no grass either, sticking with the Crew’s story against the police when convention would have him pleading clemency from his position of at least semi-professional privilege. He’s a man conflicted, with his failings laid raw. In between the wild nights and the drugs he brings poetry and chess and Chinese philosophy to the gang, who absorb them along with their other, less savoury, experiences. 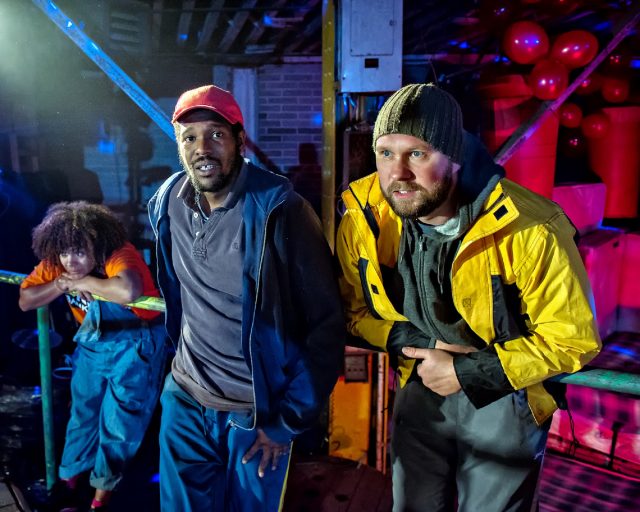 Adam Foster plays Urban, the 12 year old who introduced Hare to the underworld of the Shed Crew.

The real Urban, whose name was Lee, died before rehearsals started. It could have brought an end to the project, but instead writer Kevin Fegan chose to rewrite the beginning and end of the show incorporating conversations between the Chop of 2017 and the Urban of the nineties. It’s a device that works very effectively and gives an ethereal dimension to the experience.

“I wanted to acknowledge the reality of [the Crew’s] lives, and Lee’s death, and not pretend that all was well with the world” Fagan writes in the programme notes.

“The truth is that some of the Shed Crew have gone on to lead equally tragic lives, and others have achieved great successes.

“It’s the warts and all honesty that I most admire, and the humanity that you warm to – Bernard Hare tells the good and the bad in his book because that’s the truth; he includes himself in that. It’s not about how we can go marching in and help – it’s what we can take from these kids and their experiences. There’s a lot in The Shed Crew for the rest of us to learn.”

If there’s a problem with this show, it’s that by necessity the Shed Crew actors are much older than the characters they portray. Chop telling a ‘bedtime story’ based on Arthur and Excalibur to a bunch of hardened twentysomethings doesn’t seem credible, and it’s tough to comprehend that the real crew were so much, much younger. A young teen facing pregnancy and childbirth entirely alone is shocking; that shock is muted when the actor is more mature.

None of this really detracts from the audience experience, however. The visceral energy and authentic language of the Crew, together with the unique staging, creates an unforgettable ninety minutes of theatre. 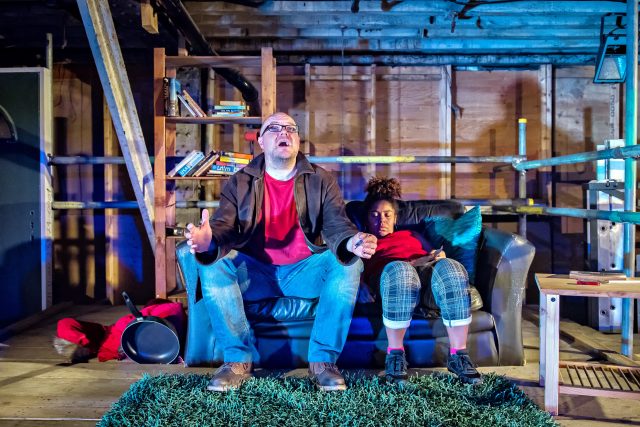 Rod Dixon believes the story fits in well with the ethos of Red Ladder, where he’s also Artistic Director.

“As one of Britain’s leading radical theatre companies this story is one that Red Ladder still needs to tell – vast sections of society across Britain exist in extreme poverty; forgotten communities living parallel lives in austerity against the glossy veneer of commerce and consumerism.  We’re thrilled to have the Albion Electrics warehouse as a venue in which we will immerse people into this world; one from which we can all learn about ‘survival’ and family and the power of humanity and the arts.”

Twenty years on from the events of the book, Red Ladder is working with Leeds Poverty Truth Commission and partnering Simon on the Streets to work with communities and start a conversation about extreme poverty. An artistic outreach programme is taking place and Red Ladder is making The Shed Crew as accessible as possible, tailoring some performance times around the specific needs of community groups.

Performances run all this week. The 8pm shows are mainly sold out, but tickets are still available for Thursday (28th – 1230) and Saturday (30th-1400) matinees

Bookings are made through West Yorkshire Playhouse.