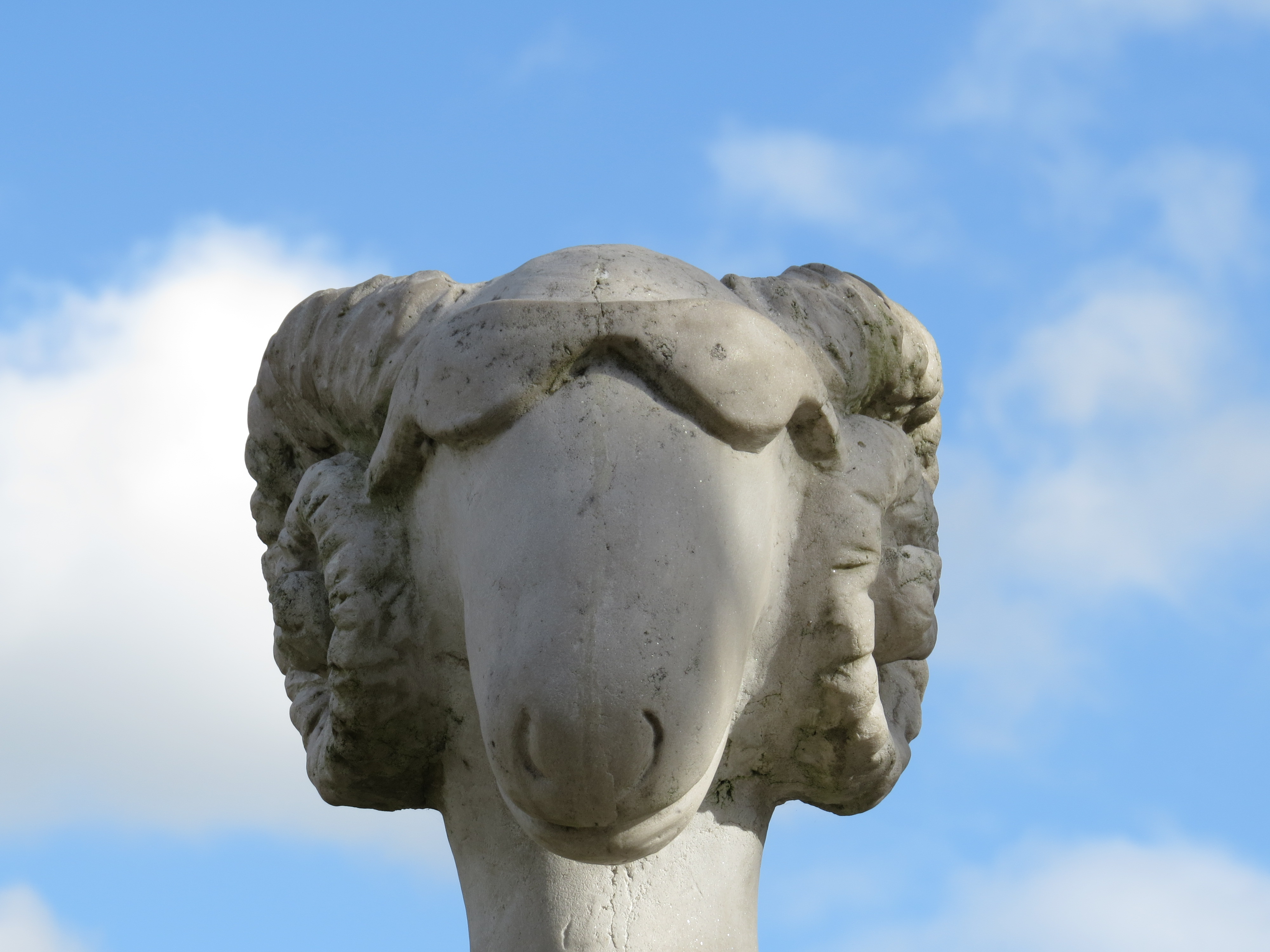 Walter Grumpius sets forth again, ricochetting around ‘our’ public sculptuary like a slow and curmudgeonly pinball: Episode 2 of a continuing series …

I daresay that at some stage I shall have to defer to Guy Debord and Michel de Certeau but for the time being I am keen to navigate towards my own definition of psychogeography or, at least, to begin compiling a list of characteristics that might inform such a definition.

To take the ‘psycho’ part of the construction first, the Freudian concept of free association suggests itself. How ‘free’ this will become during the course of my walk remains to be seen; my first association – seeing the Arndale Centre in Shipley and

Clearly established, however, is the underlying velocity of psychogeogging; this is Slow Travel. I am still at the starting point of the walk, not having essayed a single step towards my destination in Birstall and yet have already spent three mornings exploring the shopping centres of Armley, Crossgates and Headingley.

It’s clearly time to get going. So, I meander across Shipley Market Place, through an unnecessary car park, until my attention is arrested in the centre of the square, shortly before the market stalls, as I arrive at the Diana Princess of Wales Memorial Shrub and Crisp Packet Garden.

Perched amidst the shrubbery and unretrieved rubbish is a recently-commissioned public sculpture which manages to surpass the lame effusions of Andy Scott – Minerva on Briggate and the horse inside the Trinity Centre in Leeds – but not to the extent that would threaten Praxiteles or Donatello on the pantheon of greatness. This good-natured piece of tosh is called The Shipley Shopper, and is as ovine as it sounds. It represents a stonecast sheep relaxing cross-legged upon a mosaic settle beneath a tricksy metalwork umbrella, a bag of purchases in each forehoof – a vibrant shopper if ever there was. 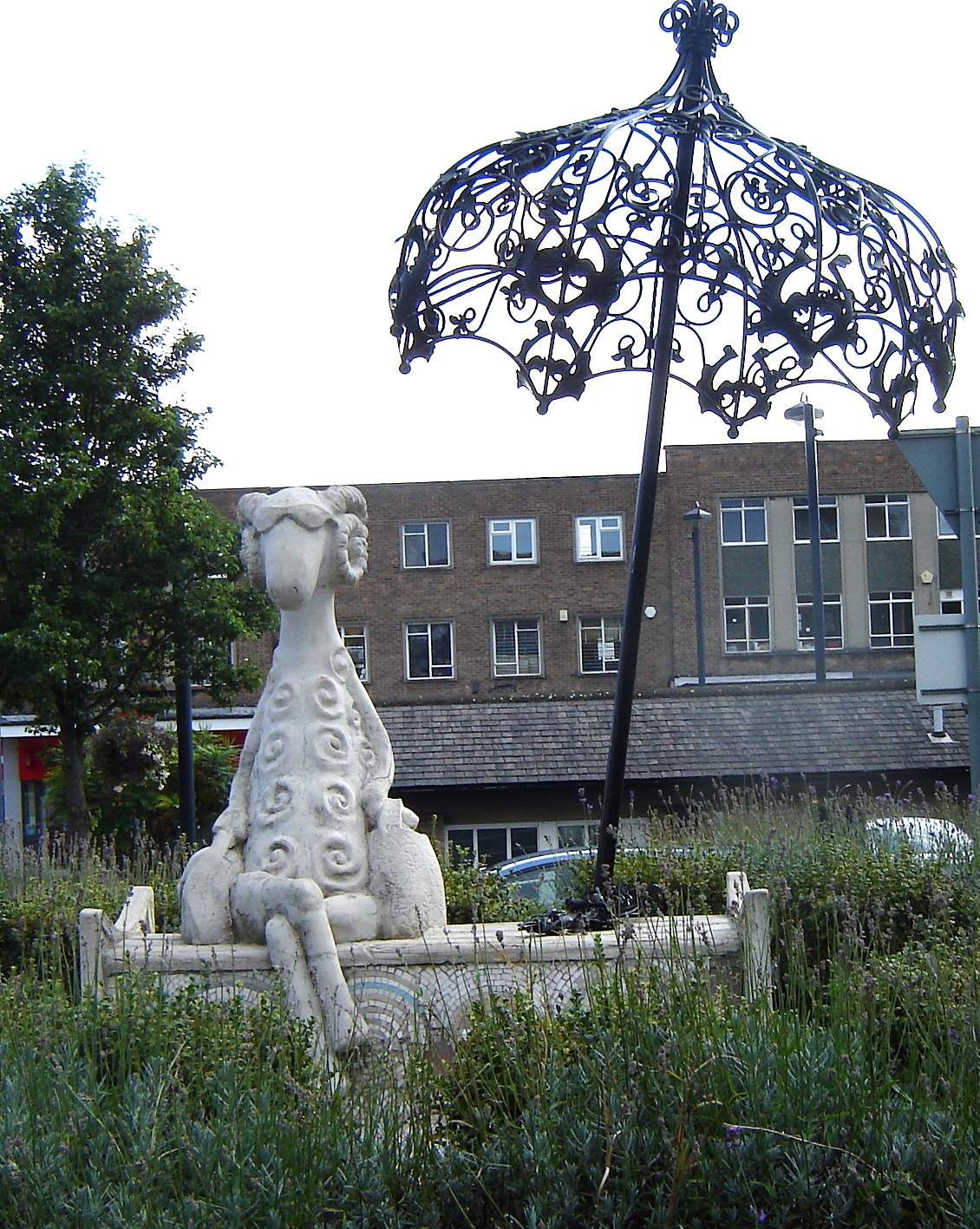 I was disturbed, as a responsible citizen, to learn from the accompanying plaque that the work was by The People of Shipley. Step forward the bashful artist Morwenna Catt, either being generous in her attribution or eager to share the blame. In fact the concept, if not the execution, was collaborative with ‘The People of Shipley’. Shipley’s name derives from the old English, ‘scip’ meaning sheep. More subtle – just – than Scott’s Minerva but isn’t it time there was some sort of quality control on these things?

Which leads inevitably to reflections on the subject of public art – or public sculpture in particular, as it is probably best to leave graffiti and murals out of the discussion for the time being. The phrase public sculpture begs two questions: what exactly is public about it and what constitutes sculpture?
Is it public in the sense of:

(a) being in the open air – a city square, say, as opposed to behind the walls of an art gallery or in the foyer of a business or atrium of a skyscraper – though is such a public space not equally as curated as a gallery?
(b) being – albeit tenuously – commissioned and conceived, if not executed, by the public?
(c) being genuinely uncurated (a sort of 3D graffito)?
(d) interactive (the analogy might be cairns on mountainsides and tops to which walkers add their contribution)?
(e) not public at all (the analogy here might be public schools)?

I suspect (a) and (e) are really the same question. Perhaps the whole matter hinges on notions of curatorship and permission. The suspicion is that ‘public’ is used in a fairly constricted top-down ‘for you, but not by you’ sense. I also have a feeling that ‘public’ in this context is often used as a euphemism for second-rate or half-hearted.

As for ‘sculpture’, I can’t pretend to offer a definition but I have a gnawing intuition of a distinction between sculpture on the one hand and statuary and street decoration on the other – between, if you will, something that continues to arrest and stimulate you and something that is merely and annoyingly in your sight and in your way. Let’s consider some local examples – a by no means exhaustive catalogue, but one intended to encourage debate and disagreement.

Starting in Leeds City Square, we have a curate’s egg of a collection. On the one hand there are Alfred Drury’s gorgeous nymphs from 1903, beautiful beyond any lyricizing, four pairs of graceful creatures representing respectively morning and evening to indicate their purpose as light bearers. This function has been rendered redundant by the present’s more powerful street lighting, and the last time I checked only two of the nymph’s lamps were still working. Nonetheless as you emerge from the northern concourse of Leeds Railway Station there could scarcely be a more radiant welcome to the city. 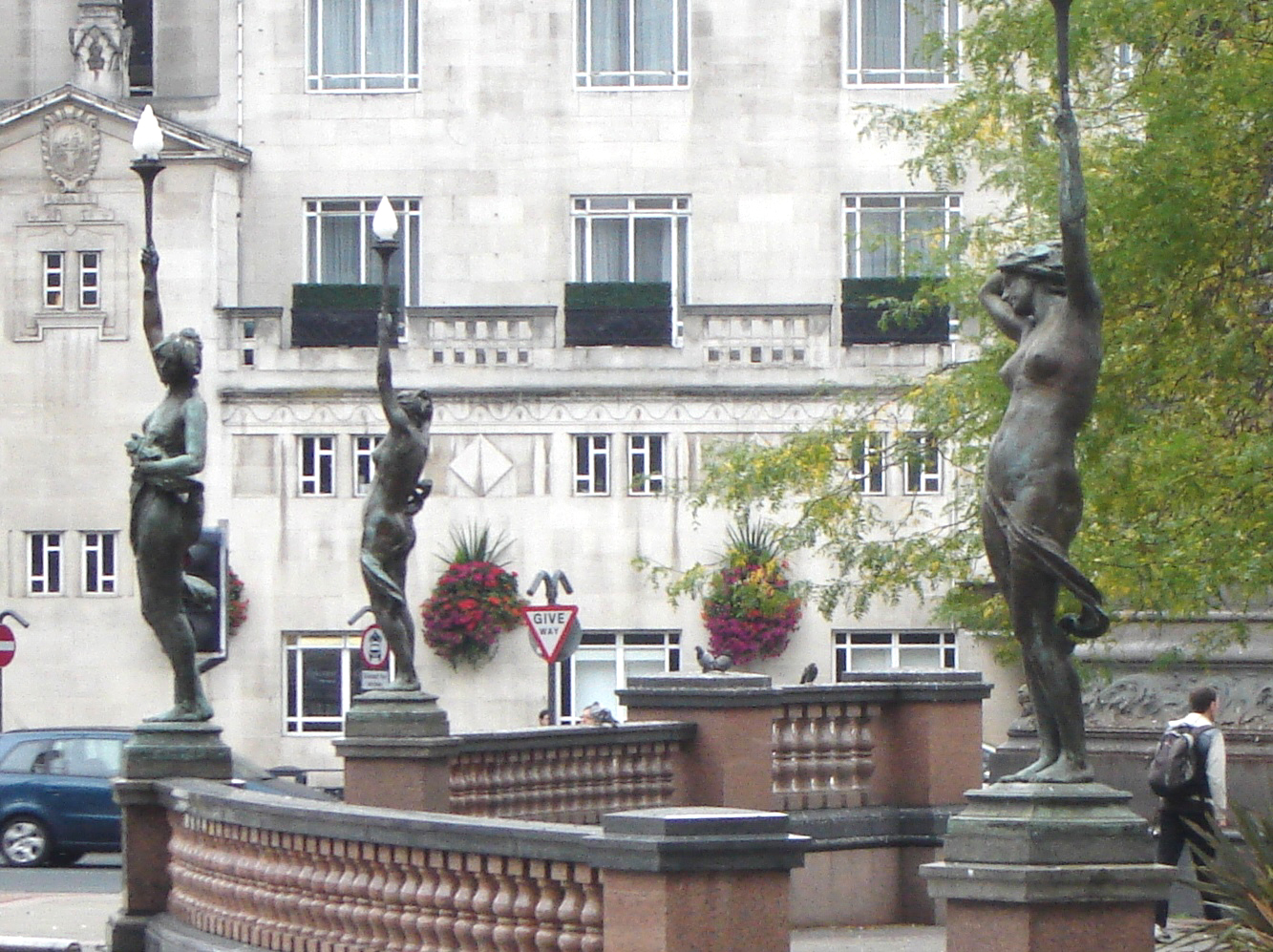 Compare and contrast the nymphs with Thomas Brock’s wretchedly leaden and pompous Black Prince – also 1903 – which blights one whole quarter of the square. Apart from its sheer vulgarity one is also troubled by its – and here I am struggling for the spatial equivalent of anachronistic – ‘anatopographical’ (new rule of the game: psychogeographers are allowed to coin words) presence in Leeds. The Prince’s connections, if any, with the city have never been established. Furthermore he was a thoroughly unpleasant piece of work, a cruel and bloodthirsty butcher – admittedly not unprecedented in the 14th century. When, in the 15th century, the discerning folk of Venice had a similar equestrian statue of a foreign mercenary, Colleoni – by the sculptor Andrea del Verrochio – imposed upon them, they insisted it be removed from St Mark’s Piazza to the most distant and obscure quarter of the city. May I humbly instigate a similar campaign to remove the Black Prince, preferably to landfill for some new car park. 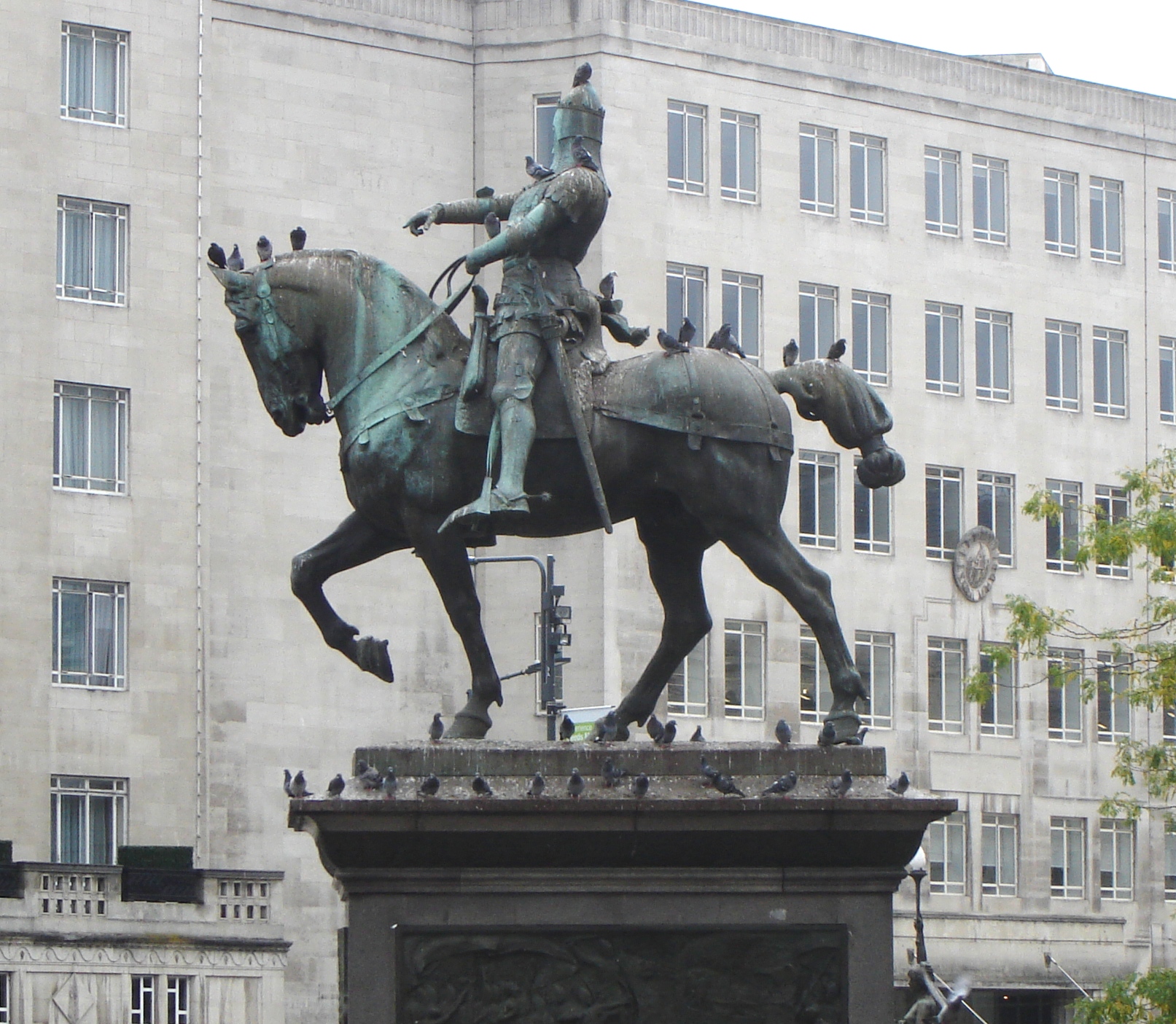 Also to landfill should go the various bits of junk in Millennium Square, even if they are the work of renowned sculptors. This is where my comment – above – about public sculpture often being second-rate is derived. Kenneth Armitage was, and Richard Wilson is, a far better artist than the limp example of each’s work in the Square evidences.

Of the two the stronger piece is Wilson’s Off Kilter (2001) – a nod perhaps to the Leeds Rhinos. Wilson’s interest to this observer lies in his making extraordinary interventions into ordinary contexts, offering strikingly visual counterpoints to banal buildings for example. His work is normally on an heroic scale. The piece in Millennium Square doesn’t hit home however and I’ve struggled to put my finger on quite why. I think it’s partly to do with the fact that the surrounding buildings – the Wetherspoon’s pub apart – are outstanding pieces of architecture. Since the opening up of the square, Cuthbert Brodrick’s designs in particular have been given room to breathe and show what splendid works they are. Consequently, Wilson’s contrapuntal aesthetic doesn’t work so effectively here. To an extent it’s a matter of perspective – hence, maybe, the title of the work. Viewed from the bottom of the Museum steps against the backdrop of the pub, Off Kilter is mildly compelling but from most other angles is unremarkable. 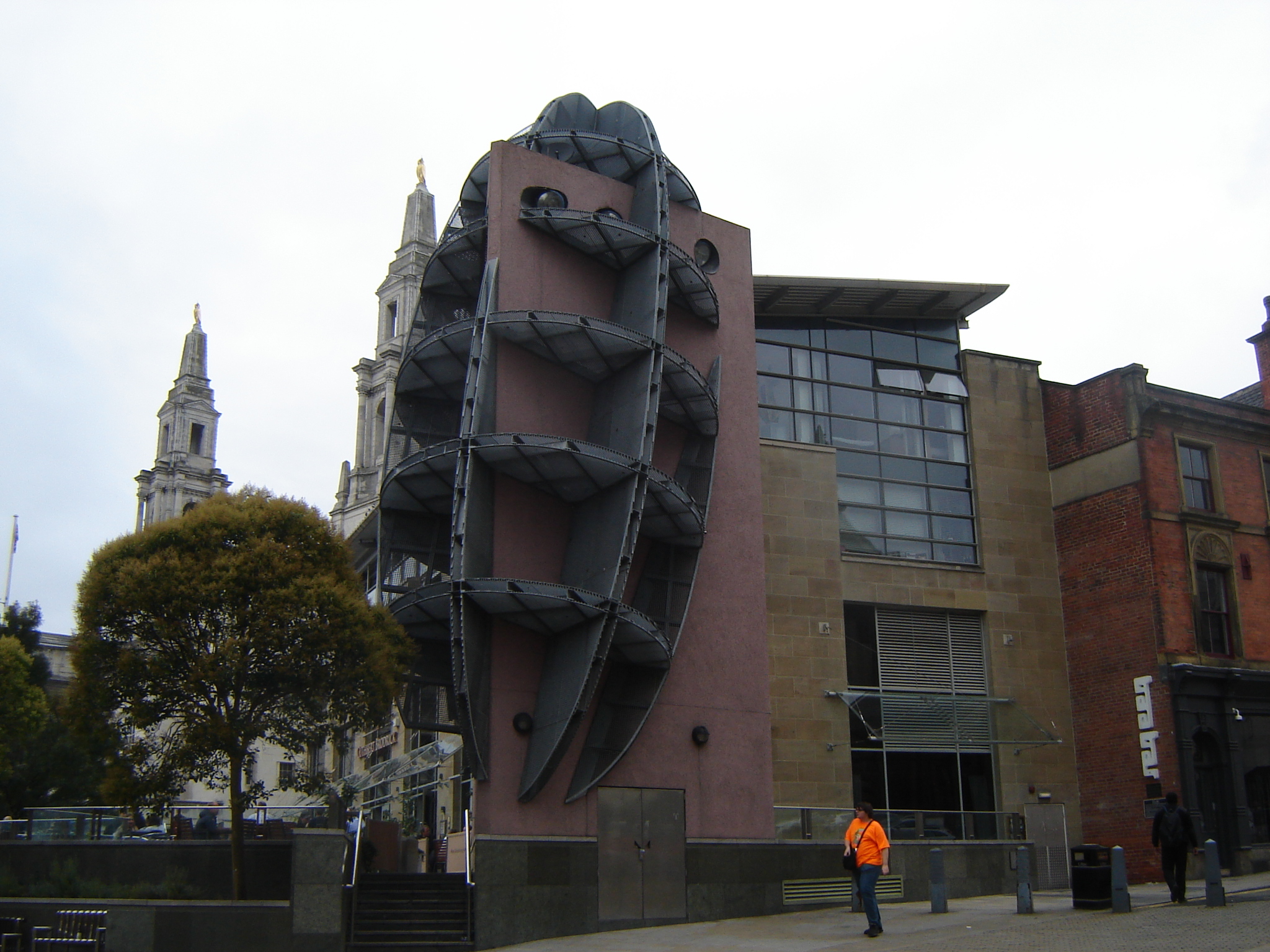 Armitage’s Both Arms (2000), although containing more tension, movement and energy in a single finger joint than is evinced in the whole body of Andy Scott’s
dirge to rigor mortis on Briggate, is a disappointing work. If a piece can be both too literal and too symbolic, then this is it but, above all, it is too sentimental, too obedient to the unmodulated message of goodness in the Mandela Garden. As Robert Graves and Robert Smithson amongst others have said, art should be grit in the machine rather than oil. 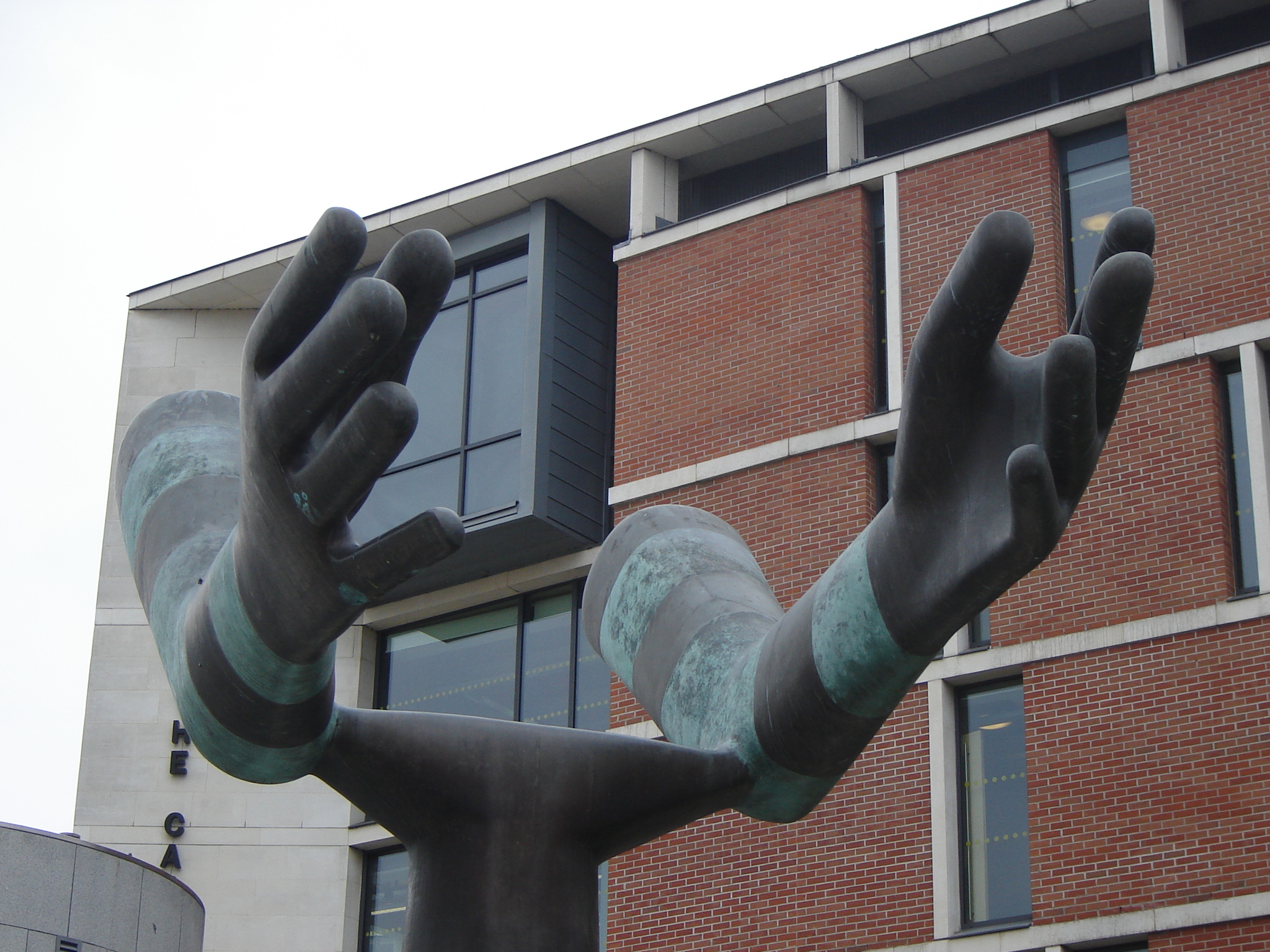 Some weeks ago I rushed to the Jubilee Wing of the LGI to indulge in a Festival of Adoration for my new nine-hour old niece – my first joyous venture into the realms of uncledom – all the pleasures but none of the burdens of babies. Such was the anticipation that I scarcely remarked the sculptures in the court outside the hospital, but if I noticed them at all, it was to dismiss them under the general heading of toys and kitsch. However, they persisted at the back of my mind and a few days later I returned to have a proper look.

The works are by Tom Lomax, commissioned by Tess Jaray, and are known collectively as Guardian Angels (c1999), appropriate perhaps for their position at the entrance to the hospital. The first piece encountered on turning out of Calverley Street looks like a huge centipede. It is intriguing therefore to learn that it is in fact a representation of the Archangel Gabriel with 140 pairs of wings.

Previous sightings of this heavenly messenger – almost entirely in Renaissance paintings and sculptures – show Gaby annunciating to the handmaid of the Lord her imminent parthenogenetic pregnancy. In such works the angel is resolutely anthropomorphic – haughty in Van Eyck, humble in Fra Angelico, overbearing in Tintoretto, but always human apart from the invariable pair of clumsy wings. To encounter Gabriel as an undulating slug with a host of titchy wings and without his annunciation partner is certainly a radical departure from traditional religious iconography. I rather like it. 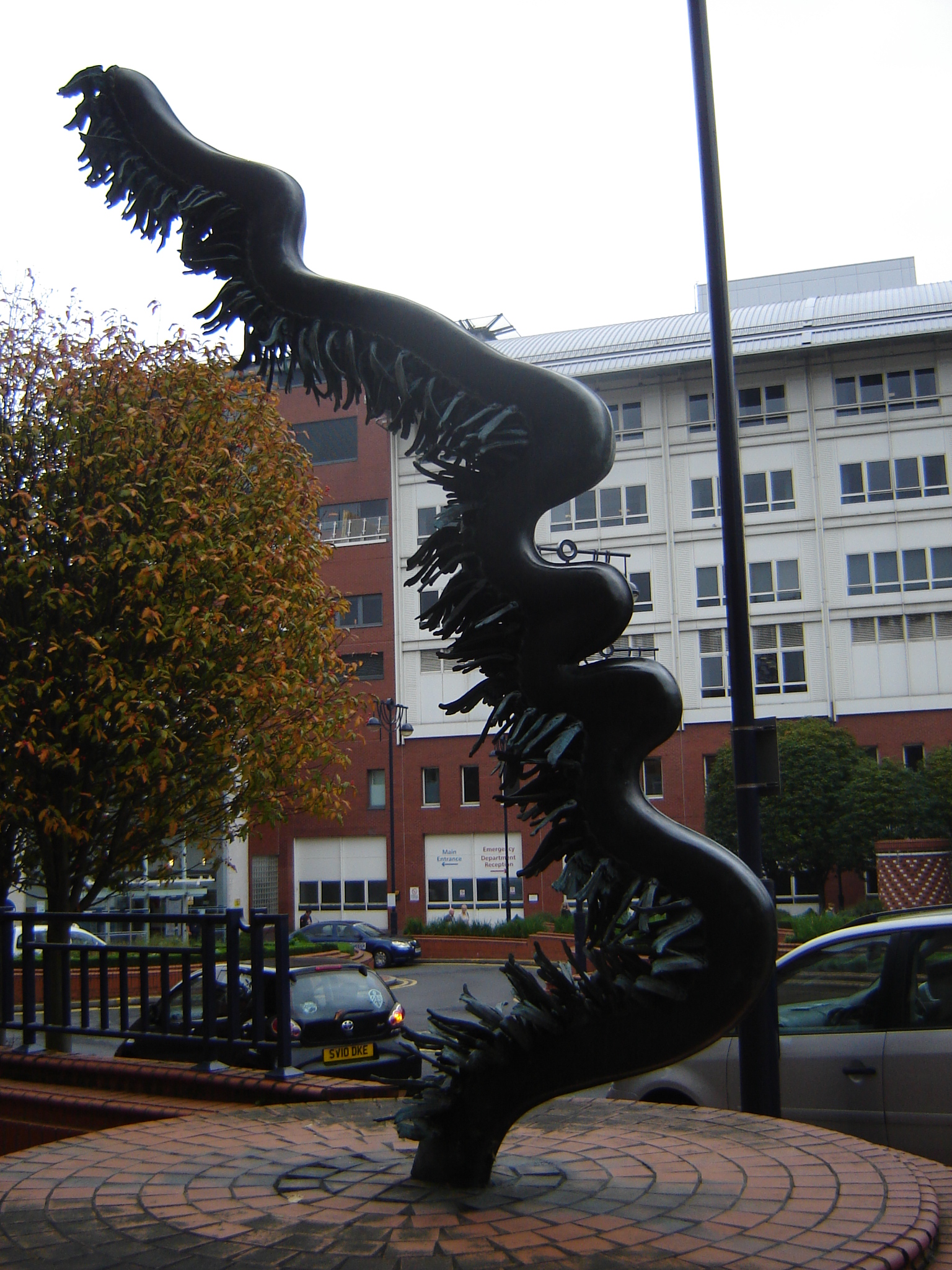 The other pieces also represent archangels – Michael, Raphael, Uriel. It is interesting to compare the hands in these pieces with Armitage’s in Millennium Square. There seems to be a lot more dynamism, expression, language in these than in the rather hackneyed pair in Mandela Garden.

Perhaps in conclusion reference should be made to the one that got away, Antony Gormley’s Brick Man. The City Council rejected the idea for this 100ft high sculpture. The artist claimed that the Council lost its nerve but perhaps they were already envisaging Bridgewater Place as their ode to gigantism. Looking at Gormley’s maquette of the piece in the City Art Gallery it is hard not to conclude that the right decision was made, even if for the wrong reasons. His Angel of the North is a horrid piece of bombast. It is also theologically illiterate. Angels do not appear alone; they officiate at annunciations, visitations, adorations, conversations, crucifixions, dormitions, assumptions, coronations, last judgements and so on, but they are not loners. And angels anyway? In the 21st century? They’ve even landed outside the LGI. 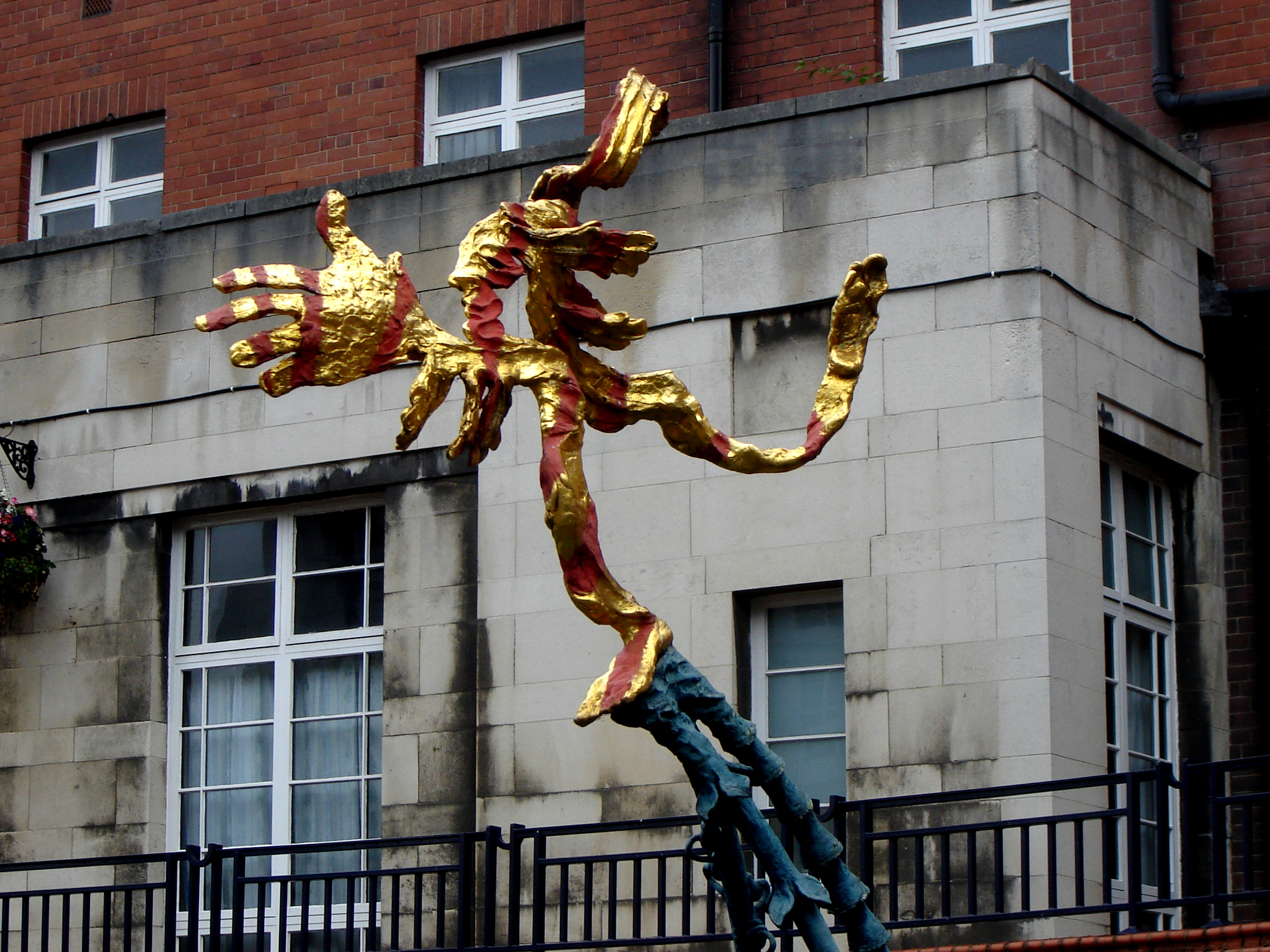