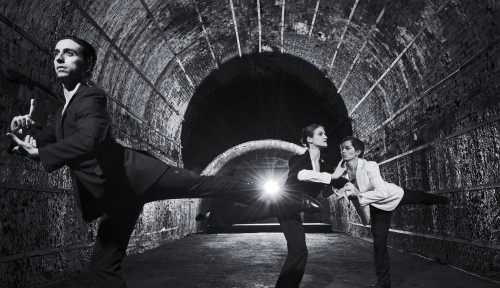 The sound of breathing; in and out…in and out…and in a spotlight stands the Muse. Her hair scraped back into an austere bun, her face expressionless, her scarlet lips and a flash of red at her bosom the only relief from the blackness of her costume. Then, with the precise, angular movements of the bharatanatayam, she comes alive, commanding the space, demanding our attention. Soon she is joined onstage by the Man, an executive, and the Artist, a romantic. What follows is an intricate, intimate investigation of the contradictions and conflicts between light and dark, west and east, and the self and the other.

Inspired by the 150th anniversary of the birth of poet, musician, and social reformer Rabindranath Tagore, choreographer Ash Mukerjee and his trio of exceptional dancers have created a truly multi-cultural piece of dance performance. Mixing contemporary, neo-classical ballet, and classical south Asian dance vocabulary, the piece explores the duality of life: the everyday concerns of family and business on the one hand, and the creative urge on the other. Set to a beautiful and haunting musical score, the Muse must bring balance to the relationship between the two polarities.

In her role as The Muse, Kamala Devam, is extraordinary; her sinuous, sensuous movement is enchanting, right to the end of her very expressive fingers. Whether using the flexed feet stamping of the bharatanayam, or the balletic style, her performance is so committed as to make it almost impossible to tear one’s eyes away. Kim Amundsen’s Artist, in flowing white shirt every inch the Romantic, is lithe, supple and has incredible elevation. He communicates the restlessness and desire to ascend (transcend?) of every creative person. In opposition to this stands the Man; grounded, strong, athletic – a realist. Gian Luca Loddo brings his acrobatic physical theatre background to the role. With his black frock coat billowing behind him as he flies and falls across the stage, the Man attempts to quell the artistic impulse in a series of solo, duet and trio sequences that weave together, sometimes in unison, at others discordant until the conclusion.

Like the dance itself, the musical score is a blend of influences. Composed, arranged and played by Arun Ghosh, the human voice, clarinet and traditional Asian instrumentation are mixed with occasional urban beats. Ranging from modern and traditional classical forms to a jazzy solo clarinet section, the music successfully underpins the narrative of the piece but stands alone as a fine composition in its own right. The score builds to a climax with the Muse finally bringing the two opposite forces together in a metaphorical and literal balance. The tension on the faces of the Man and the Artist, mirrored in the taut, stretched sinews of their arms, is slowly released by the fluid movements of the Muse. The three then sway gently to the sound of breathing…in and out…in and out…and in her spotlight, the Muse stands, a sphinx smile playing across the alabaster of her face.

‘Song of the City’ is a collaboration between South Asian Arts organisations, Kala Sangam from Bradford, and Akademi South Asian Dance UK who are based in London. It was the first performance to take place in Kala Sangam’s Blue Hall – a newly refurbished performance space in the company’s headquarters in St Peter’s House. The 112 seat venue will host classes, workshops, and performances, and continues Kala Sangam’s development plans to become a North of England centre of excellence for South Asian arts. More details about the company can be found at www.kalasangam.org