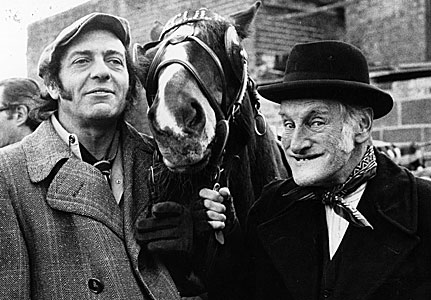 Not seen your review of Steptoe and Son yet, Philip. Slacking?

Not exactly, Harvinder … just not sure what I think.

Unlike you to be deficient when it comes to dispensing opinion. What’s the problem?

You said you enjoyed it. Can’t you just write that? You know, flower it up a bit with irrelevant verbiage and pointless digression like you always do. Just say “it was good” in seven hundred words. If you can manage to be that terse.

I can tell you’re not going to.

Well, I’ve read the reviews, they all say pretty much the same thing. Why would I want to repeat that?

You could always go for the controversial angle? Vigorously disagree with everyone. You don’t mind making a berk of yourself if you get a good post out of it.

Thing is, I agree with most of the reviews. Not the ones that drag in some pointless reference to Beckett, obviously.

Anyone who feels the need to refer to Waiting For Godot has issues. Insecurities.

Not the only ones with issues, Philip, ahem.

I don’t feel the need to mention Beckett in every review, mate. You can almost see them, heads slightly tipped, stroking their wispy little beards; “well, of course nobody played Pozzo like Donald Sinden, and in my opinion Sir Michael Horden was the finest Estragon of his generation … blah blah blah.”

What’s that got to do with Steptoe?

Bugger all. That’s my point. Leave it out.

So, besides the obligatory Beckett reference you agreed with the majority of the reviews? Nothing to add? Elaborate upon? You sure?

Pretty much. I found the accents a bit disconcerting at first, but not a problem. Albert was played with too much energy perhaps – he was positively sprightly, scampering up and down the ladder like an imp – but that was great to watch. The set was a triumph, the dancing lovely, the choice of music brilliant and the introduction of “the woman” intriguing. Everyone agreed.

What you moaning about then?

Seems to me you’re just being difficult. You know the format, write the damn thing.

Well, I have one quibble … with Lyn Gardner … she referred to the original TV series as “gentle comedy”.

What’s wrong with that? I’ve never seen it, too young.

There’s nothing gentle about Steptoe and Son. It’s nothing to do with age, it’s a classic you idiot … Did you know I was almost born during the third episode?

For a moment there I was afraid you were going to say “conceived”… carry on.

My mum was laughing so much my dad was worried he’d have to rush her to St Mary’s … Fortunately I managed to hold on for a couple of days, though my dad did cut short his visiting hour at the maternity wing so he could be home in time for the fourth episode. Dad was a bit of a fan.

Ha, second in the fatherly affections to a BBC sitcom. I bet your mother was chuffed.

Not really. She missed the episode. They didn’t have home recording equipment back in those days.

That doesn’t explain the “gentle TV comedy” quibble. Your parents liked it. Can’t have been that hard-hitting and gritty. I mean, parents?

But it was, Harvi. It so was. There was nothing quite like it on telly before. Albert and Harold were piss poor, scruffy, and treated each other like shit … they could almost have been part of the family.

Ah, so that’s why you’ve never introduced me to your folks.

Quite … you did once bump into Uncle Tommy though. He even looks like Harold Steptoe.

He was amusing. From a distance. Wouldn’t want him in the house.

He’s a bad-mannered, I’ll-tempered, foul-mouthed, obnoxious git with drink problem and a tenuous grasp of the concept of personal hygiene. Nobody wants him in their house. But that’s what made Steptoe and Son so good. We knew people like that. We were related to them.

Why? Telly’s just escapism? Why would anyone wantto watch that?

Because people like my parents saw themselves in those stories, felt their experience reflected in that pokey rag and bone yard. That was the way they spoke to each other. That’s what life was like.

Doesn’t sound very entertaining. Doesn’t even sound very likeable … I can’t see the point of a show about people I don’t really like.

Ah, Harvi I think you’ve just hit the nail on the hitty bit. That’s what people were saying after the performance I went to – the characters came across as more likeable. Sympathetic. Gentler. The song and dance routines made Steptoe and Son a hell of a lot cheerier. And the benign female presence softened the whole thing.

Great. That’s good, isn’t it? Characters that we feel warm towards … or at least would tolerate. Surely it’s an improvement, Philip?

When Galton and Simpson wrote the original they intentionally made it as naturalistic as possible; no musical interludes, no gags, no catch phrases. They stripped out all that music hall, light entertainment baggage and wrote pure theatre. Some of the best theatrical writing of the last century if you ask me. My parents would never have gone to the playhouse to see Pinter or Bond or – for heavens sake, Beckett – but they wouldn’t have missed Steptoe on the telly. I’m not sure putting the entertainment back in improved things. Not for me at least.

But you’re a bleak bastard … what’s wrong with a bit of a laugh? And it was the same words wasn’t it? Original scripts. Galton and Simpson wi’ nowt taken out

Hmm, yes … but remember when The Scissor Sisters brought out a cover of “Comfortably numb”?

Not really, Philip. You forget, I only like Asian music.

Just trying to broaden your musical horizons, Harvi. Anyway, sometimes cover versions are a bit weird. Same words, yes. But they lose a lot of the original magic, and they add things that ought not to be there. Imagine a trombone solo in the middle of Anarchy In The UK.

I once heard St Winifred’s Girls School Choir do a Sex Pistols cover. Bloody marvelous too.

I’m trying to be sensible here. And I’m not saying cover versions are wrong. But the better the original, the harder it is to get it right. And Steptoe was pretty damned perfect as it was. You wouldn’t add a synthesizer solo to an early Bob Dylan tune, would you?

I thought you just did Punjabi tunes?

That’s a little random, even for you Harvi.

Good idea. I’m getting nowhere with this review. Let’s have a drink, always write better after a bottle of red. You buying?

Shares it is. After you …