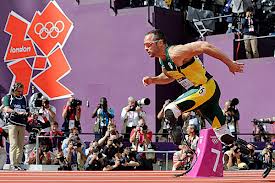 Guest blogger @peskychloe offers her interpretation of issues of equality surrounding the Paralympics – a parallel event or a separate one?

The opening ceremony for the Paralympics was last night. If you don’t know what this is, it’s a parallel sporting event to the Olympics, so it’s also being held in London.

Is it actually parallel? Social media sites have been full of ‘I’m looking forward to this more than the other’ comments, and Channel 4 itself has advertised with ‘thanks for the warm-up’ as their tag line. From this, you’d be forgiven for thinking they are actually two separate events instead of parallel ones.

Before you formulate your opinion on me even asking the question, let alone your opinion, I’d like to give you some background on myself, since this is my first post for The Culture Vulture and Leeds Inspired. My husband is quadriplegic after breaking his neck at school playing rugby – it’s a very rare thing to happen, even playing rugby, and means he’s totally paralysed from the neck down. He still loves watching sport, and even surprised himself by watching just about every sport at least once during The Olympics.

We were talking about Pistorius and he said he thought it was unfair that he should be allowed to compete at both. I asked him why, and he said, “he’s either disabled, or he isn’t. It’s patronising.”

Whats your reaction to this, seriously – did you assume a disabled person would be pleased to see another disabled person competing in both events? After all, isn’t this inclusivity at its best? Someone without legs, running against people with legs, in the ‘normal’ Olympics with everyone else.

Well, to be honest, no. It wouldn’t be ok the other way round –  If Usain Bolt decided to run the 100 metres against people with false limbs, would we welcome this as inclusivity, or would we think it was grossly unfair?

To me, if something isn’t fair in both directions, it’s not fair at all.

I’ve had a few discussions on Twitter about reverse sexism in the Olympics – I joined in and got annoyed at Jessica Ennis being considered fat, quite rightly – but I also got annoyed at constant photographs of Tom Daley’s chest being captioned with ‘phwoar’ coming up in my news feed. We congratulated the Olympics for finally allowing women to compete in every sport – but there were still two sports that men could not compete in. None of this seems equal.

Should I be surprised then that the Olympics are allowing something I consider inequality? More to the point, why am I even discussing this opinion? Because I know not everyone will agree. Even I don’t totally agree with myself.

Integration into society for disabled people to me, as a wife of a disabled person, needs to start in the real world before we even attempt it with sport. Once I’m not asked prying questions by every new friend, then I’ll know society is starting to become equal.

Like many disabled people, Ian doesn’t want special treatment, just treatment which isn’t patronising or disrespectful – not everyone assuming he drinks through a straw, or talking to me instead of him would be a start. We’d both like to go on holiday without worrying we won’t be able to get into the hotel room.

I’d personally like less questions directed at me about how we have sex. Ian never gets asked – it would be considered ‘rude’ – and yet I’m happy to answer, even though it’s clearly totally inappropriate.

I don’t understand sport – I once said it was a shame that teams didn’t allow the losing team to score a goal once they were more than four goals in the lead, you know, just so they didn’t feel bad. For me it seems to be about winning, so allowing disabled athletes into the Olympics might open the floodgates to non-disabled athletes competing in the Paralympics, because they will have more chance of winning.

Now, am I being patronising? I’m definitely misunderstanding athletes wanting to compete against the best in their chosen field and win, rather than just win. If they just wanted to win at any cost, they have the option of being a drug cheat.

Recently ‘cheating’ in the Paralympics has come more to the fore. I’m well aware of the effects of autonomic dysreflexia, mainly as it’s the reason I have to carry around blood pressure medication when I’m with Ian. Basically, even if you cannot feel pain, your body will still create adrenaline – it can be fatal for people like Ian, as it effects your blood pressure.

Some disabled athletes have been hurting themselves on purpose in order to create extra adrenaline – breaking their own toes, blocking catheters and so on – just before an event to give themselves an adrenaline surge. It’s frowned upon, but hard to prove through testing, so the knowledge of this activity being as well known as performance enhancing drugs is important.

Disabled athletes often get extra props, just because they’re disabled. Ian is a painter, and this happens to him all the time. “You’re so talented, and the fact you do it with your mouth is even more amazing,” is a lovely thing to say, it really is, but the clarification of it being even more amazing isn’t as much of a compliment as you might think.

Like him, the Paralympians are just doing what they want to do – they want to win as much as non-disabled athletes do, and some of them will still cheat to do so. I’m pretty sure they don’t want their event to be seen as ‘the real event’ out of the two, or want extra congratulation for winning an event ‘despite being disabled’.

What do you think – Am I being too black and white?