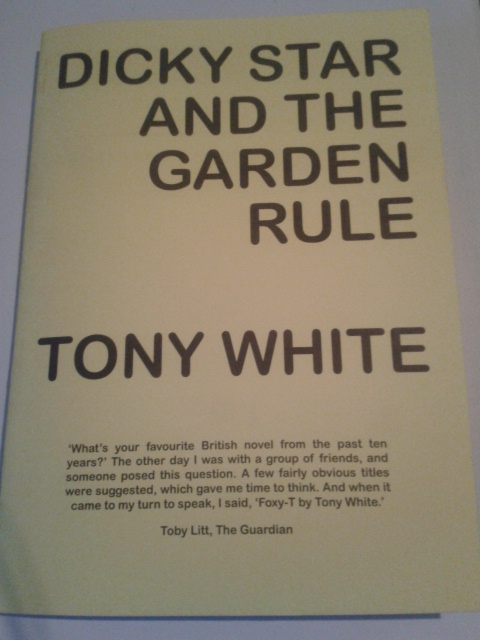 I was sent a book last week. Well, not a book exactly, it’s fifty pages long, more pamphlet sized. Feels like a pamphlet too. Twenty-five stiff pages folded double so not quite laying flat, stapled in the centre, its bright yellow cover with stark black text only slightly thicker quality. Anyway, it is a story. It’s fiction. “Dicky Star and the Garden Rule” by Tony White (Guy who wrote Foxy-T, great book and if anyone wants to borrow it there’s a copy in the managers office at Temple Works, far left corner, bottom shelf). I’m looking for a reviewer.

I’d review it myself only it’s a bit too close to home. It’s set in Leeds in the mid-80’s and involves characters that feel very familiar and events that I know far too well. It begins with a scene that will trigger a precise muscle memory in anyone of a certain age with liberal-lefty political leanings:

Laura snatched the paper out of Jeremy’s hands. It had been folded inside out – the back cover brought around to meet the front in order to expose the inside back page, home of the classifieds, of cartoons by Gary Trudeau and Steve bell, and of the two daily crosswords – then folded in half again.

Yes, precisely! that was how we started the day back in 1986, with the Guardian Quick Crossword. Well, everyone I knew in Leeds 6 did.

The story is set the week or so after the Chernobyl disaster, in and around the Hyde Park/University area. One of the characters (Jeremy) is on the dole and gets a Giro every fortnight. His girlfriend (Laura) is a student and has annoying friends in CND. They both read Leeds Other Paper, hate Mrs Thatcher, and are worried sick about the radiation cloud. Jeremy does too many drugs, is a tormented arty type, reads too much Michael Moorcock and so is going a bit potty, and Laura is trying to get around to sensibly dumping him.

The story manages to convey the general paranoia about Chernobyl perfectly. I remember being called late one night by a friend a few days after the news that the cloud was heading for the UK; he was a food scientist at the University and was recommending nobody drank milk for a while, especially children, we should all be stockpiling the Marvel. And there’s plenty of details that only someone who knew the area intimately at the time would know. One scene in particular freaked me out a bit, concerning a disabled guy and some dodgy behaviour in the gents of the Hyde Park pub … all I’m going to say is I know for a fact that scene is based on a real incident (or more likely, incidents.) I happened to be drinking in the Hyde Park the very week of Chernobyl with a chemical engineering student called Katy – trying to avoid her ex who was camped out in The Chemic – and the very same thing happened to us. Or me, specifically. It did not bode well for that relationship either.

So, as I said, I’m looking for a reviewer. One thing I’ve not mentioned is that the story incorporates all the answers from the Guardian Quick Crossword for each of the days it’s set. This might seem a bit random and could be intrusive but I think the trick is pulled off effectively. You would not guess there were all those wires and pulleys behind the seamless illusion of a realistic narrative. Having footnotes that reveal the clues and answers adds to the reading pleasure, I think; it’s a bit like watching Penn and Teller show you how it’s done and still being fascinated by the magic trick. And, of course, this is fiction, from the Latin meaning “to shape, fashion, form or mold,” so how the heck he puts it all together is Tony’s business.

Any takers? I can post anywhere in the North or deliver to any coffee shop/pub in central Leeds.