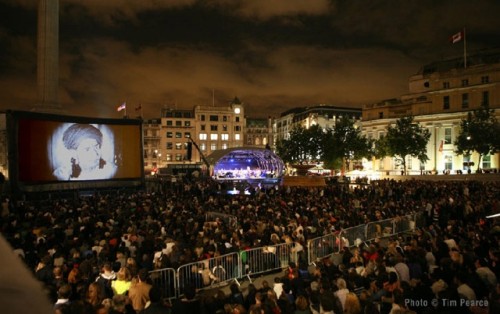 Earlier this year, Bradfordians experienced a moment of mass-pride, or at least this was my reading of events as they unfolded at the magnificent launch event for Bradford’s new City Park. That one event muted the cynics and naysayers as the event – and therefore by extension the big splashy city centre attraction it was launching – was universally celebrated. Still the naysayers wait to pounce, but the space remains well maintained and constantly populated by the most diverse cross-section of society, with  families, rude-boys, skate boarders, moshers, office workers and everyone in between making the most of the social space.

So getting to the thrust of my point here, this wonderful city centre space is this weekend, –Saturday 27th October at 6.30pm – going to be improved beyond my wildest dreams. There are few things I love more than this wonderful city, one of which is film, so in my opinion this City Park couldn’t be improved much more than sticking a giant, 50 foot  inflatable cinema screen in it, which is precisely what Bradford City of Film and Bradford Council’s events team have orchestrated by acquiring the services of big screen specialists the Cambridge Film Trust, for a FREE evening for all the family to enjoy. David Wilson, Director of Bradford City of Film says; “This is a great opportunity for the people of Bradford to celebrate film on a large scale in City Park.” 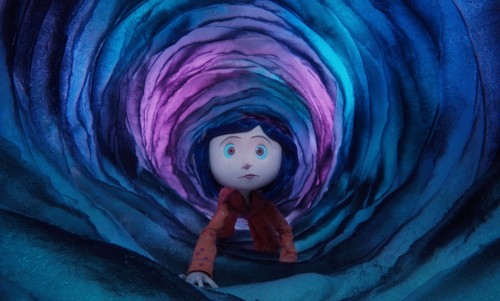 As if this couldn’t be even further improved, the film being screened happens to be one of my all time favourites, the sublimely animated adaptation of Neil Gaiman’s magical children’s novel Coraline. The film features the young girl Coraline, unsatisfied with her generic existence, she finds a door in her house that leads to a parallel version of her life, only that everything and everyone is exactly the way she would like them. One pretty major difference though is that everyone has buttons for eyes – and yes this is as creepy as it sounds – and if she wants to stay there she must too replace her eyes with buttons.

The event is fittingly supported by the National Media Museum ahead of their wonderful Bradford Animation Festival (BAF). So along with the main feature, there will be a number of short animations that are due to play at the festival in November. Some of the greatest shorts I’ve seen have been at BAF, so their selection is sure to entertain and delight.

Further, the selection of Coraline reveals a further layer of strategy as LAIKA, the animation studio behind both Coraline and this year’s wonderful zombie-filled kids’ feature film Paranorman, will have a presence at this year’s BAF. Mark Shapiro from LAIKA, says: “We are thrilled to bring Coraline to Bradford. I know everyone will enjoy the presentation of the film in this very unique, very creative venue. The setting alone brings chills… and just wait until the movie starts!”

The only down side to all this is that I’m going to miss the whole thing. Don’t worry about me though, I’ll be having plenty of fun on a family trip to Disneyland with my wife and five year old son, but it is one of those reminders that you really can’t have everything, and I am still incredibly jealous of everyone that is fortunate enough to make the most of this amazing FREE event.

Mike McKenny is former director of the film society Minicine, and is currently restoring The Plaza Cinema in Bradford. He can be found on Twitter @DestroyApathy and you can follow The Plaza @ThePlaza_BD7 on Twitter or ‘like’ the Facebook page at facebook.com/ThePlazaCinema.