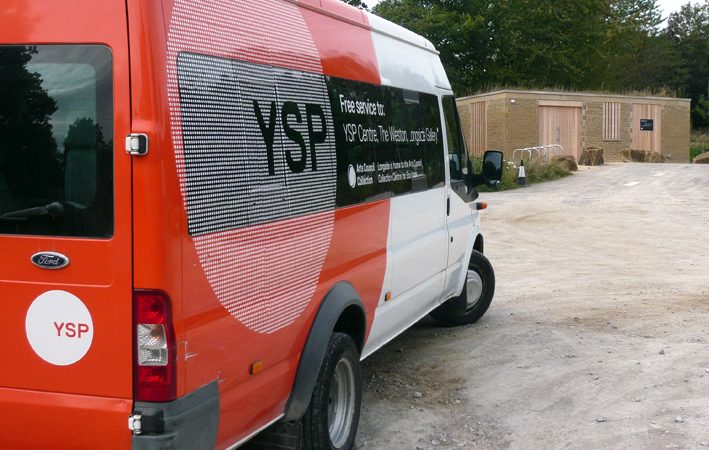 On a visit to YSP IVOR TYMCHAK ponders what links a sculpture park to a car park.

Despite my regular visits to the Yorkshire Sculpture Park over the years I’ve never used the free minibus service so I decide on a whim to go on it.

The minibus pulls up right on time. The livery on the panel van complies with the official branding. It wraps around the entire vehicle and proudly states: Free Service to: YSP Centre, The Weston, Longside Gallery.

Using a circular route, the minibus visits all three of the park’s main attractions. To visit the galleries on foot is a total distance of two or three miles so the minibus is invaluable for less able people.

The driver – a middle-aged, energetic, bald headed man – jumps out of the bus dressed in his smart blue shirt complete with an embroidered logo of the park and addresses the group: ‘Where are you all parked?’ he asks.

I can’t see how this question is relevant to our desire to board the bus but one of the two women in front of me answers with a vague wave of her hand to her left, ‘we’re just over there.’ The driver smiles, nods and looks directly at me.

‘I’ve cycled here,’ I say. This throws him somewhat and a crease appears in his brow. After a moment he says, ‘I suppose that’s all right.’

The driver then explains to us, ‘we’re a charity organization so it’s only fair that those who support the charity by using the official car park get use of the facilities. If you’d parked over the road you wouldn’t be allowed to board the bus.’ He then opens the sliding door of the van, produces a set of steps from within and places them below the entrance. We all clamber on board.

As he pulls out into the main road with a right turn I notice directly opposite a field of parked cars. Several metres down the road the minibus drives past a car park entrance with a big sandwich board that states: £3 ALL DAY.

This is a surprise.

To park all day in the ‘official’ car park costs £12 and the cheapest option is to park for one hour at a cost of £3.50, so the car park over the road is a real bargain in comparison.

As the minibus drives past I can see a short, plump man in a hi-viz jacket and wearing a flat cap. Over his shoulder is slung a leather bag that he uses to collect money from the cars entering the field.

We reach the Longside Gallery and I am the only passenger to get out. The driver places the steps for me to exit and I ask him, ‘what’s going on with that car park over the road?’

The driver puts his shoulders back as if squaring up to fight me. ‘That man is fleecing us. No sooner had we built the new gallery than he opened his field for parking. He’s undercutting us by such a huge margin he’s taking money from us. And we’re a charity.’

I say, ‘Right, but isn’t that just…you know, competition?’

‘What d’ya mean? We’re a charity,’ he says again. ‘We rely on donations to stay open.’

‘Yes but how is this situation any different from say, charity shops opening on the High Street? The other shops in the High Street must think, “hang on, we’re paying full rates and they get subsidized rates or whatever and sell stuff that they’ve been given so they can undercut our prices drastically – we can’t compete with that”.’

My example makes him consider before he says, ‘Ah, I see you’re trying to play devil’s advocate. Except, that farmer didn’t get planning permission for that car park. He got planning permission to put up some poly tunnels and then he opened a car park instead. He cheated.’

The driver then spots a car pulling into the compound that’s clearly infringing some regulation or other so he strides off without another word to me to remonstrate with the driver.

I can tell the minibus driver is personally aggrieved by the competing car park – he must feel it’s threatening his livelihood.

After visiting the gallery I leave to walk across the valley to the main building. To my mind, this is the real attraction of the park and the best artworks on display are nature herself.

On the walk I can’t help noticing how manicured the park is now; sculptures have wire surrounding them to keep visitors off and signs give explicit instructions as to what is not acceptable behaviour. I guess the increasing numbers of visitors means management has to become more restrictive.

When I get back to the Weston Gallery to collect my bike I decide to walk over and talk to the man in the hi-viz jacket and get his take on the situation. Before I cross the road I notice an A4 sign on the car park entrance gate that is intended for visitors who’ve parked over the road. It explains how the YSP is a charity and the money it takes from the car park charges goes straight back into keeping the park ‘free’.

This is clearly disingenuous – the park is only free to pedestrians, bus passengers and cyclists. As the attraction is in the middle of nowhere the vast majority of visitors have to arrive by car and they have to leave their car somewhere so charging £12 to park is essentially the entrance fee.

As I walk towards the man I notice the car park has an all-weather surface of crushed stones. It forms a large, precise rectangular section of his big field – he’s set aside a piece of his land to grow a separate crop of cars.

The man is genial enough and happy to talk with me. He has a ruddy face from being outdoors most of his life. I ask him what is going on with the YSP car park. He shrugs his shoulders and says, ‘before they built that thing, the YSP sent word round that they intended to build it. All the residents objected.’ The man waves his arm vaguely about him. I look around me. The only things I can see are fields and a road. Where the residents are living is anyone’s guess.

The man continues: ‘It didn’t make any difference because the YSP knows it can do what it wants and it will get the permission come what may and so sure enough, they got it.’

‘Is that because the YSP is so popular now?’ I ask.

‘Too right, it gets visitors from all over the country – it’s a big earner for the council. The annoying thing is, years ago I applied for planning permission to build some grain warehouses. They refused me permission to build on here and suggested I store my grain on an industrial estate several miles away. What kind of farmer stores his grain on an industrial estate?

‘So anyway, even before that new gallery building was here people would park on the verges all down this road and walk into the park. The police was asking me if I could do anything about it ‘coz the cars were causing a nuisance so when I saw how much they were charging to park I thought of applying for a car park.

‘Course, as soon as I applied for planning permission, they objected,’ – he nods in the direction of YSP. ‘Except the council couldn’t really refuse me because they’d given them planning permission for that building and a car park. I’m actually doing them a favour now: a brilliant day like today and their car park gets full, visitors would just leave if they couldn’t park here. They tell me they’re a charity and need the money but they get grants of millions of pounds! I’m a farmer and I don’t make much money so I’ve had to diversify to keep going.’

I think of something and laugh, ‘So, instead of real cows you’ve created a cash cow with this parking area.’

The farmer enjoys the observation then says, ‘they used to have a sign up there that said “Official car park”. I don’t know why they’ve covered it up now. They’re just greedy. If they charged a fiver I’d stop this operation ‘coz it wouldn’t be worth my while. I can only assume they don’t do that ‘coz they’re still making lots of money even with me here.’

A car pulls into the entrance and the farmer walks off to attend to it. The driver of the car has his window open and he holds out his hand. The farmer takes the change, drops it into his bag and points to an area that still has some spaces. The car pulls off in the indicated direction.

As I watch, it dawns on me why capitalism is so successful. The farmer has pared his operation down to the absolute minimum requirements – hard standing, a couple of signs and him with a bag of money. He’s undercut the official car park by such a margin that the users of his car park aren’t bothered about any niceities. The farmer only needs to take money off people driving in – the users can stay for as long as they want and don’t need to bother with tickets or clock watching.

Capitalism is fast, nimble, innovative and predatory – perhaps how art should be?

Socialism however, is cooperative. Maybe if the farmer, YSP and some artists got together they could discuss the possibility of the farmer building his grain warehouse on the area where he currently has his car park but specify that it should be designed with a blank wall facing the oncoming traffic? The YSP and artists could then organise a mural or a regularly changing graffitti design that celebrates the YSP and points the way to the car park? Everyone wins.