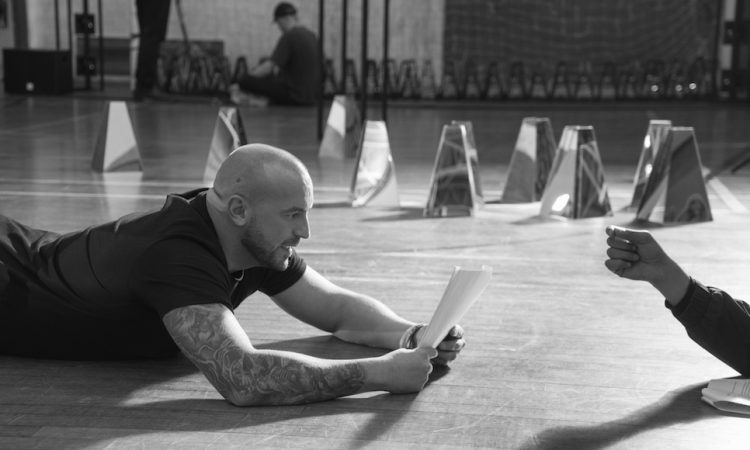 I Have Met the Enemy ( and the Enemy Is Us) by Common Wealth delves into the role we play both as a nation and individuals in the Uk Defence Industry. Words by Zoe Parker.

First of all, I am a massive fan of Common Wealth’s work. The first show I saw blew me away – Our Glasshouse set in a council house on an estate somewhere in Bradford. Its the sort of show that you can love even if you usually hate theatre. It concludes with an actor leaving the house in a car amidst a blazing row and it is thrilling. So it’s a delight that they are back with this new production.

I Have Met the Enemy is a political techno theatre show that asks us to take a close look at the UK arms trade and its consequences around the world. It asks what role you play in the arms trade. Above all, it is a call to action.

In researching the production, I learnt that the biggest arms fair in the world was hosted in London this month. Three days of deal trading, keynote speaking and hardware demos. This fair brought together some of the most brutal and oppressive regimes across the globe, with all the biggest arms companies. What’s noteworthy is that I missed this happening entirely. In contrast, I hear about the political ‘pantomime’ known as Brexit everyday. Why is that?

In this site-specific production we see a former British soldier and a Palestinian citizen examining their personal perspectives of war.  Enter a world audiences can explore freely – one charged with light, sound and a robotic installation. Audiences can choose to get actively involved, intervene or simply observe, but they will always be complicit in the action.

Be ready for a kinetic, sonic and visual environment including 72 electronic metronomes. These represent the 72 Eurofighter Typhoon jets sold to Saudi Arabia by the UK.

The two performers will guide audiences through the panorama of the arms trade. At times taking on the role of arms dealers, politicians and action heroes; at other times sharing personal stories based on their own lived experiences. Furthermore, the production will feature a third character, Shatha Altowai. Her artwork and materials were lost when her neighbour’s house was hit by an air strike.

We have been inspired by friends and family members who have experienced war directly. I Have Met the Enemy is an attempt to understand someone who has been positioned as your enemy. Our hope is for everyone to understand how close war is to each of us. The show will be a visceral experience. It will encourage audiences to confront themselves and the wider world to imagine something new.

I Have Met the Enemy (and the enemy is us) is a Common Wealth and Northern Stage co-production, in association with Chapter and Southbank Centre.

Location/Dates: TFD Youth Centre, Bradford, from 27 September to 5 October (and it will be made available via digital platforms on limited release later in the year.)

An introduction to the arms trade CAAT-

Invitation to Israel to DSEI –Arms Trade fair in London