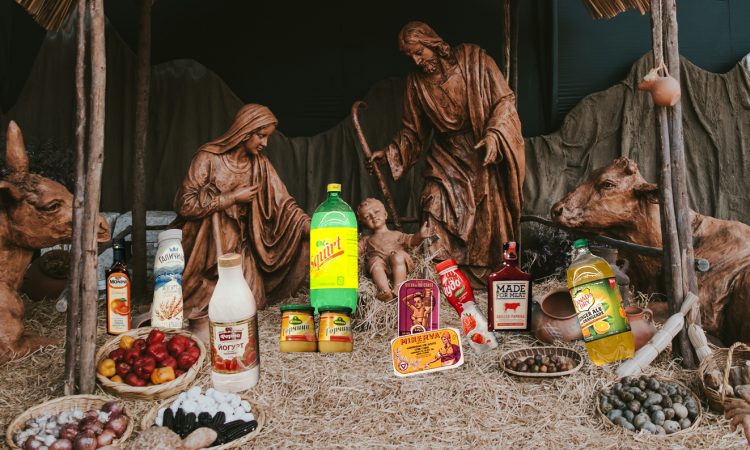 IVOR TYMCHAK has some thoughts about supermarket foodbanks.

A couple of days before the Festive holidays came to an end, I had to purchase some basic supplies from the local supermarket.

As I’d bought only a few items, I furtively went to the self-service checkout. I try not to use these checkouts, as they are job stealers – why have paid staff when you can convince the consumer to do the work for free? In this war of cost-cutting, convenience is the supermarket’s only weapon. Of course, as soon as all the staffed tills are gone and there are only self-service checkouts, that one advantage will be gone and the consumer will have to queue once again only this time for much longer as further up the queue, confused elderly consumers struggle to comply with the unforgiving technology and slow the process down. How long before the consumer is invited to stack the shelves too?

As I made my way out to the exit I came across a sight that had me completely transfixed. It took me several seconds to make sense of what I was looking at. It wasn’t a nativity scene; it was far more significant than that. It was a large cardboard box. On it was a sign inviting customers to donate food and other goods that would then be passed onto a food bank. What particularly arrested me was the amount of produce this invitation had attracted. Not only was the box completely full, but also the surrounding floor space was taken up with food piled up against the box like a ski slope. I looked at the donations: nuts, chocolates, cans of pop, cheese platters, bottles of cooking oil, soap, washing up liquid – in short, a good selection of the things you might shop for in a supermarket.

As I stood in front of this vision clutching my (lifetime) bag with its bought items, I stared at items that were exactly the same, but free. All the donated goods looked pristine, as if shoppers had gone into the supermarket, bought some items and then immediately deposited them directly onto the pile.

Such was the enormity of the moment that it took me a couple of days to parse the symbolism embedded in the scene and realize why it had such a profound effect on me.

The cornucopia of food and other items were the usual charity donations intended for the needy, so what was my problem?

Firstly, I have a problem with charities anyway – when it was the preserve of bored, privileged, rich people, I tolerated it but the recent explosion of food banks throughout the land has made me apoplectic. In a country as rich as England, why do food banks even exist? What is a government for? Why do citizens pay taxes—to make rich people richer or to look after those most in need? If we had a decent minimum wage, people with employment wouldn’t need food handouts.

The most incendiary aspect to the vision though was the normalization of the situation – like a typical nativity scene that doesn’t surprise anyone anymore.

The start of the charitable process is now in the supermarket itself and people accept it as normal whereas, for any person living in a democratic society, the sight of an overflowing charity box of food should be seen as a declaration of war. Such a sight represents a failure of government. Such a sight represents the consolidation of fascism – the labelling of a group of people in society as undesirables. Such a sight is an indictment of the apathy afflicting a people who have fallen asleep at the wheel.

First they came for the checkout staff…

Ivor Tymchak is an author