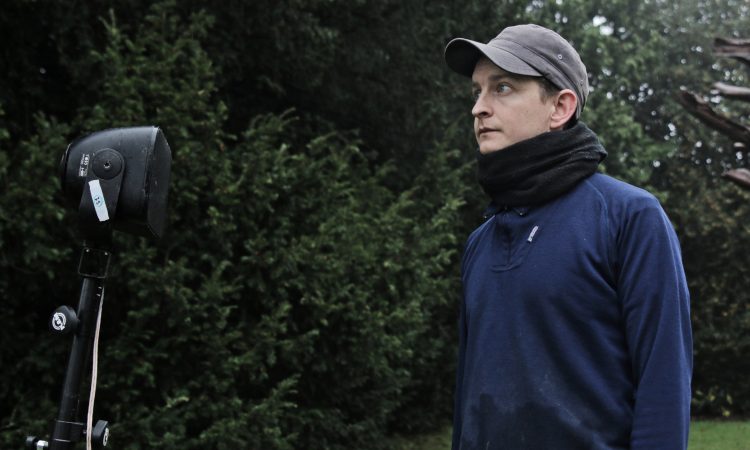 The film scores and site-specific installations of artist and composer JAMES BULLEY explore the metaphysical possibilities of physical location through sound. Which is why a daring new commission for Opera North finds him in the misty landscape of Yorkshire Sculpture Park at dawn. Interview by NEIL MUDD.

Growing up in Somerset, sound artist and composer James Bulley developed a passion for English Pastoral and French Impressionism, though his earliest musical memory is of listening through the floorboards to his grandfather play mess-hall piano in the room below: an early encounter with the acoustic spatial dynamics which characterises his work.

As a doctoral student at Goldsmiths, University of London, Bulley later immersed himself in the experimental electronic compositions of Daphne Oram. Familiar with her concert piece Four Aspects, when the opportunity arose to help organise Oram’s life’s work (bequeathed to the institution through musician Hugh Davis), Bulley volunteered.

In his words, he became semi-obsessed. “I worked on it when I could, and in the end spent about six years – it’s still slightly ongoing – cataloguing, organising, researching and having that opportunity. I very quickly realised what an extraordinary musician she was and how insane it is that she isn’t – and hasn’t been – recognised in that way.”

Oram, who died in 2003, was a key figure in the development of electronic music in post-war Britain. A sound engineer at the BBC during the war, she petitioned for, and co-founded, the Radiophonic Workshop in 1958, leaving less than a year later when it failed to develop along the experimental European lines she envisioned. Establishing her own studio in a converted oast-house in Kent, she created the Oramics machine in 1966, a kind of proto analogue synthesiser which generated sound from notation drawn on glass slides.

“She was successful to a certain extent,” says Bulley, “but not to the level that her music merits, especially given the scope of what she did. I tried to adhere to objective archival ways of making her work available and, where I knew there were people who might be interested in certain areas of the collection, making sure they knew (about) it. All those things are important when looking at alternate histories. It’s not about singular people and their opinions, it’s about making a body of work available in perpetuity.”

Oram was meticulous about writing everything down, he says. “Because she worked on her own a lot of the time, she kept tapes of all the test materials she’d used to build pieces [among others, Oram created sound cues for Lego and Stanley Kubrick], wrote down almost every phone-call she made, kept carbon copies of her correspondence. When I say she was meticulous, it really is astonishing the level of stuff that is there.”

While sorting through the archive papers of Davis, Bulley uncovered an annotated score for Still Point, a radical work for orchestra and turntables inspired by Oram’s experiences as a BBC radio sound engineer during the war. A proposed entry for the inaugural Prix Italia in 1950, it was rejected by a bemused BBC and the score thought lost. In 2018, Bulley, with fellow composer Shiva Feshareki and the London Contemporary Orchestra, realised Oram’s work at the BBC Proms, thus restoring it to public attention.

“I cannot think of a similar piece written by someone of that age that is so huge and adventurous in terms of how it works as a composition,” he says. “This is what made me really rethink how Oram is perceived and thought about. What’s really interesting about (Still Point) is that it never happened, so it didn’t have the opportunity to change anything, aside from now, where it’s started to change how people think about the history of music in that era.”

“It’s not only a totally adept and overwhelmingly eclectic way of orchestrating music, but underpinning it you’ve got this conceptual notion of the ‘still point of the turning world,’ which must be a reference to T S Eliot’s Four Quartets. Then there’s the turntables, which are not really being used in this way at all at the time – [John] Cage maybe, if you were to describe what he was doing as turntablism. Any one of these steps is quite mind-blowing. Taken all together and turned into piece that was never rehearsed or performed – to have created that piece in her head – is something quite other, I think.

“From my perspective as someone working in that area, it’s unfathomable. I can’t see how she conceived of it and it’s such a shame that it was a dead-end in terms of work for her because she just didn’t get the opportunities to see the piece rehearsed and performed, nor to get the financial backing to carry on this aspect of her work.”

Something of the spirit of Daphne Oram suffuses Bulley’s new commission for Opera North, an ambitious immersive soundscape for an interactive online trailer by Lusion Studios promoting Benjamin Britten’s Turn of the Screw. In 1961, Oram conceived an experimental soundtrack for Jack Clayton’s film adaptation of Henry James’s novella, a ground-breaking contribution for which she received zero screen credit.

It is one of the reasons Bulley, and a team from the University of York, find themselves on the Cascade Bridge at Yorkshire Sculpture Park on a chill November dawn. “It did absolutely draw me in,” Bulley says. “There are uncanny aspects to Britten’s work that haven’t been unpicked and I do see Oram on that level. It felt like a very natural thing for me to do this. There’s an aura around Turn of the Screw, and The Innocents and the work (Oram) did on it, that just makes complete sense. It’s really fascinating.”

With Opera North, Bulley says he has enjoyed total freedom. “Obviously that risks failure, experiments not working out, but even then, you’re experimenting and pushing the form. Especially with opera, which has always pushed boundaries of what music, performance and dramaturgy can do. It’s not staid the way people think, and that becomes apparent when you look at works like Einstein On the Beach [by Philip Glass and Robert Wilson].”

In a process he describes as ‘worldizing’ – a kind of physical image of real acoustic space – Bulley uses an ambisonic microphone, together with a series of tiny omnidirectional mics, to recapture a lone soprano voice – recorded in an acoustic-neutral anechoic chamber at York University the week before – emanating from a speaker placed at the far end of the bridge. It is a spine-tingling moment, the ghost of an idea awaiting exorcism.

“A few years ago, I went to a screening of The Conversation and [Hollywood sound recording legend] Walter Murch was doing a Q&A. He talked about studio recording and being able to take it out into the world and embrace the beautiful complexity that comes from putting sound in a natural context. He terms it ‘worldizing’ and it’s something I’ve held with for a long time. This Opera North piece is the first experiment in a long line of things I’d like to do to explore the potential of the core ideas.”

“To take a piece of music out into the landscape does extraordinary things to it,” he says. “That experience of being there at dawn – hearing music like that – there’s something about it which opens up being in the world. Things have got more and more abstracted in terms of space and location, packaged so they can exist anywhere. What this achieves is an accuracy to these acoustic spaces that surpasses their recreation in a studio using plug-ins and hardware simulators to emulate sounds.”

Some of the issues raised are more convoluted and complex than that, however. Earlier our conversation had turned to producer Don Zientara, whose recordings of hard-core punk band Minor Threat used a minimal microphone arrangement to retain the raw energy of hearing the band live.

“In a sense, it may seem counter-intuitive to everything I’ve just said,” Bulley says, “but the way early Sonics’ songs are recorded – a couple of mics, one on drums and one for the rest – that is an incredible cohesive spatial sound. Despite the fact it’s ending up as a mono thing, they’re all grouped together in a singular space making a shitload of noise in a room. It sounds fucking great and that is the experience of that space. That’s real to that space.”

“I think what’s interesting in film over the past twenty years is the massive progression in terms of what you can do visually. At some point will come the ability to shoot 360o film in a meaningful way. I don’t think microphones have got anywhere near that. They’re still relatively crude and there are huge technical challenges, which is why so much post-work in the studio is important in (cinema).”

Bulley’s film practice is mostly documentary based, where authenticity of sound to environment lies at the form’s core. He recently worked on Island (2017) by Steven Eastwood, a film that explored four peoples’ end of life experiences in a hospice on the Isle of Wight.

“It’s an incredibly sensitive portrayal of the truth about dying,” Bulley says. “The problem with scenarios like that is you can’t have a sound crew in a room. It’s just one person with a camera. With that film, I had the opportunity to go to the Isle of Wight and be in the rooms where things were shot (and) to record every element; spend time on the ferry over; everything within the film. I had a huge long list and spent three days recording and matching to perspective.”

The logical next step for film-makers, he says, is to think about the recording and playback of sound in site-specific spaces from the very beginning. “Especially when you do it in a spatial way, you will always achieve a better effect in a landscape than trying to achieve that ambisonically in a studio. Obviously, you can do incredible creative things in a studio, but if what you’re aiming at is to create the sensation of being there, of being in the world, then be in the world; don’t fake it. That seems very logical. It seems so simple and obvious but it so rarely happens.”

“From the very beginning [with Opera North] that was the premise and it clearly does work. It almost works too well within the actual piece. If you were able to hear a (comparison) of a studio created version versus that ‘worldized’ version, you’d hear a huge difference. It sounds so natural and well-embedded, you almost don’t notice it – and that’s a good thing, I think.”

The project was supported by XR Stories, a £15 million investment by the Arts and Humanities Research Council, University of York, BFI and Screen Yorkshire, set up to understand and exploit the potential of new immersive and interactive technologies for storytelling.