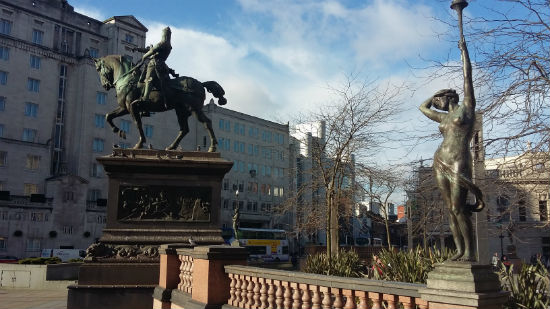 Sally Cooper wants a new statue in City Square to start celebrating the achievements of some of the women of our city; what do you think?…

As we approach the centenary of the first women gaining the right to vote in England, is it time to update the public art that welcomes visitors to our city?

On exiting Leeds’ railway station you come onto City Square – an open space dominated by a number of imposing statues mostly commissioned towards the end of the 19th Century and erected in 1903 to celebrate the town of Leeds being awarded official city status.

The main statues reflect the politics and social order of the day; a noble prince astride his worthy steed, a theologian, a wool merchant and an inventor as well as the city’s vicar. Not surprisingly, these are all men.

There are also eight unnamed female figures, naked apart from material draped across the shoulder.

Whilst I have no prudish objection to female nudity, in this context it feels wrong to be celebrating the achievements of five flesh and blood men without acknowledging some of the real-life women who have also helped to build our city.

My suggestion for a named feminine statue would be Isabella Ford. Born in Headingley in 1855, Isabella Ford was raised in a moderately wealthy Quaker household, encouraged to discuss and engage in politics from an early age.

Her father ran a school for female mill workers and it was there that she gained an insight into the working and living conditions of the women who kept Leeds’ most lucrative industries going.

Isabella is acknowledged as a friend of the better-known campaigner Millicent Fawcett and she also came into contact with other ‘leaders’ of the emerging suffragist movement. She never attained the fame of some of her contemporaries, perhaps because she never achieved infamy. Rather than using the headline-friendly tactics of better-known campaigners she was instead one of many unheard of men and women who studied and developed meaningful arguments around the benefits of allowing both genders the right to a democratic voice.

Recognition of Ms Ford in particular seems apt, partly because she was becoming politically active just as the statues now standing in City Square were being commissioned and designed, but also because in March 2018 we have an opportunity to celebrate 100 years since the first women were allowed to vote here (women over 30 gained suffrage rights in 2018, true parity came later).

Plenty of people will say there are better things to spend money on in these times, but while women still face discrimination in the workplace and at home, lower wages and less meaningful representation in global political circles, I’d really like to see accomplished women of Leeds being publicly celebrated for their achievements and not just their physical form. And without wanting to make this yet another article about Donald Trump and his views around women, this is clearly a time when we have to shout out louder than ever about equal rights.

If Leeds truly is the forward-thinking modern city it purports to be, then it’s time for us to publicly champion some of the women who have helped to lay the foundations of our city’s reputation.

I’d love to know what others think, and whether there are other women of Leeds who deserve this kind of acknowledgement?