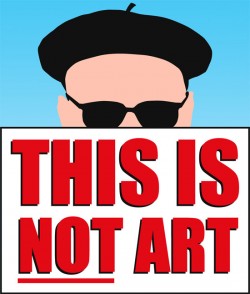 Firstly, I must apologise to Andrew for sharing my bodily fluids with him. I also feel like an exploitative parasite because he doesn’t even know that the congress occurred.

It happened like this: I was sat alone on the front row of the auditorium waiting for the audience to arrive. I had finished my complimentary wine and wondered what to do with the empty plastic glass. I considered putting it on the floor like an uncouth day tripper but then I spotted a table in the corner of the room with a couple of bottles of water on it and I decided the responsible thing would be to leave the glass there. Eventually the crowd entered and I noticed Andrew take a seat immediately next to the table. As he waited to be introduced he spotted the bottles of water and helped himself to one. He then noticed my empty glass and must have deduced it was a clean one left especially for his benefit so he filled it with water and drank from it. I watched mortified. It was like a melodramatic scene from a Caravaggio painting exploring the moment of betrayal, or something.

So, I apologise Andrew for exposing you to some dirty Northern bacteria.

His rambling talk did actually involve Caravaggio and he showed a half-decent image of one of his paintings. He was trying to … well, I’m not quite sure what he was trying to do but he spent a lot of time slagging off the inflated London art market controlled by idiot buyers. In his opinion, no real art is being produced there because no unrecognised artist can afford the astronomical rent and no gallery can afford to show their work even if they wanted to as they have to cover their exorbitant rates by selling mass produced crap by famous artists for millions of pounds at a time.

We know all this anyway but he was merely confirming it. But here’s the thing; when he says it, it has authority because he’s an expert specially flown in from London (or wherever he lives) and we poor, ignorant provincial dullards need to pay attention.

He even went so far as to complain how crap the art galleries look and how awful the lighting is for illuminating these tired, ironic, pieces of shitty art.

Like he cares. I noticed how some of his slides were pixelated, had washed out colours or were so contrasty that no detail was visible. Really Andrew, if you’re going to criticise someones aesthetic you’d better make sure yours is at least superior to theirs.

The hypocrisy on display within this whole art event was as depressingly familiar as that found today in politics, the media or finance. He was right in his observations but he wasn’t helping either.

For all of that, he came across as a really likeable chap who didn’t allow his cleverness to overwhelm his humanity or intimidate less well-educated people.

In an ironic sort of way he inspired me, which can’t be said for a lot of the stuff exhibited in art galleries these days.