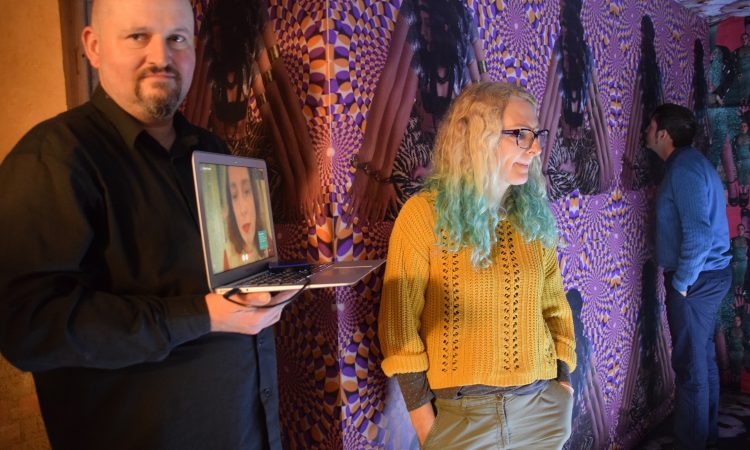 The future of Beeston’s unique BASEMENT ARTS PROJECT is in doubt after thieves stole IT equipment from BRUCE DAVIES’ home .. which doubles as a gallery, a meeting space and a gateway to the arts in South Leeds. RICHARD HORSMAN reports.

This was meant to be a celebratory feature.

On Monday, I paid my first visit to the Basement Arts Project, which for seven years has been situated in a terrace off Dewsbury Road just a stone’s throw from the Beeston Aldi.

Bruce Davies, the founder of the project, was cooking curry.

It was one of the regular cultural conversations round his family kitchen table. By the time the poppadoms were ready eight or nine people had gathered. Some were artist-makers – painters, sculptors, photographers – whilst others like me were just curious to hear more about the current micro-exhibition being staged in the basement under our feet. One participant .. an Italian artist now living in Iceland, whose installation is part of the show .. joined us by Skype. 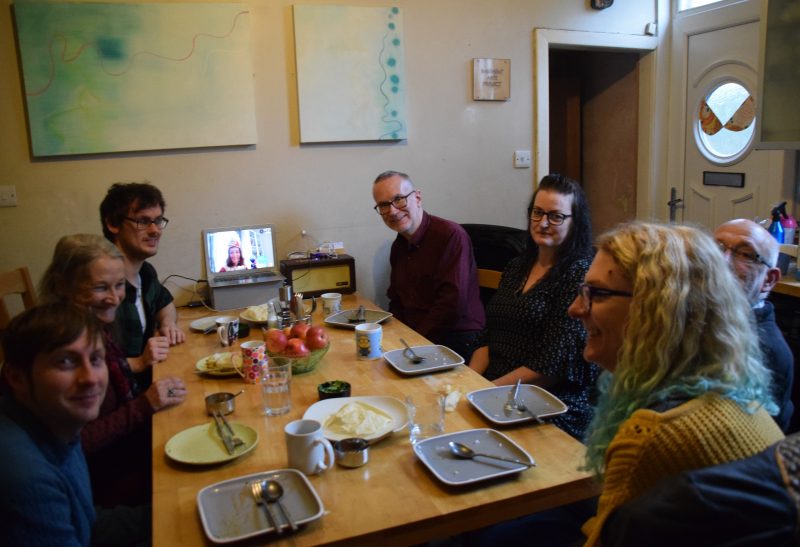 On Bruce’s laptop. Which has now been stolen.

The exhibition itself is fascinating – Michael Borkowsky and Emilia Telese have created works inspired by smell. Michael’s perfume portraits aim to capture the motivations for making art; he’s built a kind of alchemist’s lab with bottles and test tubes in half the space, whilst Emilia has created a cube-like installation featuring her image printed onto what can best be described as scratch and sniff wallpaper in the other half. 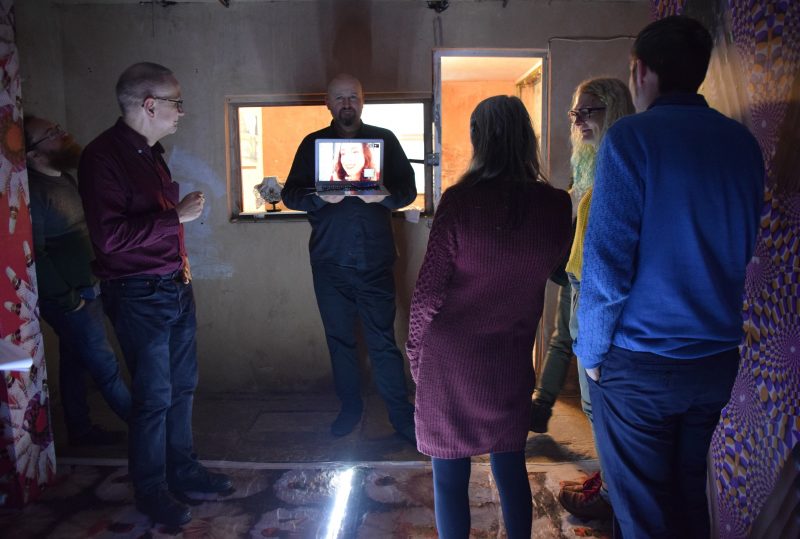 I’ll be writing more about that show elsewhere on The CV; what matters for now is that it could be the last show ever staged in the Basement Arts space.

This is how Bruce announced the devastating news on Twitter early yesterday:

At about 5am this morning BasementArtsProject, which is also my home, was broken in to. Along with my daughters phone they stole my computer and back up hard-drive.

Now whilst the kit can be replaced, the records and planning stored on the machine (and the backup drive, also stolen) is gone for good:

I do. Because all of my design software has gone too along with all of the documents and archives I see this as the end of Basement. I will never afford to get it all back.

And that’s when he suggested the theft could mean the end of the Basement Arts Project:

I think as it Gambling Awareness Week their motto of ‘When the fun stops, 🛑’ is appropriate.

Your exhibition by the end, will have been our second most visited exhibition. I’m happy, as I can be, to end it there.

Now local people and the Leeds arts community have rallied round and an appeal for the return of the laptop (immediately locked, and useless to any criminal or bargain hunter) is being circulated. Dealers are on the lookout for it. But the threat to the Project remains.

The loss of this gallery and cultural gem in South Leeds would have a massive impact. Bruce told me that local estate agents are already mentioning the Basement Arts Project in property particulars as a feature to attract buyers to the area.

In conversation in his kitchen, whilst other lunchtime gathering participants discussed their latest work, or planned collaborations, he told me more of the ethos behind setting up a gallery in a Beeston terrace:

It can only be hoped the data can be recovered; it’s of no use to any criminal, and the hardware is now a hi-tech brick.

Someone should put it on a plinth; in its own way, there’s artistic comment in a dead, locked laptop on the value of community culture in a consumer economy.

As for the future of Basement Arts; only its creator can decide that.

(who was one of the guests at Bruce’s lunchtime conversation on Monday, and who started a new collaboration with TheCV as a result – just one example of the creative stuff that happens at these gatherings)