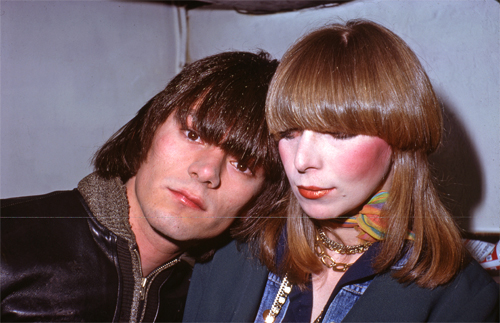 “The story of The Fast, the Zone brothers’ band, was heroic,” writes Debbie Harry in her pithy foreword to Playground (Glitterati Incorporated), lead singer Paul Zone‘s photo-memoir of the New York underground in the seventies. With its motley assemblage of rock stars, junkie actors, drag queens and various other acolytes – all of whom will be insistently familiar to anyone who has read the Legs McNeil and Gillian McCall grubfest, Please, Kill Me: The Uncensored Oral History of Punk – the book is engaging enough, if rather lacking in piss and vinegar. “More known to those in the inner circle than to the masses,” notes Harry tellingly, a precociously flamboyant Zone was on-hand to snap away with his Instamatic camera and document, amongst others, The Ramones, Blondie, Suicide, and his beloved New York Dolls, when few others really cared.

It is these images which make up the bulk of Playground and which will no doubt find the book its audience. Enthusiastic visitors to Tate Liverpool’s recent Warhol exhibition certainly suggest that the New York music-arts scene still holds a visceral fascination for a section of the population. Indeed, Factory regular Lou Reed makes an appearance here, as does a blearily amateurish Iggy Pop. (By the author’s own admission, stadium photography is not his strong suit.) Zone gravitates towards the up-close and personal, an approach also favoured by the likes of Nan Goldin and Eileen Polk, with whom he is often compared. These are not the slick constructions of someone like Annie Liebovitz. Wearing a camera around his neck throughout the seventies, Zone took some wonderfully candid shots: a silvery, androgynous Alan Vega, an ingenuous shiny-faced Debbie Harry, an off-duty Wayne County. There is even a brilliant, rare moment of intimacy between Dee Dee Ramone and his terrifying girlfriend, Connie Gripp. These are photos which crackle with an infectious urgency, revealing far more about Zone’s relationships with his subjects than the mandatory autobiographical sketch which precedes them.

If the book has one flaw it is this. Told in his own words, Zone’s story is rich in surface detail – names, dates, places, what fabulously outlandish outfit he happened to be wearing at the time – but not much else. Considering that The Ramones rehearsed in the family basement, and Blondie looked to him for fashion tips, there is scant new details on offer. Joey Ramone is described as being “as caring a person as you could ever meet.” An awkward encounter in a New York lift between the Zone brothers and John and Yoko is as flat as that sentence makes it sound. Zone hangs out with a couple who were “among the last people to visit Sid and Nancy the night Nancy was stabbed to death.” For a scene notorious for its dark excesses, this is hardly the stuff of legend.

This is not to say that there is nothing noteworthy in Playground. After all, this is the Jewish boy who sported a Hitler moustache to high school in honour of Sparks’ keyboard player, Ron Mael. Some episodes are shot through with a deliciously dark sense of humour. For example, describing the funeral of transexual model and porn star Jill Monroe, attended by a dozen transexuals, all of whom shared the same plastic surgeon, Zone conjures the image of a “bizarre Brazillian Stepford Wives.” There are a few more such vignettes, but generally the whip-smart pacing leaves little room for insight or reflection. Ironically, Zone is guilty of banishing to the periphery the very intimacy for which his photographs are celebrated.

When Zone does get it right though, the effect can be startling. Incredibly moving is the story of the UK chart success of Hi-NRG crossover hit, Male Stripper. Called upon to perform the song on Top of the Pops – a particular ambition of Zone’s older brother Miki, with whom he had written and recorded the track, and who by this time was dead from spinal meningitis brought on by AIDS – Zone is instead forced to appear alongside a pair of male go-go dancers hired for the job. Watching it via YouTube, it is clear that he is more than a little uptight, and he takes time to warm up. Dressed in patent black leather like something out of Kenneth Anger’s Scorpio Rising, he wears Miki’s white nautical captain’s cap by way of tribute. The audience is up for it from the start though and whoops wildly throughout. “It was a dream,” states Zone, borrowing from Ray Davies. “Miki’s glittering, grand rock n roll dream finally realised.”

There are other moments – clearly still raw – which are signposted, but never followed further. Perhaps Zone is missing a trick? Or perhaps it is simply nobody’s damn business? Whatever the reason, people are most likely to buy Playground for the photographs. These are great: the personal stash of a starry-eyed boy for whom New York in the seventies was simply one, big dressing up box.