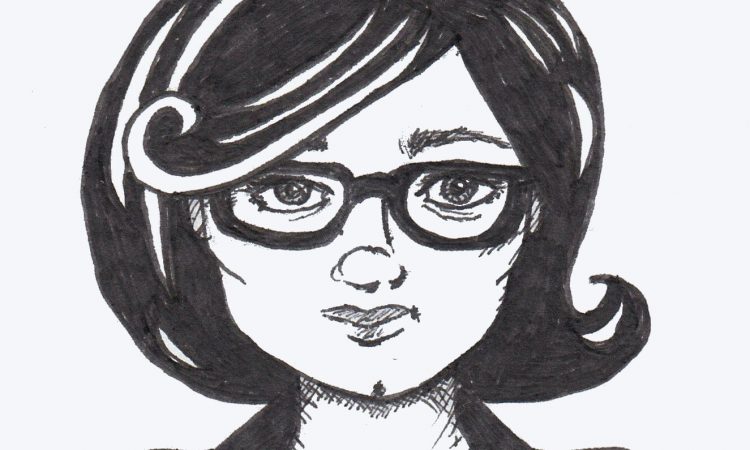 Self-Portrait of the Artist by Eli Allison. Sour Fruit is out now, published by Unbound.

Most people don’t go beyond the safety of the usual mundane holiday destination questions when they chat to their hairdresser, but a chance comment from mine about his friend’s new book intrigued me.

He described her crowdfunded novel as ‘pretty out there’ and ‘really sweary.’ Not exactly Chick-Lit then. I liked the sound of this woman, and was determined to seek her out to find out more.

“I guess I’ve always been fairly mucky,” laughs Eli Allison as we sit having coffee a few weeks and several rounds of my Twitter stalking later, confirming my suspicions that she’s a writer with a difference.

Her debut novel Sour Fruit is a speculative thriller set in northern Britain in the not too distant future. The story follows a young girl named Onion and her desperate attempts to escape the horrors of the fictional dystopia of Kingston and dodge becoming a VOID.

It’s not a book for the fainthearted: vomit and other bodily fluids feature heavily, and the main character pushes the boundaries of taste.

“Yes, she is fairly disgusting!” Allison admits. “She actually started life in a short story, but I knew I had to do something else with her.”

Onion was adapted slightly. The original short story character being older and in prison, she needed to be younger to fit as a VOID in the murky underground world created in the novel.

There wasn’t a conscious drive towards Young Adult fiction – the book is very adult in its themes – but Allison feels older teens would get a lot out of it. And as for the fruity language, that’s quite eye-opening.

“That was one of the best bits, the research. Urban Dictionary was one of my favourite websites to use,” laughs Allison.

She acknowledges there has been a shift in perceptions recently and more acceptance that there are female voices with an edge. That gave her more confidence to write in her own style.

“Seeing things like Fleabag [from writer Phoebe Waller-Bridge] mean those voices are out there now and that gave me the strength and confidence to say maybe there is a home for this.”

Finding the right support was vital in building that confidence. “That’s why Unbound were great because it’s all about your book the way you want it. They help you to make it the best version of what you want it to be. They don’t curtail you.”

Crowdfunded and published by Unbound, Sour Fruit was four or five years in the making, a situation she knows is quite common for newbie writers. “You’re kind of feeling your way in the dark a bit. But by the time I found Unbound I had something a lot stronger.”

Allison heard about Unbound when listening to an interview with an author on Radio 4. “It sounded like it was right up my street. It’s quite a hard process and it did push me out of my boundaries.”

That push was welcomed though, “At the end of the day I’m a writer and an artist, but I need to sell books, so I need to learn how to do that.”

Crowdfunding was difficult for Allison, turning her from an introverted writer into someone demanding money from strangers.

The process of securing the funding took about nine months, culminating in the book’s ‘birthday’ on 16th August. But that wasn’t the end of the hard work, Allison then had to start pushing herself in a different way and marketing the book.

“It doesn’t come naturally, but I’ve got a lot better at it. Whatever your niche is, you have to find it and just go for it.”

Local bookshops are always happy to stock a local author, but a key part of the success has been e-books, “That’s the drive when you’re a debut novelist. Most people will take a punt on an e-book, but not always on a paperback.”

Allison acknowledges that her book might be, as she puts it, “a bit Marmitey.” It’s raw and visceral, but she had always thought she would write sci-fi or speculative fiction.

“I’ve always loved sci-fi and the big ‘what if…’ questions, so I always knew the direction I’d take, but I didn’t know quite how sharp she (Onion) would be.”

It can be all-encompassing though, being in that world inhabited by Onion.

“Some of the things I put her through were really quite horrible, and you have to imagine how it would feel so it can be quite exhausting. You get really locked in and the research for some of the aspects was pretty rank, so I needed to separate from it a little bit. We definitely had to watch nice things on the telly afterwards.”

Becoming a writer wasn’t always the path Allison intended to take. She has been producing artwork for commission for a while and the writing was a natural progression from there.

“I’ve always really loved daydreaming, and the best bit of writing for me is the daydreaming. I love building worlds, which is why I’ve stuck to sci-fi.”

Allison is a very visual writer. “I do map work for the places and the characters, it helps me to understand them a lot better. I also do massive bios for them, even things that don’t ever end up on the page. I know who they are and what they say.”

Sour Fruit‘s fictional northern city of Kingston, a future world that perhaps reflects the fears of the times we live in now. is loosely based on Hull.

“One of the reasons I picked it was because of the flood a few years back. It felt like the people of Hull had been abandoned.” She saw potential in the idea that problems in future,such as flooding, will mean there will be hard choices to make.

“The south and London would get the flood defences, while places like Hull would be left open for degradation.”

Owning to feeling a little bit of guilt about using Hull as a basis for the story – particularly as last year it was UK City of Culture – Allison sees the positives: “I think it helps to have the story grounded somewhere, just to give it a texture and an element of reality. If it ever gets rolling I might do walking tours around Hull.”

The novel is the first of a trilogy, and Allison has already started work on the next instalment. “I’m a plotter, I already know how the trilogy is going to end, so I can put things in that can weave all the way through and it really gels everything together.”

She admits that she found it hard to commit to that though, “There are some new subplots, but I know exactly where I want it to go. I’ve tied myself into that from the first one, so I can’t deviate too much, or the stuff won’t make sense!”

Beyond the trilogy and Onion’s journey, Allison is keen to incorporate more visual aspects into her work. “I’ve always had a soft spot for graphic novels and I’d be really intrigued to have a go at that.”

There is even scope to extend Onion out from the central novels, “She’s always telling stories, and I’d love to have a go at an illustrated version of those urban legends within the book.”

That vision fits perfectly with Allison’s love of creating visual work. She loves to doodle quotes, and her website and other social media is full of illustrations and creativity, which really helps to build that connection with her audience and extending that into her writing seems like a natural progression.

“I definitely think there should be more integration between words and art.”

We’ve overstayed our welcome in the café. As the impatient staff sweep the floor around us and verbally push us out of the door, Allison wonders when she’ll feel like a proper writer. Based on our conversation, I reckon she already is one.

Sour Fruit is out now. For more information check out Eli’s website