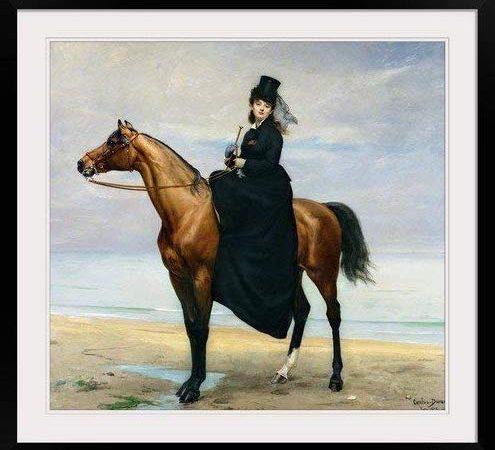 Clancy Walker spoke with author Gina Dale about how a short story has developed into three novels, nearly 400,000 words and possibly more to come…

It all began with a lady upon a horse… the challenges of writing an historical fiction trilogy.

Author Gina Dale started out writing a short story based on a picture in her study for a homework exercise from her creative writing course. Three years later, she’s just finished writing the first draft of the third book in a trilogy about the life, work and loves of 19th century artist Carolus-Duran – a contemporary of Monet, Renoir and Manet.

You say, “it all started with a lady on a horse”, I love a good hook, tell me more!

I was taking a creative writing course a few years ago and we were asked to choose a picture to write a short story about, really just to find a spark to get us started and into the discipline of observing and writing.

As an avid horse lover, owner and breeder I’d recently been looking for a picture depicting a lady riding side saddle for my redecorated study. An online search brought up several but Carolus-Duran’s ‘Mademoiselle Croizette’s Equestrian Portrait’ was stunning, and a very large print is now hanging above my desk. I started to write the short story, but the more I looked at this painting, the more I was drawn to find out about it, and the artist, and I quickly realised I had more I wanted to learn, and write, about.

What was it that particularly sparked your imagination?

I found references to Duran being the son of a ‘hotel owner’ and one stating his father was a ‘horse breeder and dealer’. I believed his skill of drawing horses was far more likely to have been fostered as a child, and there was no doubt that the artist had a sound knowledge of the anatomy of a horse as the depiction of the muscles and bone structure were exemplary.

I was intrigued about this possible discrepancy in documenting his early years, and then hooked by his life story the more I learned. For example, I discovered that the girl in this portrait was not, as I had assumed, Pauline Marie Croizette, who became his wife, but Sophie Croizette, her younger sister, an actress.

It sounds like a great idea for an historical fiction novel. When did you realise it might be more than that?

When I first researched Carolus Duran’s history and delved deeper into his life I realised that there were so many interesting facts that one book would not suffice.

Uncovering such rich material the deeper I delved, I decided on a trilogy to cover the life of Carolus-Duran and his family, using factual material wherever possible but weaving a fictional story around them.

I also soon realised that his daughter’s marriage to Georges Feydeau weaving acting and writing within the art world created even more opportunities.  I decided to make the first book, Brushstrokes, about Charles and Marie’s love story and marriage combined with his artistic and musical life. The second book, Darkness Falls, is all about their experiences during the Franco-Prussian war and book three, Drama Unfolds, about their daughter Marie-Ann.

How much is fact and how much is fiction, and does this vary by each book?

I had plenty of historical facts to follow but I created the characters based around those facts as I believed they may have existed, but I could also be very wide of the mark.

Weaving a story around the facts requires some characters introducing that are fictional because you have complete freedom to move them about.

The third book has a time span of 20 years and was hardest to write from a timeline perspective but, having just completed my first draft and sent it to my editor, I’m pleased with what I’ve done and am looking forward to her feedback and starting with the editing process.

How do you find working with an editor, and what advice would you give to other writers who are considering independent publishing?

I’m a firm believer that you can’t edit your own work; you need to find a good editor and importantly one who knows your genre.

Self-publishing, or independent publishing, is much more accepted these days, in fact it can be more successful, but I’m afraid to say it’s because some writers don’t enlist the help of good editor that there is still sometimes a stigma attached.

I did consider, briefly, trying to find a publisher for my work but a number of factors influenced my decision – not least that I didn’t think I could deal with the frustration and knock-backs, and time was of the essence because of my age!

My first draft of book three ran to 172,607 words which forced me to do a serious edit down to 150,000 words, but ideally could do with further pruning to under 127,000 to keep in line with books one and two.  However, I have decided to leave this until my editor, Rachel, has reviewed it all and then decide whether to remove any scenes without harming the continuity of the storyline.

Rachel has actually started on her edits – she was working between Christmas and New Year so that we can meet the end of March target for book three – and I’ve had a few sections back already.

A great designer for your book cover is also essential – again, finding someone with the right experience who knows your genre is really important.

What do you find most challenging as a writer?

I’m told my writing style is as a screenplay and I see the images in my mind and then put them into words.  Because the scene setting is important to me in telling the story this can make some passages overly descriptive.  After Rachel’s edit we will discuss possible areas to cut if necessary. I like to give my readers solid characters whom they can understand and believe in, so they need to know what they are thinking as well as what they are doing.

The marketing is also a challenge and know through my business life that this is something you have to invest in and get support where needed. I have only fairly recently started to get involved in the world of social media and I’m enjoying Instagram particularly – I love that it’s giving me the opportunity to link to people who are interested in Carolus-Duran’s art, and I’ve already had my first fanmail through my DMs!

I write under a pen name, because I value my privacy – I write because I love to write and want others to hopefully enjoy reading my work, not for any fame. I have heard awful stories of other writers who couldn’t cope with the pressure of success, and whilst I know I am still only a fledgling writer compared to some it’s very important for me to keep my writing and personal life separate.

And what next, it sounds to me like you might have bigger plans for these stories and that you’re not finished writing about these people yet?

I would like to do a complete book on Henri. I have also discovered that two of Feydeau’s grandchildren married men who were French resistance fighters who died in WW2 and would like to write a WW2 book.

As someone who writes with scenes in mind I would of course love for the trilogy to be developed into a screenplay, and I’m a huge fan of Sally Wainwright – I went to see her at the Todmorden Book Festival last year and it would be amazing to work with her, you never know…

As a bit of fun I started to work out who I would like to play the various characters in my books based on age, experience and professional skills.

At the top of my list is one of my favourite actors, Richard Armitage, and I think he would be perfect for playing Carolus-Duran, and he already has experience of playing a 19th century artist as the young Monet so maybe it’s meant to be!

I also think Clive Standen would be great as Henri, and I’m sure we could find roles for Aidan Turner, Luke Evans and Orlando Bloom if they were available!