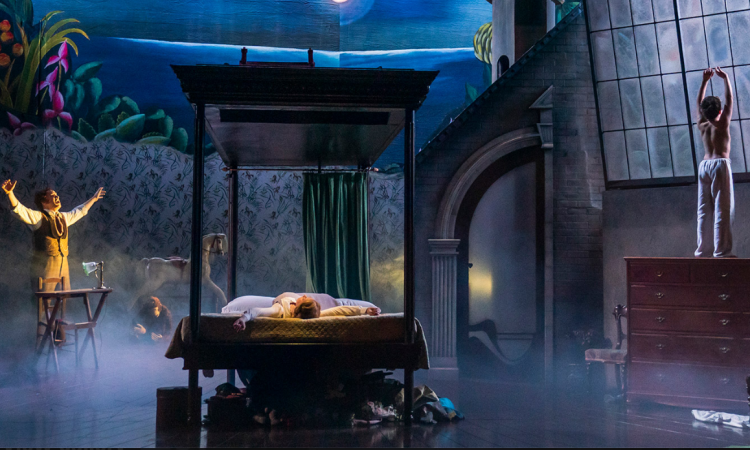 The Turn of the Screw – Opera North at Leeds Grand Theatre. Review by Ron Simpson.

Since its initial publication as a novella by Henry James in 1898, The Turn of the Screw has enjoyed enormous popularity in print and in various forms on film and on stage. Unfortunately, for me, it has always been a distinctly unlikeable creation in whatever form it has appeared – including the 1954 opera by Benjamin Britten.

So it was a welcome surprise to find it beginning to make dramatic sense in Alessandro Talevi’s excellent production for Opera North ten years ago. On revival it is equally impressive, the second act becoming genuinely engrossing, though it is still not easy to buy into the characters.

The now well-known story tells of a new governess, unnamed, who accepts a post at Bly, a remote country house, to look after two, presumably orphaned children, Flora and Miles, and to take full responsibility for them, never contacting their guardian. The only other inhabitant of Bly is Mrs. Grose, the housekeeper. Initially the children seem perfect, but it gradually emerges that they are in thrall to the evil ghosts of Peter Quint, the guardian’s valet, and Miss Jessel, the previous governess.

Or are they? In James’ story only the Governess sees the ghosts, inviting a Freudian interpretation: the apparitions are not ghosts, but the product of her own hysterical imagination. In Myfanwy Piper’s treatment for Britten’s opera, that ambiguity disappears – they are seen by, and converse with, other characters – but other ambiguities remain: what form did their evil take in life and now as ghosts, are the children evil or innocent victims, what part does the Governess’ hysteria play in the story, what are we to make of her apparently unhealthy relationship with young Miles?

Talevi’s production takes one or two liberties with the original, most notably the replacement of Miles’ piano recital with an odd, eerie, angular, semi-gymnastic dance to the piano music on an ancient gramophone. Madeleine Boyd’s superbly expressionist Gothic country house set is dominated by a four-poster bed and a massive sloping window through which many of the more menacing apparitions are seen. With the aid of Matthew Haskins’ gloomily mysterious lighting silhouettes and shadows loom over the action and figures are revealed or disappear in a way that blurs the boundaries between reality and imagination, between presence and absence.

Sarah Tynan’s gleaming upper register sits perfectly with the optimistic self-confidence of the Governess at the start before gaining an increasingly hysterical edge as the opera progresses. Similarly, Heather Shipp’s stolidly complacent Mrs. Grose fractures into overwrought duets with the Governess. Nicholas Watts (also a calmly controlled Prologue) and Eleanor Dennis express the “otherness” of the ghosts with creepy conviction, but – probably rightly – the children are the most disturbing characters. Jennifer Clark and Tim Gasiorek go to the heart of the opera’s ambiguity, with a watchful stillness at times that suggests they are somehow outside the scene. The 11-year-old Gasiorek is remarkable, the final scene when he appears as a mini-Peter Quint an eerie transformation of the little boy.

My one criticism is that, given Britten’s emphasis on the importance of the words, titles would have been welcome in a piece which is carried so much by overwrought, sometimes distorted high voices which inevitably lack clarity of diction at times.

The Turn of the Screw, Opera North, Grand Theatre Leeds, until 19 March.