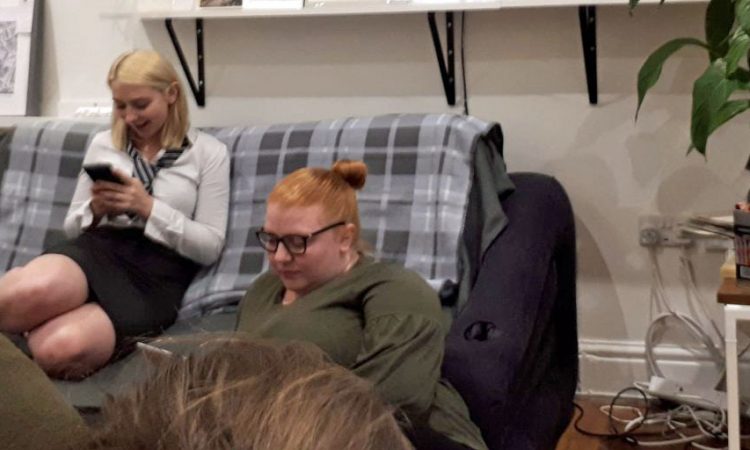 Brenda’s Got a Baby is a verbatim play from Bradford-based theatre company Bloomin’ Buds. Based on interviews, news stories and personal experience, CATHERINE SIMES saw it at Bradford Fringe Festival.

Bradford’s Fringe Festival prides itself on bringing theatre to unusual places. Performed in the city’s Bread + Roses cafe, Brenda’s Got a Baby is a piece of verbatim theatre fictionalising real-life stories of pregnancy, ambition and choice for working class women and girls.

Taken from interviews with students and young mothers, the play tells the story of two sisters and the different struggles and paths they take with children and education. If you’ve been to school in Bradford, this play was an experience in time travel in its familiarity and honesty. There’s something about Bradford voices that have a naturalness and tone where bullshitting is not allowed.

Taped extracts of the interviews interspersed the performance, “Middle class people have aspirations, and the choice and security to fulfil those aspirations, they have the means”. The play never lets you forget that these are real stories, real lives, choices and consequences.

The characters, sympathetically and subtly played by Katie Mahon and her real-life sister Jenny, well represented the struggles faced by many girls in Bradford today. While being rooted in the personal experiences of the interviewees, the play also posed some big questions: What is education for? What relevance does it have to the lives of Bradford children, what is it preparing you for? In a world supposedly full of opportunity, why are some young people’s choices still so limited?

What I really liked about the play was the idea that either path – babies or books – has its difficulties. Should one choice exclude the other? The play highlights all those issues of self-esteem, confidence in your place in your community and the time-honoured prickly question of what makes you working class. Do you automatically move away from your roots and become less working class if you go to university? Do you have to change to fit in, or do you still fit in back at home? As someone with no children, the line “I can’t go to Grandma’s house and sit with my cousins talking about babies can I?” could have been written just for me.

The play was left at a turning point for both characters, with only a hint at what the future might hold. The lively conversation generated afterwards was a tribute to the themes explored and the open atmosphere in which the play was performed.

You can catch the last performance in Bradford of Brenda’s Got a Baby at Kala Sangam on 16 October before the play is taken to New York!

The Bloomin’ Buds Theatre Company was established five years ago to improve access to opportunity and the arts for people from lower and working class backgrounds. They run weekly sessions in community centres, events, workshops and performances in schools. More details here.

The Bradford Fringe Festival finishes its current run this weekend with a new play Visions of Bradford and closing party at the Underground on Saturday night. Organisers are sourcing new shows for next year’s Fringe. In the meantime, look out for their regular karaoke nights and monthly coaching sessions.

Review of The Discount Comedy Checkout at Bradford Film Fringe.