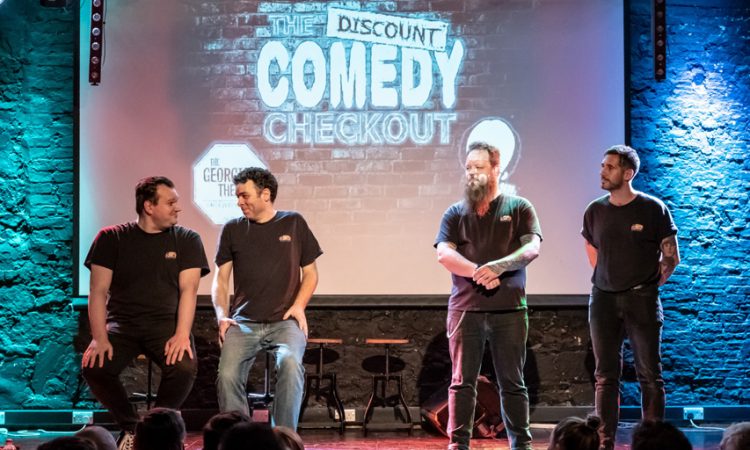 The Discount Comedy Checkout have been bringing their quick fire comedy to any situation an audience can throw at them for ten years. CATHERINE SIMES checks out the adults only show at the Bradford Fringe Festival.

If like me you grew up watching Whose Line Is It Anyway, Channel’s 4 must-watch improvisational comedy show in the 1990s, you’ll know just how skillful you have to be to be off the cuff funny.

The Discount Comedy Checkout graced the Bradford Fringe Festival last Saturday with two shows, one family version and one strictly for grown-ups. I saw the adult version.

The show is 100% improvised based on audience suggestions, both written down before the show to be secretly revealed and called out during the set. Any suggestions were taken. We were warned.

The three men, two women team were committed from the start to any games, themes or accents thrown at them – from a dubious range of French accents to a Scottish Little Mermaid crab.

But, the thing that really got me giggling was the group of women behind me having a full blown conversation over the top of the performers. Like proper Yorkshire grandmas, they made no attempt at whispering and I completely got the giggles. After that I was open to anything making me laugh.

With the women suitably and politely told to be quiet, the students in the front row kept the suggestions going and the performers clearly thoroughly enjoyed riffing off the audience’s increasing odd suggestions.

From the A-Z driving instructor, salmonella cooking show, and a “lets shop in Lidl” scene that morphed into a woke Princess Diana memorial, the group have the confidence and talent to run with any suggestion and create something proper funny. Definitely what is needed on a Saturday night out.

Established in 2007, the Discount Comedy Checkout regularly tours the UK and has a monthly show at the Fenton in Leeds. For more details check here.

The Bradford Fringe Festival’s current run ends on 7 September. But there’s still lots on in the last two weeks from karaoke, plays, a death café, cabaret, poetry and puns. Make sure you check out the programme. All shows are free or Pay As You Feel.

Edinburgh Fringe Preview at Theatre in the Mill.