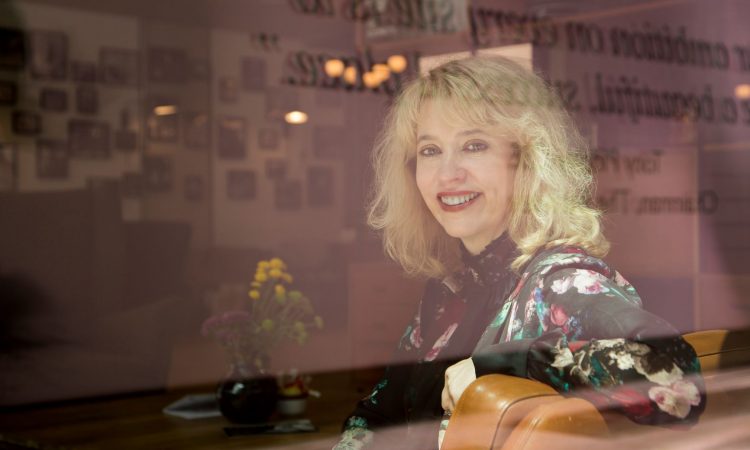 As her new film Out of Blue is released nationwide, director CAROL MORLEY talks to ANNA CALE about cosmology, challenging perceptions and the lack of complex film roles for women.

Carol Morley is a busy woman. She’s currently taking her new film Out of Blue on a nationwide tour with a series of audience Q&As, which she absolutely loves: “You get to meet people and feel it, feel the reaction all over the country, it’s brilliant.”

It’s also a chance to pick up on any regional variations and talk to people about their reaction: “You do want the film to survive on its own, I mean imagine if you had to go to every screening! But it’s quite nice when you’re launching it that you are there with it, it just feels really special.”

Out of Blue is a stylish, slightly unsettling mystery set in New Orleans which follows detective Mike Hoolihan (Patricia Clarkson) as she investigates the shooting of astrophysicist Jennifer Rockwell (Mamie Gummer) and explores cosmic secrets in her bid to uncover the truth.

Based on the 1997 book Night Train by Martin Amis, the idea for the film came from a conversation with producer Luc Roeg, who Morley worked with on The Falling. His father, the late director Nic Roeg, had always wanted to adapt it for the screen. Morley read it and was intrigued, “I was really pulled to the themes of cosmology and the female detective, and that was sort of my starting point really, of exploring the universe and the clues on the ground.”

Acknowledging that there aren’t many films that combine astrophysics and detective work, Morley was keen to explore the science of the subject, to tackle the big ideas, but in an accessible way, “You’re looking through Mike’s eyes at that part, the science and cosmology. I couldn’t believe the fact that we know more about the universe than we do our own minds.”

The film is has a feel of noir to it: Morley was always aware of the comparison. The distinctive palette of the film combines dominant blue with red, and there’s a reason for that. “I became obsessed with binary stars and this idea that Mike in her blue uniform, she’s like a blue star, and Jennifer’s like a red star and they were sort of connected to each other. Because binary stars exist for each other and then one has to give their life up for the other.”

There’s an unsettling feeling to it too, which Morley attributes to the lack of background artists in scenes where you might expect them, “I really wanted it to feel quite unpopulated. So often in a film you’ll see a ton of people in a café, which I always find quite distracting, but here there’s very little of that going on, so you get a real atmosphere of something’s not quite as it should be.”

We are constantly with Mike, seeing everything through her eyes. Along with the importance of sound and music, Morley refers to an “organic layering of elements” that makes the film work.

Patricia Clarkson gives a riveting performance in the lead role, “When you get someone of her calibre, you get goose bumps at times, you never want to call cut. You’re like, keep it going because something’s going on and you see it and you feel it.”

Clarkson was keen on the script straightaway, meeting up with Morley in Los Angeles within weeks to discuss the project, “I think we were supposed to meet for half an hour, but we spent about four hours together. She drank Bourbon, I drank Whiskey, and we just really bonded.”

Part of Clarkson’s immediate attraction was the general lack of interesting, complex roles usually on offer to her, “There’s been this thing where if a woman is in a film, she’s got to be some sort of role model or she’s got to be either really evil or really nice, and the shades in between are sort of lost.”

Out of Blue is different, “It’s about a 58-year-old woman, actually on the brink of something. I was interested in exploring that as well, with an older woman that’s still very vital and still learning about herself, about her future and her past.”

Morley’s films often focus on female-led stories; multifaceted stories, with a female gaze. There is a scene in Out of Blue where Clarkson says, “There are many ways to be a woman” and Morley’s films demonstrate that complexity, “It’s a natural extension of what I want to do, and I think that just makes it feel very right.”

“It’s offering up people who aren’t necessarily what we expect them to be. It’s really fun to be able to present people in a way that feels integral to who they are, but you realise people aren’t familiar with these people necessarily, with their representation in film.”

Her interest in the female gaze in film was there from the beginning of her own film education, as she read Laura Mulvey’s seminal 1975 text Visual Pleasure and Narrative Cinema. “It really was the first time I became aware of what the experience was for women, that we were seeing films and identifying with the male characters and we didn’t have a problem with that. We were used to shifting our position, and how in that article it really emerges that men haven’t had to do that.”

The industry is male dominated, so there has always been discomfort with identifying with a woman on screen. “The only way a male audience traditionally was comfortable with them was if they were looked at.”  With the character of Mike in Out of Blue, Morley had the chance to play with and challenge that perspective, “So a woman looking is still quite transgressive, a woman detective in a film who is leading us through a film is powerful and I was excited about doing that.”

Our conversation covers the next generation too, and our shared hopes for a sea-change in attitudes and ultimately the outcome. It’s right to constantly question those attitudes and the lack of representation, and that’s what her films do.

There is also a focus on creative collaboration in Morley’s filmmaking. She’s worked with producer Cairo Cannon and Production Designer Janey Levitt before, and appreciates the understanding that naturally occurs when they work together, “You have an idea and a way you want it to be as a director, and then they just take that and run with it, and generally improve it. You’re all working to this singular goal, to make a film that will connect to people and it’s just really exciting.”

Despite building an impressive portfolio across different genres, as an independent filmmaker Morley still faces a battle to get her films made. “I never want to make the same film again. I make films about things, about stories that I’m passionate about, and I want to choose the way to tell them. People feel safer if you do the same thing again.”

This also raises the issue of funding. Morley has had brilliant support from the BFI and the BBC, who are developing her next project, but she also needs to raise private finance and that can be tricky territory, “Those people are more interested in will they make their money back than “oh this is contributing to culture”, or “this is contributing to a conversation about women in cinema” and that then falls away. They want to know who’s in it, what their value is, and so it changes. You can be as idealistic as you can be, but there are the economics of the film world that can be quite restrictive.”

Challenging the audience through playing with perceptions of reality has been a recurring theme of Morley’s work. This is especially so with Out of Blue, where the audience are invited to be detectives themselves and come to an understanding of the film in their own way, “I’ve never ever wanted to iron out contradictions in stories because a story or an event if you like is full of contradictions, and that’s what makes it human.”

Being brave enough to leave that ambiguity on screen is something she is keen to continue, “What I like to do is present different aspects of the story and therefore it opens up the spaces for people to insert themselves, and that’s why I think it becomes ambiguous.”

Her next project, Typist Artist Pirate King, is equally ambitious as her previous work. Morley describes it as a “radical biopic” about Audrey Amiss, an artist from Sunderland who died just short of her 80th birthday in 2013. Amiss had attended the Royal Academy of Art but was diagnosed with schizophrenia in her final year. When her family cleared her flat, they found an extensive archive she’d built up over the years, including over 50,000 sketches, diaries and log books, which now sits in the Wellcome Library in London. Unlike Joyce Vincent in Dreams of a Life, Amiss left a record of her life and her thoughts, “It’s moving and funny and insightful. She clearly wanted to be heard.”

It’s another example of Morley’s passion for telling fascinating stories of complex women from a unique perspective, stories that might otherwise go unheard.