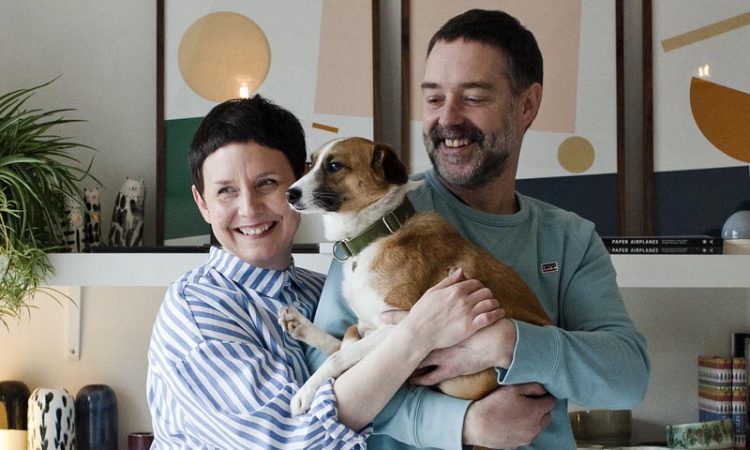 Transfert-Suspence-Hypnos, an exhibition of new paintings by ANDY VOTEL, opens at COLOURS MAY VARY later this week. Now in its seventh year, owners ANDY GRAY and BECKY PALFERY talk to NEIL MUDD about how the shop and gallery got from there to here…

Nestled in Munro House opposite Leeds bus station, Colours May Vary is one of the city’s hidden treasures, albeit one which has been hiding in plain sight these past seven years.

Writing for the culture vulture in 2012, Leanne Buchan described Colours May Vary as ‘a white box brought to life by strings of light, colourful journals and magazines, coffee table books, popular culture, interiors, art, design, film, photography and something to make you smile…’

On the surface little has changed in the intervening years. It remains today what Buchan wistfully dubbed then ‘a little adventure beyond the comfort and complacency of the city centre.’

Not that owners Andy Gray (an art librarian by trade) and Becky Palfery would necessarily subscribe to that. They are just not that into the High Street. “We’ve always been those people who look for design shops in a city first,” says Andy. “We’re not really interested in generica.”

Colours May Vary perfectly reflects its owners’ magpie sensibilities. Andy is nuts on typography, packaging design and Brutalism; Becky, a former jewellery designer, confesses to being a bit of a hoarder, something she ascribes to constantly moving as a child (“I was an RAF kid”).

“Cherry-picking is what we do,” she says. “In my old job I used to look at what other shops did and I got bored. We always felt there was something else that could be done with a shop to make it a destination and accessible.”

“All the shops I really liked were concept stores, but they always felt a little unwelcoming – a bit expensive, a bit exclusive. We didn’t want (Colours May Vary) to feel like that, but at the same time those stores did the best job of being something different.”

Andy says the shop’s name reflects the couple’s desire to keep things changeable, to put on exhibitions, book launches, talks and workshops. “When we talked about this early doors, we wanted it to be more than just a shop. There used to be other galleries like this – Soma in Bristol, Kemistry Gallery in London – and they were inspiring.”

“When we started Borders had closed, Habitat had closed, Muji had closed,” Andy says. “Even though they’re high street shops, we used to think they were important. Where am I going to get my import American music mags now Borders has closed? Where are we going to get our tableware now Habitat has shut or our pens now Muji is gone?”

“Or nicely chosen notebooks that aren’t bonkers expensive?” adds in Becky. The two of them feel the loss of Muji most it seems.

“There hasn’t been a great deal of really differentiated retail (since then),” says Andy. “All the entrepreneurial stuff has been in food and drink in Leeds. There was a wave that came through about the same time as us: Bundobust, Laynes, Friends of Ham.”

“Dave Olejnik at Laynes Espresso was hugely supportive throughout birthing of the business We have always felt bolstered by other independents and make a point of returning that support as we have grown. We make an effort to work with people we love and want to support, so that feeling is always mutual.

“Likewise we only really deal with design we love. We focus on graphic design, print, illustration and typography, subjects we are passionate and knowledgeable about, so we can really get behind them. We want to put on shows that we’d want to come to.”

From Friday and throughout February, Colours May Vary hosts an exhibition of paintings by Andrew Shallcross, (AKA Andy Votel) called Transfert-Suspence-Hypnos. [The title is from an obscure Italian horror film soundtrack by 70s prog-rockers, Libra.]

The artist himself was a key part of the equation. “He’s a mogul, a maven who attracts people to him and with good reason,” says Andy.

“We get asked all the time by good people who would just be wrong for the space,” says Becky. “Their work wouldn’t get the attention it deserved.”

“Whereas he is so right in a number of ways,” says Andy. “He’s a graphic designer. He’s drenched in popular culture. I was buying Twisted Nerve stuff right from those early singles by Badly Drawn Boy and Alfie and absolutely loving the covers. You can see in Andy’s own work that there’s a nostalgia to it, but it’s a very dark kind of nostalgia.”