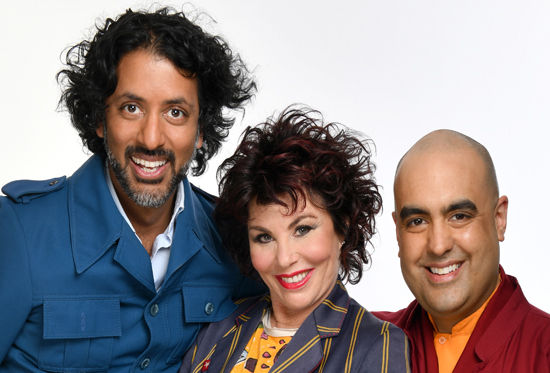 NATHALIE TOLMIE-THOMSON had a chat with RUBY WAX about brains, books and her new show HOW TO BE HUMAN at THE ALHAMBRA THEATRE, BRADFORD.

Ruby Wax is currently touring, but she has long since hung up her clown shoes and these days dons best-selling books, a neuroscientist… and a monk? I had the absolute honour to catch up with Ruby to find out all about her new show, based on her book How to Be Human.

“It’s a comedy show, [about] how our minds work and everybody wants to know that, and in the second act we have a neuroscientist and a monk who help you figure that out, you know ask the questions like, ‘why do we have negative thoughts? why do you pick the people you choose? why are we in such a state of rage, and envy, and comparison?’ So, all those kind of questions I answer but in the form of comedy.

“Everybody really loves it because it’s about the audience, because everyone likes to go ‘oh yeah I get it’ or [confirms] things they wanted to know. And they don’t feel so alone because we all have the same equipment…except it doesn’t work so well. Things happen that aren’t out fault and that’s pretty much it, so it gives a lot of hope”

This may have been the first example of comedy being used, that I’m aware of, to explain psychological principles, and most definitely the first that utilises a literal neuroscientist and a monk to provide a holistic approach. Definitely a lot of bang for your buck if (when) you come see this live.

If you’ve not read Ms. Wax’s book How to Be Human (yet) then you won’t be privy to the interesting way that it’s organised. She chops up all things brain-related into 12 manageable chapters which she introduces, adds a little insight from her own life and then closes interview-style with a discussion between herself, Ash Ranpura (neuroscientist) and Gelong Thubten (monk). It even has a dedicated chapter on mindfulness-based exercises, building on her previous two works Sane New World and A Mindfulness Guide for the Frazzled.

“I think I add the comedy, and then if you think I’m making this up (some of it I am for comedy reasons), you then have a neuroscientist who’s also funny who tells you when I’m right, when I’m wrong…he’s really an expert on what is going on in the nature that you are. Otherwise, we don’t know, to me self-help isn’t always substantiated.”

The format in which this book is written seems to me like it would translate quite gracefully onto the stage, especially with the added ambience of being in a particular location with bespoke content produced exclusively for the live audience thrown in. It sounds like we’re all in for quite a show.

I asked Ruby to elaborate on the use of humour to educate and she explained:

“It’s the only way I can do it, and it means it’s not a bore. It means people are already laughing, and then you put the information in. Because I like that combination…learning and laughing.”

On a stage it becomes a lot more apparent that although Ruby has left behind her previous incarnation as a stand-up comedian behind (to be a number 1 bestselling author, mind you) it doesn’t hold her back from incorporating something she’s clearly good at into something fundamentally interesting to her.

In preparing for this interview I searched for this book in Waterstones I found it amusing that in Leeds it’s shelved under ‘Self-help’ and in Bradford it’s shelved under ‘Psychology’. Really it needs its own self-help-turned-psychology-turned-comedy shelf, or at least a nook. When I mentioned this to Ruby she retorted with a, “Yeah, I mean…it doesn’t matter as long as they sell it!”

What I like about Ruby’s writing, and I should mention that I’ve been of fan of her books for years now, is just how accessible the language is, using that clever comedy-science-mindfulness combo, and I wondered if me being a young-ish woman had something to do with it?

“I think there are a lot of kids that think ‘I don’t know what she did in the 90’s but I love her book…I think [my audience is] quite young, [but also] older. Gay, straight. It’s pretty eclectic when you walk in there (on stage) so it’s kind of flattering because it’s ageless, which is nice. And that’s something I’m aiming for…”

I asked Ruby if she was trying to reach everyone with her ideas and understanding about the brain, mental health and well-being, considering that there are numerous differing interpretations depending on the culture you’re born into.

“I couldn’t say what goes on in Africa, but you know you have to stick with your speciality, this (her work) is just in the West. It’s a whole different thing but I don’t really talk about mental health, I’m talking about how your brain works and that’s international. The book isn’t about mental health and how we deal with it, and stigmas, that’s not what it’s about it…really it’s about how you think which I think is the most interesting game on earth.”

We had an interesting contrast in views here because Ruby and I both have master’s degrees in psychology-oriented subjects, hers in mindfulness-based cognitive therapy, and mine in the psychology of mental health. Therefore, her focus is very much on getting to the bones of what happens when we think and feel, and what mindfulness actually looks like on a neurological level, whereas my training has been almost the opposite, in that clinically-speaking we work malady-backwards, so understanding the mind by getting to grips with the effects of mental ill-health.

From Ruby’s view, she very much sees mental health in-line with physical health in that you can either have it or not, but when talking from that perspective you have to be specific, or at least try to be.

Bringing the conversation to a close I probe Ruby for her view on what was likely to be the future for our brains, evolutionarily speaking:

“If we wanna be able to navigate technology we’re going to have to use a different part of our brain so we know not to get addicted, but that I want to look into it. But it’ll have to come from us, because technology is going to accelerate so it’s no good just going ‘oh well it’s a disgrace’, we’re going to have to do something. Not a bad thing, just training your brain to know when to shut down.”

How to Be Human is at the Alhambra Bradford on 14th November. I recommend you get your tickets quick before I buy them all for my brain-nerd friends!