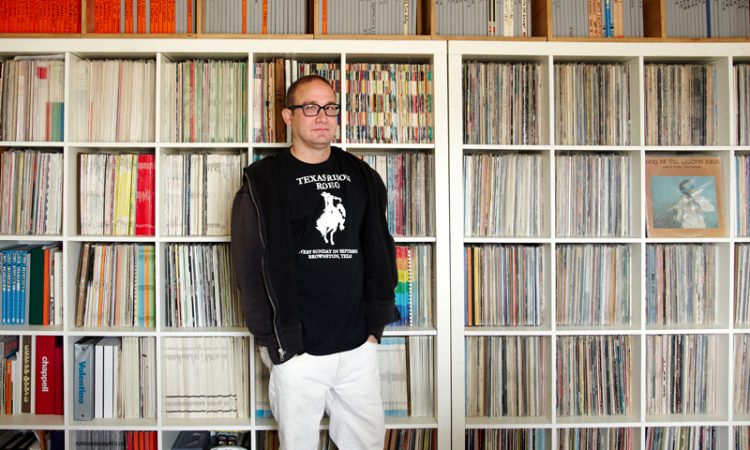 So few books have been written about the twilight world of library music – the stock cues and underscores for film and television so beloved of collector obsessives and DJs – that any newly published account affords some fresh insight or other.

David Hollander’s meticulous and beautifully illustrated Unusual Sounds: the Hidden History of Library Music looks to pick up where Jonny Trunk’s The Music Library left off.

That Mr Trunk’s book has been the definitive word on the subject since it first appeared in 2005 should not deter anyone.

‘Much remains opaque about these eccentric records,’ Hollander states at the outset of Unusual Sounds, a heavyweight primer on library music that is thankfully none too heavy.

Wanting to extend library music’s currency beyond ‘the hermetic world of record collectors’ is a worthy ambition. Whether Hollander manages it, given the book’s serious price-tag, remains to be seen, but Unusual Sounds is a work of art.

The book interweaves the histories of noteworthy labels alongside candid recollections from key industry figures like Romano di Bari, Janko Nilovic and Gerhard Narholz, with more than a generous helping of the genre’s grooviest, most highly covetable album sleeves.

Written in a breezy, light-touch prose, those seeking a more scholarly incursion are apt to be disappointed, but for most readers, Hollander sheds enough light on this puzzling sepulchral universe to excuse his occasional vaguery.

The author’s credentials are twenty plus years of crate digging and a genuine love for the music, rather than academic; for him, library is a ‘utilitarian’ commodity, at once joyous, experimental and ‘obscure.’

Some may be a bit sniffy towards an American writing about what is, after all, a British innovation. This would be to stupidly ignore the Stateside impulses of some of library music’s funkiest and best-loved exemplars.

And, is it even necessary to point out that all of legendary library composer Alan Hawkshaw’s musical inspirations happen to be American jazz pianists?

As indeed were horror film maestro George A Romero’s, who gifts Unusual Sounds its rip-roaringly wayward, yet completely apposite introduction: ‘Music is the perfect art-form,’ he informs us. ‘When we hear it, we rarely register that it has a purpose.’

He should know. Besieged by budget difficulties during post-production on Night of the Living Dead, Romero had to rely explicitly on library music to soundtrack his film. Who knew? Not me, for sure.

Given more generous budgets, Romero instinctively turned to British library music: many of the cues in his most enduring work, Dawn of the Dead, come from Simon Park’s Sun High release for Music de Wolfe; The Gonk, which famously plays as the credits roll, was written by Herbert Chappell himself.

What all this actually means for the future of library music is not entirely clear. Hollander strikes a note of caution. His regular pilgrimages to the vaults of the great European music libraries indicate that for every KPM, fully aware of its importance and carefully conserving and digitising its back-catalogue, there are many more like Peer International who have destroyed their master tapes.

Unusual Sounds is predicated on something of a paradox: the sample-based music which has helped reinvigorate interest in library music is viewed with suspicion by the companies responsible for it in the first place; DJ culture has championed some of the twentieth century’s finest unsung composers, musicians and engineers, but has largely done so without much in the way of thanks.

Every book like Hollander’s at least implies there is an audience and therefore hope; with every ‘lost gem’ recovered, a more persistent narrative emerges. This music may well be strange and unusual compared to the stuff on our iPods, but given its universality, isn’t library music the only true soundtrack of our lives?

A 20 track compilation to accompany the book is available via Bandcamp.

More on theCV: Shawn Lee on The Library Music Film |Oliver Lomax on The Mood Modern