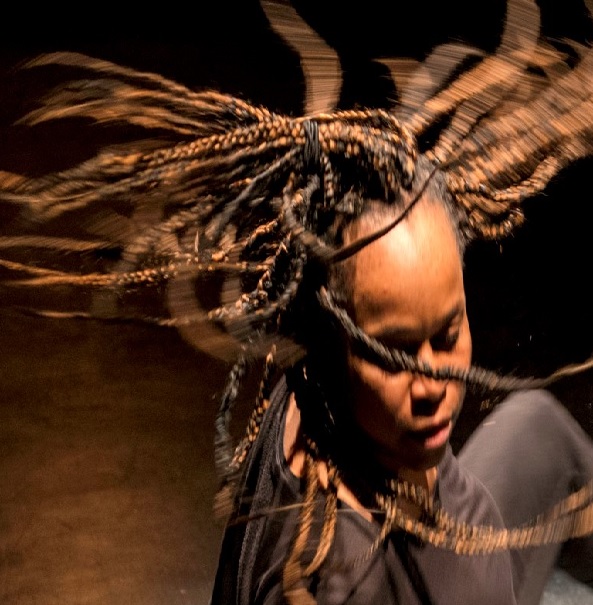 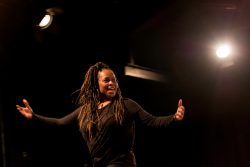 I am talking to Pauline Mayers during a break in rehearsals for a tour that will take in several venues across the North of England at which she will be asking audiences: What if I told you?

My expectation, I explain is that ‘What if I told you?’ is going to be about revealing long held secrets that will potentially change how people see each other, a bit like I saw in Gypsy Queen  a month ago. That or, something a bit like the training course I once attended at work. The trainer started by asking us to tell the group of colleagues something that they would not know about us from our appearance. It was a request that left us all feeling very vulnerable, and in search of a non-career limiting piece of trivial information to share.

You see, as Pauline explains, when we are asked to break out of the stereotypes that our increasingly visual and codified world is defined by, we do get uncomfortable. And, it works both ways. Just as it is quite challenging if not daunting when someone asks us to share stereotype busting information about ourselves we are also happier when other people fulfil our expectations of what they should be like. It’s as if we willingly block out information about them that contradicts our stereotypical perception of them, which is often based simply on the visual messages that we receive.

Pauline has been involved in the performing arts since her early teens and despite the feast or famine nature of the career she has been successful. But, she expands that success has always been influenced by the views of others. “Success,” she says, “can be deceptive”. What appears to be successful to someone who is ‘looking in’ so to speak can be an empty experience for the person ‘looking out’, living that perceived success.

That was the situation that Pauline found herself in. She realised that what she would be able to achieve was not going to be determined simply by her talents or her hard work, but instead by what other people thought someone like her should be doing, or could achieve.

In some ways, it is the unconscious biases that we all have but are unware of which influence the decisions that we make about other people or indeed what we say to them. As a woman of colour in a white controlled dance world the messages that world gave Pauline was that only white girls do classical ballet. It is a stereotype that is challenged by the existence of ballet companies like the Dance Theatre of Harlem.

There are all sorts of stereotypes associated with black women. A black mother will be stricter than a white mother, for example, but a single black woman will be hyper sexualised. This is something that black men also report experiencing. In her book Manhood: Every Penis tells a story, Laura Dodsworth reported that black men told her that they were very aware of the sexual image of black men. The penis size thing.

Some, she told the Guardian, use this stereotype to their advantage, but afterwards experienced negative emotions about themselves, saying that they felt like they were just ‘someone’s Mandingo fantasy.’

I suppose that if we stopped and thought about it we could all come up with a list of the groups that we hold membership cards for, which we did not chose to belong to. But what if you don’t have to stop and think? What if you are constantly reminded that you are a member of a group that is just excluded, simply for being visually different?

People who don’t fit with what someone in a role are supposed to be like are often airbrushed out of information about what is happening and being achieved. Before the release of the Hidden Figures film about the contribution made by African American female scientists to the United States exploration of space in the 1960s you would not be blamed for thinking that all the scientists involved were white Anglo Saxon Protestant men.

Yet still the replacement for Patrick Moore as presenter of the Sky at Night TV show was a black female scientist Margaret Ebunoluwa “Maggie” Aderin-Pocock, MBE. So, things must be changing, if it were not for rumours that when she turned up to speak at a major scientific conference Aderin-Pocock was mistaken for the cleaner. In much the same way rival politicians have supposedly said that the only way Diane Abbott the shadow Home Secretary will get into the Home Office is as a cleaner.

The frustration in Pauline’s voice is clear when she explains that for many non-white people the preferred response to this sort of racism is to keep your head down and carry-on. Perhaps because when someone puts their head above the barricade and draws attention to the issue they are told that they are themselves racist, like the singer Jamelia when she commented on the difficulties of finding a black doll for her daughter.

The list of incidents is endless. The difference between the way non white and white passengers are treated by an airline. Even one of the wealthiest people in the world Oprah Winfrey is not immune.

I confess to Pauline that I know what she means, not because I have behaved in the way that she has been describing, but because as a white business professional with experience of working in Africa and Asia I have experienced the same sort of thing but in reverse.

I have been the only white person in a room and experienced how people look to me to take control of the discussion. I have been in the back of cars when that car approached a security gate and had the vehicle waved through when the security guard realised that there was a white person in the car.

Regardless of where you are in the world. Pauline and I agree that, white people are perceived to be more important, more powerful and wealthier. I feel I have let down a lot of people for not living up to the expectations that my skin colour created.

Pauline believes that racism can be traced back to the period in history of European colonialism when a view of white supremacy, the white man’s burden, emerged based on the work of Johann Friedrich Blumenbach who ranked the five races of the world. It was a part of the philosophy that was used to justified the North American slave trade.

I can see the point that Pauline is making, but we must not forget, I remind her, that slavery existed long before the colonialization of North America, and that there is evidence that some parts of African society at the time, were complicit in the slave trade. However, I cannot dispute that much of the discrimination and inequality that afflicts the world, in the 21st century seems to have its roots in European imperialism of the 19th Century.

Pauline and I are just having a conversation about ‘What if I told you?’ but I can feel my nerves being touched as I relate her description to my own experiences of being the only white man in the room. I ask if this is the sort of response that audience members have to her performance?

There is passion in the way Pauline is talking, but this is tempered by a logic that stops the conversation getting emotional. “The subject is for many people, regardless of their race highly charged,” says Pauline, “All too often people avoid discussing race for fear of being described as a racist. Yet, if we are to resolve the issues of classifying people by race we, all, have to be able to talk openly about those issues.”

The impact is different for everyone, it all depends on the experience that the person has had prior to being in the audience. People of colour may say that what they have seen represents what they have experienced. But there is no set rule about how ‘What if I told you?’ impacts people. The important thing is that it opens the doors for people to have a response if they want to.

Our conversation is taking place a couple of days after the Manchester Arena terrorist murders. So, perhaps like many people I am still trying to process what has happened and to understand why?

Listening to Pauline I can see what might be a reason for why we have become so disconnected from our origins as one human family. Although Pauline does explain that there is probably one natural difference between people that is influenced simply by where they live I am struck by the realisation that collectively we seem to have a growing need to give everyone else a label based on their skin colour, nationality, religion, gender, sexuality, wealth, etc. Is it that we are striving for a way to make it easier to judge people, usually negatively, so that we can declare ourselves to be superior?  It seems a long way from the dream that Dr Martin Luther King had for us all.

Superiority may, as the world becomes increasingly globalised be an increasingly obsolete concept. To be successful a globalised world will as Shasi Tharoor MP chairman of India’s parliamentary committee on foreign affairs told the 2017 Horasis Global Meeting in Portugal, have to stop looking for ways to justify our superior view of ourselves and start identifying our shared values and goals as these are what will bring us together, not our artificial boundaries and labels.

If talking about ‘What if I told you?’ is this thought provoking I can only imagine what the actual performance is going to be like. I am assured by Pauline that the performance includes an opportunity for the audience to unpick their reaction to what they are feeling in a constructive way. It seems like what Pauline tells me started out as an examination of her own life experience, has evolved into something that gives power back to people to ignore the crowd thinking and think beyond the obvious, to focus on the possible, and redefine the way in which they decide how to interact with other people.

You can see What if I Told you at