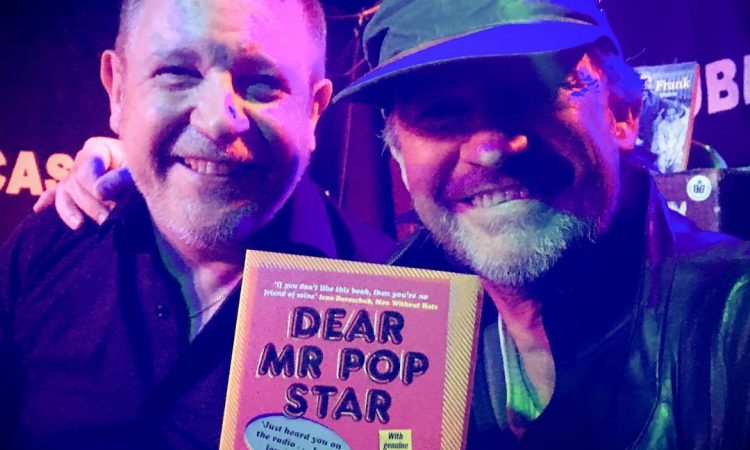 People used to write to pop stars all the time. DAVID PHILPOTT, co-author of Dear Mr Pop Star, tells NEIL MUDD about what happens when they actually write back…

Like a sardonic Letters of Note Derek and David Philpott’s Dear Mr Pop Star is as gobsmackingly funny as its origins are unorthodox.

“It was that dead time at the wedding when nothing’s happening,” recalls David of the night in 2008 when his father Derek, a retired proof reader, and his friend Wilf, began to pull apart the lyrics of songs being played by the DJ.

Why in heaven’s name would a pop star be residing within a cardboard box, given that the job is notoriously well-paid?

“Most old people probably do that, but it’s just in that moment we got it,” says David, who began to copy down his father’s literal takes on song lyrics or choices of band name, and to send them as ‘old-fashioned’ letters to the stars themselves; letters so hilariously, wilfully obtuse as to beg a response.

Undeterred the Philpotts joined Facebook and began to upload their eccentric scribblings to the internet.

Dear Doctor from Doctor and The Medics, Your ‘band handle’ is difficult to fathom by dint of its puzzling estrangement between a doctor, who is a medic, and other identical practitioners, who are also medics… Yours Derek Philpott

What started out as a series of epistolary wind-ups created for their own amusement became a word of mouth success – news spread to the artists themselves, often via members of their entourage.

Then in 2010, the unimaginable occurred: a pop star wrote back.

Julianne Regan, formerly of the band All About Eve, gamely set about deconstructing the perverse flaws in Philpott Senior’s illogical logic. Word got back to David that other pop stars were eager to play, and a regular correspondence followed.

Dear Mr Philpott, Thank you for your very direct and not uncritical letter about the apparent factual inconsistencies in my band name. It can’t have been easy being that open and honest to someone who is, after all, a total stranger to you… Love & Peace, Duck Tour

In 2015, following a vigorous Kickstarter campaign, Dear Mr Kershaw collated around one-hundred of Derek’s letters, complete with exasperated replies from the likes of Jake Burns, Neil Hannon and Nik Kershaw.

Three years on, with a new collection timed nicely for Christmas, David tells me. “I don’t know how we got away with it to be honest, but I suppose since we put the first one out three years ago, the artists knew they were in safe hands.”

Dear Mr Noone from Herman’s Hermits, Re: ‘No Milk Today,’ It is imperative that you anchorites really do keep your strength up. By cancelling your order you are doing your metabolism no good at all, Sir. Suspecting that you are now having to skip a healthy cereal, something tells me you will be ‘into something less good’, such as a cholesterol raising fry-up… Yours, D. Philpott

There is something very English about the humour in Dear Mr Pop Star. I ask if he and his father enjoyed sit-coms together when he was growing up?

“My Dad’s a big Brentford fan, so he’d have been out at the football,” he says, “but when we did watch television it was stuff like Dad’s Army, Are You Being Served? and Some Mothers Do ‘Ave ‘Em. That’s all I can think of. Just the standard stuff that was on in the seventies.”

Dear Derek, I am afraid you have misunderstood. My love, at least first thing in the morning, is tea, and as I’d run out of Tetley bags and couldn’t get down to the shops for a bit I thought I’d save a few pence and skip a day, settling for a black coffee and some Marmite on toast instead. … You have to remember, I once sang  I’m Henry the 8th I am, I am… but I didn’t mean it… Peter Noone

In the book’s Acknowledgements, there is a tip of the hat to Viz Comic, the scabrous Geordie cousin of The Beano. “I think that was subconscious,” David says. “I didn’t realise what a big influence they were until I was reading the thing back.”

“And Viz are really good mates of ours as well,” he adds, apropos of absolutely nothing. Turns out David is an incorrigible name-dropper, not that it detracts from the pleasure of talking with him. Like the book, he is good-natured fun.

“We wanted to keep this quintessentially English thing where English people aren’t really rude, so we are politely goading, you know. People compare us to Henry Root [the creation of satirist William Donaldson who penned hoax letters to public figures], but I read Henry Root, and he’s quite vicious and you don’t like the guy. With us, we’re just gently prodding.”

Dear Spandau Ballet, I was shocked to hear that you had bought a ticket to the world and have now come back again. I am afraid that you may have been ‘ripped off’, as merely existing on this planet is free of charge. Perhaps you should contact TV’s  ‘Watchdog’ so that this unscrupulous travel agent cannot target any other ‘New Romantic’ pop combos…

Another comparison which comes up is Justin Halpern’s acidic Shit My Dad Says. When interviewers have mentioned it in the past, David has always said he’s never heard of it, but I ask if he’s ever been curious to take a peek?

“No, and do you know why? This may seem like a silly answer, but Tori Amos was once asked why she never listened to Kate Bush – because she was always being compared to Kate Bush – and she said, I don’t want to be tainted by it. And that’s the honest answer: if I read it I’m probably going to be start picking stuff out of it and not be able to continue anymore.”

“I think the closest comparison to us, apart from with Viz, is Delete This at Your Peril… It’s a masterpiece. This guy Neil Forsyth replies to email scammers with increasingly silly demands and never quite gives them the details they’re after. It’s amazing. He just very politely strings these people along.”

The nature of the relationship is different though, I suggest. Everybody is in on the joke, which is interesting. “All the pop stars are primed. We write to them and say, this is what we do. A lot of them knew about us anyway, as it’s grown exponentially. Owen Paul was at our book launch last week and he said to us, Had you been a couple of journalists we’d have smelt you.”

“The whole beauty of the thing is the less my Dad knows about pop music, the funnier it’s going to be. I think it’s the naivety of it that’s the appeal. The fact he’s got no knowledge means he can look at it naturally in a way you and I couldn’t because we’re such massive fans of music.”

The breadth of Dear Mr Pop Star‘s celebrity inventory is staggering: Hazell Dean rubs shoulder-pads with Devo’s Gerald Cazale, for example. Has the pressure to find new material changed his relationship with the music itself, however?

“Because I’ve been ingrained in this thing for the past ten years now, I can’t listen to anything, whether it’s in Waitrose or in the car, without ripping it to bits. It’s absolutely changed the way I listen to music.”

One of the genuine pleasures of Dear Mr Pop Star is how former household names come to be seen afresh. One of the book’s standout responses comes from singer Carol Decker of T’pau.

“I was amazed we got her. She’s friends with Nik [Kershaw] and she was on tour with him at the time. How can I put this? I had a different public perception of her before she came back with that reply. It’s one of the funniest things we’ll ever have.”

Dear Derek Philpott, I recently found your letter. It had got lost in the substantial fan mail I still receive along with requests for my underwear and invitations to fans’ wedding anniversaries … I have no idea why you would think this classic power ballad was about aggressive monstrous crockery when it is in fact about the other monster and literary giant, namely Frankenstein. I also hope that you are in no way making any kind of ‘cheese’ connection with my profound lyrics and artistry. Affronted, Carol Decker

“It does change your perception. Because we’ve gone through the backdoor, via hairdressers and tour bus drivers, we haven’t seen that side of things much. When we did go through management in the early days, we’d get no response and you’d come away thinking, Oh that pop star’s a bit aloof, when really it’s the manager.”

“With this, everybody wins. The readers love the fact that they can hold their artists in a little more adulation because they now know they are decent people. It’s funny. It’s entertaining. It’s just a good laugh.”

Like the first book, Dear Mr Pop Star is published independently, this time via Unbound, which seems an interesting choice to have made. “We could have gone with a major publisher,” David says, “but I think we’d have lost something if we had gone big: the beauty and naivety of it and the thing that we can connect with the fan base… We might have lost that.”

Dear Mr Pop Star is genuinely comic, and at over four-hundred pages carries more heft than those criminally tiresome Enid Blyton spoofs no one will thank you for on Christmas Day. It started at a wedding, but truly it is the gift that keeps on giving.

Dear The Scissor Sisters, and Eddie Grant. Well don’t then!

Unbound is sold out of physical copies, David tells us. Try these handy links instead….