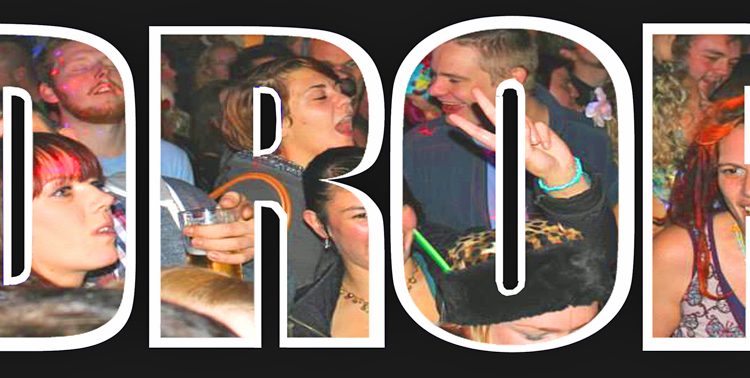 After twenty-five years away from his home city language teaching, novelist JOHN LAKE moved back to Leeds. There he decided to set up a club night. As you do..!

In 2014, I moved back to Leeds, close to my brother and his wife. We would often talk and drink into the night in their kitchen, taking turns to queue up tunes on Spotify. We liked to dance; we were all in our fifties and it was good exercise.

We were going to places like Subdub and Canal Mills with my sister-in-law’s daughter and her mates. Back in the Kitchen Disco one night, someone said, ‘Why don’t we become DJs?’

Our first night at The Primrose pub on Meanwood Road was in October and we called it DROP, after a mate’s T-shirt that said WAIT FOR THE DROP [It’s an EDM thing apparently – Helpful Ed]. I wore it on the opening night. The live act that night was A Man About A Dog and they pulled in a great crowd.

Our philosophy is simple: there’s no age limit on having fun and loving music. And DROP-goers, from teenagers to grandparents, have gone along with that. We pride ourselves on great sound and lighting, and it’s won us praise from people we respect.

Some of the great acts which have included Down Radio, Hayashi, After Hours, Soul Circle, Ajah UK, China Shop Bull, SilverFinger Singh, Pat Fulgoni… The rapper Lence says we have given a home to the Leeds hip-hop community, and our dance tent is a regular attraction at the annual Hyde Park Unity Day festival. DROP can also be found at Beaver Works nights such as Boombox Circus.

But monthly nights at The Primrose also continue. The ‘Primmy’ has a respectable history as a music venue: Corinne Bailey Rae played there and actor Sam Riley when he fronted a Leeds band before playing Ian Curtis on the big screen. But, like all pubs, nowadays, it struggles and every punter we pull through the door helps to keep it going.

If you love rap, funk, glitch hop, grime, dubstep, liquid house or junglistic drum n bass, then DROP is for you. Come down and dance; be entertained; bring your friends and make new ones.

DROP are on their summer hols, but restart at The Primrose, Meanwood Road on Friday 27 September (FREE before 8.00 pm, £3 afterwards).

In the meantime, they’ll be putting on their annual marquee at Hyde Park Unity Day (date TBA) with Pat Fulgoni, D3, SilverFinger Singh, Seedie B and Obi Joe & Andrew 300 plus the DROP DJs.

Interview with John Lake and Mick McCann of Armley Press.