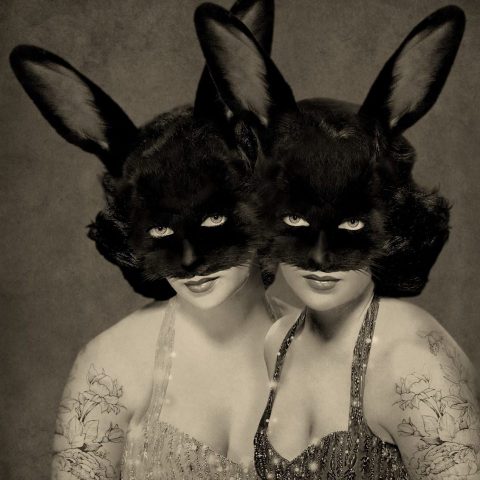 ELEANOR CARA CHURCHILL and AERIS HOULIHAN are the duo behind the loud and enigmatic music of Chambers, a band that’s not afraid to stir up a hornet’s nest. Eleanor spoke to CV’s SAL WILCOX ahead of their appearance at Hull’s Substance Live.

Your performances as Chambers always make a statement – both sonically and visually. Can you describe your act for readers who have yet to experience your personal brand of chaos?

ELEANOR (ECC) | Well, we never really knew how to describe our band, so we came up with our own concept called ‘Sister Doom’.  Aeris and I are really close. We’re very sisterly as a band and as friends. The doom part comes from being quite a dark, gloomy band.  It just stuck and it made describing our sound and persona a lot easier.

We’re very loud and our music is raw. We’re a female two-piece, which people always find unusual, especially with how loud and aggressive we are. People don’t really expect it from two girls. We do have songs about love, but we also write about horror and mystery, and the anticipation of the unknown, so there’s a load of different things going on in our music.

How does the average gig-goer respond to your music?

(ECC) | To be honest when I’m playing the drums, I’m so concentrated on what I’m doing and  there’s so much hair in my face that I can’t see the crowd. When I do actually look up, I’ve noticed that we shock people a bit. People don’t really expect to hear what they hear from us.  As the set goes on, people get more into it and have a bit of a dance

Aeris enjoys freaking people out a bit. She’ll pull scary facial expressions like she’s trying to hypnotise them and sway about like a weird horror film character. I think we both enjoy the shock factor and even I don’t know what Aeris is going to do half the time.

We played at Headrow House in Leeds once with a band called Black Honey. Their bassist or guitarist had brought a duvet with him on tour and Aeris went out the back, grabbed the duvet, swung it around her head and threw it into the crowd.

Which of your songs is your favourite?

(ECC) | For me, I think it’s got to be ‘Down the Rabbit Hole.‘ It’s really fast and punky and, as a drummer, it’s really fun to play. Aeris is really fond of ‘Amazonian Queen‘ because she really gets into it live. ‘Hostile‘ is one we both enjoy playing together because of the drum beat at the start.

You’ve just recently released a video for your track ‘Down the Rabbit Hole‘. It’s a vibrant and quirky piece. What was the inspiration behind it?

(ECC) | It’s got quite a few meanings. It was written at a time where I was very angry, and I wanted to reflect that in punky beat. I was seeing someone and I was frustrated. I was in a space where I didn’t really know what was happening with the relationship and I felt like I was spiralling down a rabbit hole. I didn’t know what was happening or where I was going and I just felt out of control in this relationship. The more I thought about it, the worse it got. It was ridiculous.

The video reflects mine and Aeris’ relationship though. We have ups and downs as a band. The different costume changes reflect how, as a society, we act differently in different situations. We change ourselves and our emotions, to fit in to different environments.

Earlier this month you supported Black Moth How was that experience?

(ECC) | It was great! We really loved playing with Black Moth, I know their bass player Dave quite well. Black Moth having been going for a really long time and have a good following, so it was nice to play to a bigger crowd too.

How are you feeling about performing at Substance Live? Have you got anything special – or scary – planned?

(ECC) | We’re really excited to play Substance Live. We haven’t got any special plans. I think we’re just going to treat it like a normal gig. We’ll be playing a few new tracks though, but we’re excited to play to a lot of people that haven’t heard us before. It’s a good opportunity for us because we’ll be able to show our music to people from around the country. We’re hoping that we can reach out to a whole new audience.

It’s really nice that we’re all female performers. I think it’s really important to promote female musicians and talent because the music industry is very male dominated. It’s cool that they haven’t overtly marketed the event as all female – we just all happen women. You wouldn’t bat an eyelid at an all male line-up, so it’s great that Substance Live is showcasing  a lot of talented women without focusing too much on gender.

You are actually based in Hull, so how do you think being made UK City of Culture 2017 has benefitted the city?

(ECC) | I actually work for the City of Culture team as a digital content producer.  At the start I think a lot of people didn’t really understand what the award was, but after all the amazing events that have been organised, I think that the community are so much more positive about it. There’s been a whole regeneration of Humber Street. It’s always so busy now and has a great buzz. I think it’s made people prouder of their city.

CHAMBERS perform at Substance Live: Future of the North on 9th December, part of Substance, ten days of music, art installations, performance and provocations for Hull 2017 from 29 November to 12 December 2017. Details here.