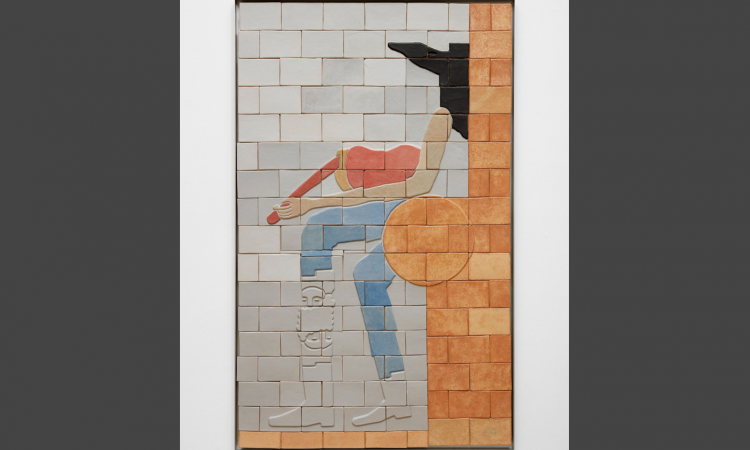 Bellarmines and Bootlegs at the Henry Moore Institute: So Good says Steve Keeling

Bellarmines and Bootlegs, a major exhibition of the work of the Hong Kong born, London based artist Renee So, opened this week at the Henry Moore Institute. The exhibition comes well recommended and features on a Crafts Council list of must see craft exhibitions in March.

The shows name comes from a decorated medieval wine and food vessel and the signature long boots that the artist frequently uses as a replacement for her characters heads. The historical reference is significant as Renee So’s work is influenced by her assiduous research into the histories of European and Assyrian sculpture This, along with an enthusiasm for theatre costume, cartoons, advertising design and popular souvenirs, results in a unique and appealing take on portraiture.

The artist works in a variety of media and the show features a series of portraits using wool in oak picture frames, ceramic busts (the bellarmines) and ceramic tiled portraits. I initially thought the wool portraits were paintings but closer inspection revealed they were actually textile. As with the ceramic busts these had a playful almost cartoon like character.

The ceramic bellarmines are the centrepiece of the exhibition. They are shaped as amusing exaggerated portraits often sporting luxurious beards and hairstyles and some of course have bootlegs instead of heads! The use of ceramics gives these pieces a metallic quality and a hard unyielding texture that contrasts with their playful nature.

I found the most beautiful of the works were the ceramic tiled portraits. The texture of these reminded me of late Victorian station maps (there’s one at Whitby) although apparently they were based on ancient Assyrians reliefs from the Ishtar Gate. I particularly liked the one of the man with a dog (or possibly a camel. It was hard to tell as both had boots for heads!)

It is hard to imagine more contrasting mediums than wool and ceramics. Displayed as they were in separate rooms it felt like two separate exhibitions for the price of none (admission is free)

The Henry Moore Institute was very busy with a group of students from Trent University’s Saturday art club. They seemed agreeably engaged and suitably armed with sketchbooks and notepads added to a lively Saturday afternoon atmosphere. I took my daughter along with me and we both thoroughly enjoyed our afternoon. The exhibition is on until the 2nd of June 2019. Go and see it!