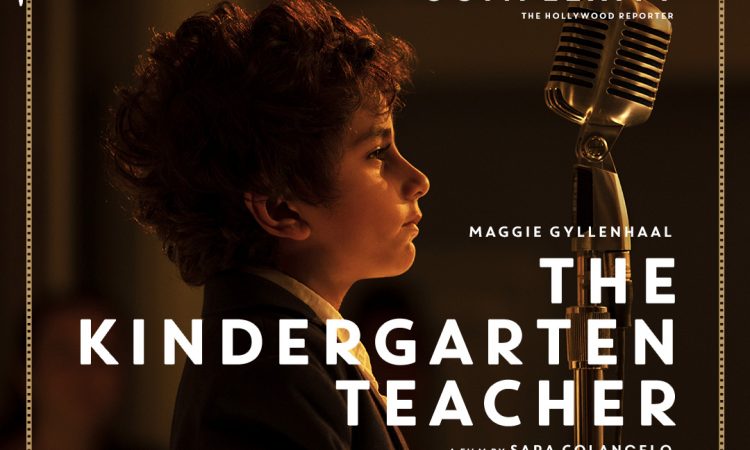 A thriller about poetry is a pretty strange combination, but MAGGIE GYLLENHAAL’s new film THE KINDERGARTEN TEACHER shows the two can create a force to be reckoned with, says LOUIS HELLEN.

The Kindergarten Teacher tells of Lisa Spinelli (Maggie Gyllenhaal) and her obsession with one of her students who she believes is a poet prodigy.

For most people, poetry and thrillers rarely go together, but director Sara Colangelo conjures a film that merges the two brilliantly. Poetry is the lynchpin which enables us to understand the Gyllenhaal’s character and motivations.

Gyllenhaal gives one of the performances of her career. Spinelli is a brave choice for the actress, a deeply complex and troubled character, she isn’t always likeable. Over the course of the film she makes a rash life changing and increasingly horrifying choices. That is entirely Colangelo’s point. This isn’t meant to be a happy film.

Opposite Gyllenhaal is five year old Jimmy played by Parker Sevak in his first acting credit. Jimmy is bright and has the gift of being able to string together poems better than most adults. Sevak gives a believable and genuinely charming performance way beyond his years.

A sturdy supporting cast includes Rosa Salazar as Jimmy’s babysitter Becca and Michael Chernus as Gyllenhaal’s husband, who can only watch in horror as their worlds fall apart.

The Kindergarten Teacher does have a plot twist, though not in the traditional sense. There isn’t a single point where the movie takes a swift turn, but rather a slow burning spiral that leads to increasingly drastic consequences.

Colangelo’s latest film is particularly relevant in the world today. As the arts receive less and less funding, particularly in the UK, the world Lisa describes is “a materialistic culture; it doesn’t support art, or language, or observation.”

When it comes, the climax of the film is expertly executed and undeniably bleak. It could easily have continued for at least another thirty minutes without looking amiss, but Colangelo ends it there and leaves the ‘What happens next?’ up to the audience.

A special screening of The Kindergarten Teacher will take place on 14th March in conjunction with the Birds’ Eye View‘s Reclaim The Frame campaign. Backed by the BFI, its mission is to bring audiences to films by women to offer a wider perspective of the world.

The special screening includes a post-film panel discussion hosted by Oscar-winning producer and founder of Birds’ Eye View, Mia Bays. She will be joined by director Deborah Haywood, alongside poet and filmmaker Be Manzini. There will also be a live performance from Manzini alongside poets Saju Ahmed and Enas Saeed.

The Kindergarten Teacher is at Hyde Park Picture House until 14th March. Click here for times, including more information about the #ReclaimTheFrame Special Screening.