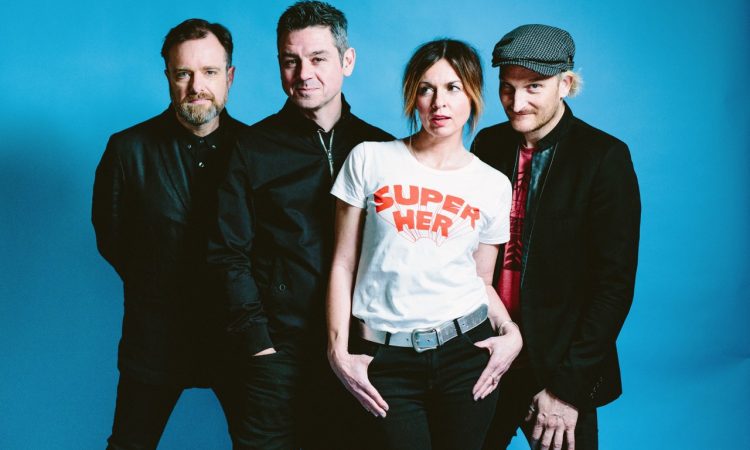 As Britpop alumni Sleeper release their first album in over 20 years, frontwoman LOUISE WENER talks to ANNA CALE about their return to the limelight.

In the summer of 1996, fresh from the triumph of my first year at university, I walked confidently into the hairdressers clutching a photo of Louise Wener and had a haircut just like my Britpop hero. I felt glorious. Of course, I mentioned none of this when I had the pleasure of chatting to her recently. Instead we talked about the band’s new album and tour, the art of songwriting, identity and empowerment.

AC: After many years away from the limelight, the band have recorded a new album and you’re going on tour. Why now?

LW: It was really a spur of the moment, impulse thing. We always said that we would never do it, that we would never play again. We’d get these emails every so often saying Reform. Come and do some gigs! and I think I’d got to the stage where I’d just erase the email and not even bother reading it. But in 2017 someone very close to me got ill, and I think part of my reaction to that was to do something that I thought would be life-affirming and out of my comfort zone. When I phoned up the rest of the band they were like, ‘Really? Are you serious? Are we going to do it?’ We were just going to do four gigs, just to see if we could actually do it. I just wanted to do something that scared me, you know?

AC: How does it feel to be back recording and performing together after so long?

LW: It’s been massively enjoyable. I think what I’ve loved most is getting back on stage, doing the gigs again. I’m re-learning how to write songs. I’m quite happy with words because I’ve been working with words ever since the band split up, but I wasn’t sure about writing a melody. Could I still do that? I love the record – I’m really proud of it – so that means an enormous amount to me. Playing together has been amazing.  We step out of our regular lives, like we’re looking through a looking-glass.

AC: Are you looking forward to being on tour again?

LW: I’m really excited about touring. It’s reconnecting with what we do, almost like stepping back in time. You walk out on stage and you do it and it’s so different from our day to day lives. And it’s a shared thing between you and the audience, so when you get that feedback from them it’s always really uplifting. It just feels lovely to get back into it. The whole band feel that. I think because we don’t worry about it so much anymore, we’re much less self-conscious than we were at the beginning. Those anxieties have gone. You’re not trying to prove anything, you just take it as you find it. It’s very liberating.

AC: I really enjoyed listening to the new album. It felt welcoming and positive, like seeing an old mate again after a few years. Does songwriting still bring you joy?

LW: Ha, I love that! Yes, it really does, and that’s something that I think I’ve missed. Songwriting happens quite fast. If you’re writing a novel, it’s 300 pages and thousands and thousands of words that you’ve wrestled with over the course of a year. But I just sat in my living room on my sofa with a guitar and wrote songs. I wrote the lyrics, then me and Andy got together, and he put the music onto it, and then you go and play it in a rehearsal room and the process was really fast.

AC: Your songs always felt like wonderful stories or character studies. How important has telling stories been in your songwriting, and has writing fiction influenced that?

LW: I think it has, maybe it’s just the way that I filter things. I think some people are brilliant at being raw and honest and putting all their feelings out there, which is a brilliant thing to do, but I feel I’m less good at doing that. I tend to filter through a character and storytelling. Hopefully there’s intense honesty in there, but I sort of misdirect it a little bit. That’s probably my technique.

AC: You’ve been exploring new worlds with this album.  Things have moved on, you’re older, you’ve all got other responsibilities, and I guess that must influence what you put in those lyrics?

LW: Yeah it does and I felt it had to be about subjects that were affecting me now, things that I was thinking about, things that had happened to us or to friends, what had happened around us. All the songs are about something, it couldn’t just be platitudes. I didn’t want it to be generic, each song had to have some focus. You want to communicate.

AC: You’ve also written about your experiences in the music business in the 1990s (In the book Just For One Day: Adventures in Britpop) was writing about it cathartic for you?

LW: It was. I waited quite a long time to do it. I think people had asked me to write a book at various times and I waited because I wanted to have a proper sense of humour about it. I wanted to look back on it with a sort of positive view, even though there’s lots of negatives in there.  I think I look on it with humour now and I think if I’d written it right afterwards it wouldn’t have been the same book. It would’ve been much more grumpy.

AC: Do you feel that as a band you’re more in control this time around?

LW: It’s a very different world now and a very different process that we’ve engaged in. We took our time with it. There was nobody telling us how it ought to be, all of the decisions were ours. I think that’s partly also to do with being a grown up now, it would’ve been strange to have to ask people. We’ve put it out on our own little label, but I’m not sure what that means anymore. You go and you make your record, and you put it out there. It can be put out almost immediately, and people to stream and listen to, and that’s quite interesting I think.

AC: A few years ago, you wrote a piece for The Guardian on motherhood. How does it feel now your children are older, has coming back into music felt like a return to you and your identity?

LW: It’s not that you lose your identity, you absorb another one and immerse yourself in that for a while, but then you come back out of that phase, and that’s ok I think. I went on to have a second child and you can sort of get overwhelmed by being in that world. It can feel claustrophobic at times and I think I appreciated that later on. But your identity is there, you just sort of shift subtly and then you come back around.

I think I’d put that bit of my identity completely away, I’d literally put it away in a box in the bottom drawer and forgotten about it so I didn’t know whether I could get back on stage and play guitar and sing in front of a very loud band. It felt impossible, which I think was why I did it. I thought there’s no way I could do that now and then you find you reconnect with it. You’re much less self-conscious than you are in your 20s, when you’re worrying too much about what people are thinking. This time it’s just like, am I enjoying it? That’s really the only question.

It’s empowering you know because I’m 52, so I feel that’s quite a cool thing to do. We talk about the invisibility of women as they go into their 50s so the idea of fronting a band now feels liberating. I think that’s kind of a part of my vibe, to break down those barriers a little bit, and who says I can’t do that?