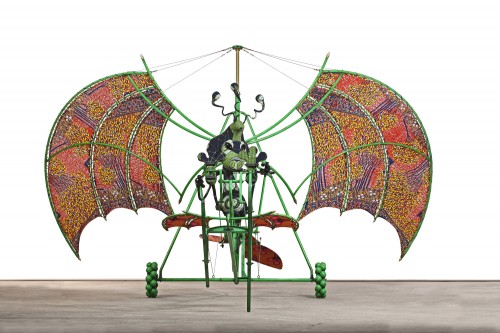 A childlike figure with a stuffed fox’s head, a golden replica of Gaddafi’s gun in one hand and a Blackberry in the other. A spaceman and ship wrapped in African fabrics adorned with images from African-American pop culture and politics. A ballerina, poised in a perfect pirouette atop a billowing mushroom cloud.

The political or sociological readings of these images barely need to be spelled out. And anyone coming to this exhibition with a rudimentary, google-gained knowledge of Yinka Shonibare (ahem) will be expecting these exact themes. Shonibare’s name is never more than a few breaths away from worthy long words like “post-colonialism”, “identity constructs”, “globalisation”.

But whilst these ideas are ever present in Shonibare’s work, it’s quickly evident that he’s not an artist driven by a need to teach, preach or edify. No – he is, we’re informed by curator Sarah Coulson in her excellent tour of the exhibition, a self-proclaimed aesthete. And, refreshingly for a body of work carrying all of this thematic weight, the almost cartoonish, garish beauty and fun of Shonibare’s sculpture is its most apparent quality.

We don’t first consider the significance of the aristocratic garments constructed from cheap cod-African fabrics – rather, we notice how ridiculous they appear on a pair of headless figures poised next to a cannon loaded with cloth ammunition. We look at the pile of brightly-coloured cannon balls in the corner of the room and smile at their cheerful absurdity. And only then, gently, are we led to perhaps consider any further meaning.

Before we ponder on any readings of gender, cultural identity, or “otherness” in an alien family invading another room of the gallery, we are seduced by their cuteness. Then we’re amused by the rudimentary flying machines they’re perched upon – bikes with extra added cogs and wings. Then, perhaps, we consider Shonibare’s intention in subverting our expectations of these alien invaders. Or perhaps, we don’t, and instead move on to the next room with promise of more visual exuberance in which to delight.

The beauty of Shonibare’s work is that it really doesn’t matter if we try to delve beyond its brightly printed batik surfaces. One gets the overriding impression that the artist simply doesn’t mind – he’s anything but a didactic artist.

On face value, the sculptures, photographs, paintings and films on show here are just as rewarding on the first glimpse as they are on close study. Intellectual themes of political and cultural satire and commentary, lie beneath all of the work, and the choice of how deeply to engage with them is entirely ours.

Fabric-ation is at the Yorkshire Sculpture Park until September 2013