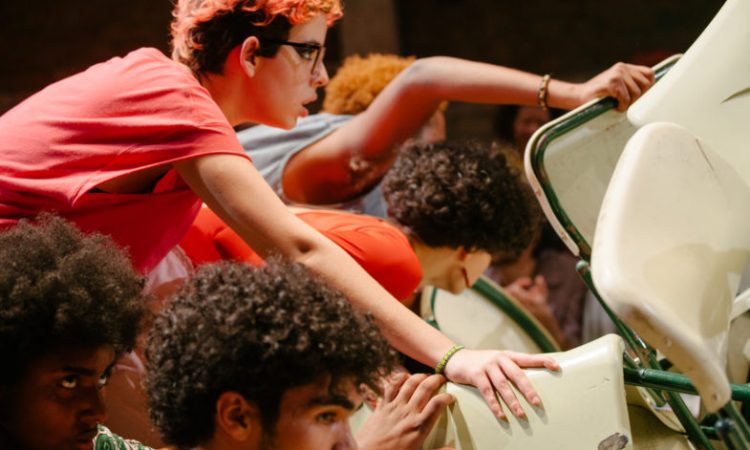 coletivA ocupaçã When it Breaks it Burns Transform Festival. A school of struggle.

coletivA ocupaçã’s, When it Breaks it Burns at Transform Festival, reviewed by LAURA AGER

São Paulo’s coletivA ocupaçã arrived in Leeds this week to present their new work When it Breaks it Burns as part of this year’s Transform Festival. Thursday’s performance at The Leonardo Building was its European premiere.

Brazilian kids aren’t alright. As a matter of fact they’re furious. When it Breaks it Burns is about as fierce and physical as a piece of activist theatre can get: part choreography, part theatre, part musical performance, but also joyous, muscular, and a little bit queer as well.

Transform festival is known for placing challenging international theatre in surprising venues around the city and the blurb for this one promised to get you up close to the action, what I hadn’t anticipated however was spending 90 minutes scooting around on my bum on a parquet floor avoiding a multicoloured carnival of Converse boots, hair and face paint. I usually comment on films for The Culture Vulture, which means that the closest thing I can relate it to is being in mass detention in a South American version of The Breakfast Club. Only with riot police lobbing tear gas into the refectory.

The performance refers to happenings in 2015, when a wave of high school occupations swept across the state of São Paulo. This was the moment when many of the country’s teenagers discovered at first hand what state brutality looked like. Creating and performing this play is one way that some of them have fought back. The Primavera Secundarista (Student Spring) saw over 200 schools go into occupation. High school students were furious about newly announced government reforms that would see many public schools in the region closed and thousands of students relocated to already overcrowded facilities, along with proposals to turn subjects such as sociology, philosophy and arts into ‘electives’ at secondary level and the hint of what has now become a real and dangerous crusade against ‘left-leaning teachers’.

Young people mobilised themselves in the collective social moment, rapidly learning skills of resistance. They took to the streets to protest against Geraldo Alckmin, the region’s right-wing state governor, who in retaliation authorised police to use tear gas and rubber bullets against students ‘armed’ with plastic chairs. Realising that street protests weren’t going to get them anywhere (Brazilians had already been protesting in the streets since 2013 in outrage over bus fare hikes, government corruption and the cost of next year’s football World Cup) some tenacious groups of students quickly occupied their schools.

The school is ours!

That this action is now touring in the form of a confrontational piece of activist theatre is down to the director / producer partnership of Martha Kiss Perrone and Lowri Evans, who have worked collaboratively in São Paulo before. They toured another performance, Roza (this one was based on the letters of Rosa Luxemburg) around some of the occupied high schools in 2015 and met student activists who became part of the show, who later formed their own theatre company coletivA ocupaçã.

When it Breaks it Burns was born out of the teenagers mixing their real life experiences with the culture of protest – banners, images, Facebook pages, video, dance, live music and performance. Now they’re using what they have made to further exert an influence on issues of public concern.

“One of the main characteristics of this work is the ability to occupy and adapt to any space. This time we cross the Atlantic, the imaginary lines, border control, border control, jump the wall.”

And it’s an exhilarating experience for audiences, with enormous praise for the piece appearing minutes after the show on Twitter. As Richard Horsman noted recently, with a nod to Transform, “audiences are no longer content to sit in dedicated spaces to experience performance”. It should also come as no surprise that coletivA ocupaçã invite audience participation: ‘can you give me a word about the occupation?’ They also tend to take your chair off you – this has a symbolic meaning too, students can be seen using their chairs as tools of protest in the documentary Lute como uma menina! (Fight like a girl)

Not all of the cast speak in English, so some of the dialogue has English subtitles projected onto a screen. But that doesn’t distract from the perpetual revolution of bodies, cries and chants and the music moves things along at a dizzying pace.

There’s one more chance to see this performance in Leeds (tonight) before it heads to Manchester’s Contact Theatre on Wednesday and Thursday next week.