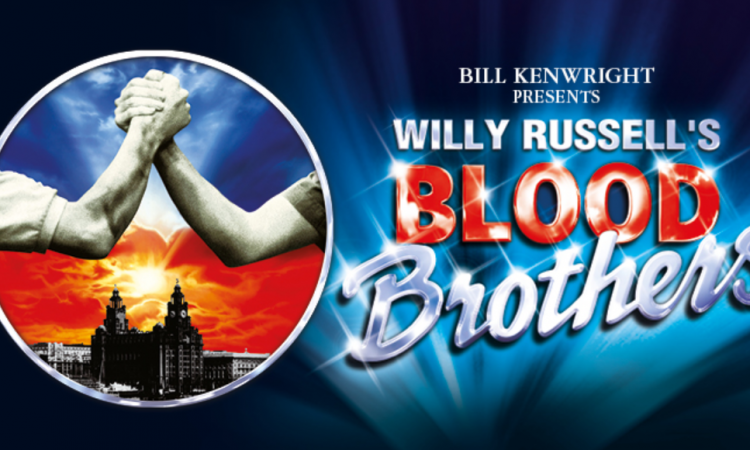 It’s PHIL KIRBY’S first time at Blood Brothers, and we think he rather enjoyed it!

One of my fellow reviewers whispered a threat of physical violence in The Grand Theatre last night if I even hinted at being rude about this production of Blood Brothers. Fortunately she can put away the baseball bat. I loved it.

It’s rare enough to see working class characters on stage, especially in a musical, but Bill Kenwright’s production of Willy Russell’s Blood Brothers does it with great empathy, understanding and charm. For me it was like being taken right back to my childhood – though with very different accents – where I was definitely on Mickey’s side of the tracks.

I left the show marvelling how times have changed since the ‘70 and early ‘80s. Kids played out in the streets. Kids went around in gangs, played goodies and baddies, cops and robbers, cowboys and Indians (the magic seems to have gone out of reenacting genocide these days). Kids played with guns, and knives, and catapults (can you even buy a toy gun or a catapult these days? They were available in any corner shop back then, and kids could buy pellets for their air rifles no questions asked. My best mate’s little brother had his left eye shot completely out by 12 year old in possession of a .22 rifle and a pocketful of slugs.)

Back then the local bobby felt free to give a kid a clip around the ear for being cheeky, and teachers could call a student a “boring little turd” in class (I had a chemistry teacher who had a splendidly inventive line of homophobic invective.)

The dole was a collective experience for a generation of people who left school back then. Casual criminality was accepted as simply how you got by, and we all had “knock off sofas”, petrol our dad siphoned from a neighbours car, and lecky directly plugged into a lamp post in the street. It was the time of the never never, catalogues and Green Shield Stamps. Repossession was common, and kids were taught to hide behind the settee and pretend nobody was home when there was a loud knock at the door. My mum actually made us practice this regularly, just ask my sister.

It was before colour TV and microwaves and Channel 4.

And, best of all, the council built houses. We all lived on estates back then. Affordable, decent, spacious social housing.

Willy Russell’s script manages to evoke the feel and colour and texture of the period gloriously. It’s also hugely funny. I could choose dozens of laugh out loud lines, but this is one of the best:

I know our Sammy burned the school down

If the teacher lets the silly gets

My favourite scene of the show, for entirely personal and random reasons, is where Edward is getting a dressing down from a teacher for “not behaving like a boy” in a boys school. He is wearing a locket. The teacher threatens to have Edward flogged if he doesn’t comply with the demand to conform to accepted gendered behaviour, and give up the locket. Edward refuses,

You can do exactly as you choose sir. You can take a flying fuck at a rolling doughnut! But you shall not take my locket!

Isn’t that perfect? The middle sentence is actually a quote from Kurt Vonnegut’s Slaughterhouse Five, a book any clever lad of 14 would have read over and over again at the time.

I audibly gasped when I heard the phrase – something I’ve not done in a theatre for ages – and may have even squealed in delight (my plus one could probably tell you.) It’s a phrase I once used during a confrontation with a bullying teacher at my all boys school when I was around the same age as Edward, and for a very similar reason. The teacher had called me a “mincing poofter” during a biology lesson when I’d objected that I’d really prefer not to kill a frog and perform a dissection on it’s brain. I was simply squeamish. And not really into murdering innocent amphibians. And I read books. Hence, obviously homosexual.

I got the cane. Six of the best, and then six more when I still refused to drill a hole in poor frogs head. Never did me no harm…

It was my first time at Blood Brothers, so I’ll leave the proper reviewing for my colleagues who are more knowledgeable, competent and trustworthy than I (they know who they are.) But If you haven’t been to Blood Brothers before, you really should, it’s a genuine treat. If you have, you will need no further encouragement from me to see it again.

It’s at Leeds Grand Theatre till the 17th of May. Get your tickets here.