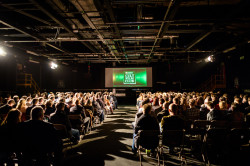 I’m standing in a queue. It’s a nice evening, there’s a sense of anticipation in the air and a lot of very sharp suits (and questionable facial hair) on display. Suddenly I hear some sort of commotion in front of me, the source of which quickly becomes apparent – actors. This is not a good situation for me; I instantly go into my most awkward and unappealing stance (not that much different to my normal one to be fair) and pray that we get into the building before someone tries to interact with me.

Today’s reason for my social awkwardness is a sneak-preview of Anchorman 2 at Prime Television Studios, courtesy of Jameson Cult Film Club. The whole event reminds me a lot of Sneaky Experience. The main difference between the two being that Sneaky Experience celebrates established cult classics like Top Gun and Ghostbusters, while Jameson showcases new films which the organisers believe have the capacity to become cult favourites in the future.

What both events share in common is entertainment based around the film being screened – for me this mean dodging actors for another night. I’ve said before that the fault for this aversion to audience interaction lies firmly with me and as the actors imitating the film’s leads emerge I’ve got to admit they all look and sound fantastic (extra credit to the two playing Champ Kind and Brick Tamland). Their interactions with various guests do actually seem funny and get them nicely warmed up for the screening. It’s just that, personally, I like to keep them at a respectable distance.

Once we enter the studios we’re greeted with even more Anchorman-themed activities and decoration. To my left there’s a giant wheel of cheese, on my right a telephone box for recreating your own ‘glass case of emotion’ scene and, more importantly, directly in front of me a very well-stocked bar. Topping all this off is a background soundtrack of ’70s and ’80s jazz and soul. It’s clear that the organisers know how to put on a solid event and in response everyone in attendance seems to be having a great time, drinks are flowing and quotes from the first film are flying thick and fast. We’re then moved into a screening room, led in a stirring rendition of Afternoon Delight (I’m five cocktails deep at this point so even my god-awful voice can be heard) and the film begins. 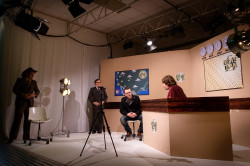 I think it’s fair to say that I always walk into sequels with a sense of trepidation, especially when it comes to comedy. There’s always the possibility that the finished product will ultimately be a rehash of the original, a simple exercise in moneymaking. In the run-up to Anchorman 2 what reassured me somewhat was the gap between the two films. The first Anchorman came out in 2004 and instead of a quick cash-in the year after fans have now been waiting 9 years for a follow-up. Clearly with an ensemble cast such as the one found in Anchorman 2 shooting schedules will play a major role in this but my hope was that part of the reason for the delay was to ensure that final product didn’t disappoint. Having now seen it I feel pretty confident in saying that the wait was worth it.

To be honest a lot of what made this film so enjoyable for me was the element of surprise, so in talking about here I’m going to try and spoil as little as possible. What I will say is that the key audience for this film is fans of the original. I imagine that newcomers will find plenty to enjoy but the number of references and call-backs to the first film mean that if you’re familiar with it the sequel will be considerably more satisfying.

Anchorman shifts the setting from the ’70s to the ’80s and sees Ron Burgandy falling from grace (again) and having to reassemble the news team and regain his place at the top of the news-reading world. It seems like the film was crafted around audience reaction to the original. Everything that was popular in the first film is included and taken to the next level (more Brick, more quotable lines and more social awkwardness from Ron). The film constantly moves from one joke to the next ensuring that if one joke falls flat the next is only a second away. Maybe it was the abundance of cocktails but I’ve never been in a screening where people have been laughing out loud through the entirety of a film and Anchorman 2 achieved this. 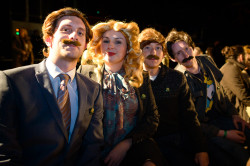 The downside to this writing approach is that the sheer volume of humour comes at the expense of story. Anchorman 2’s story is feather-light, everything Ron has learned in the first film he forgets within the first 15 minutes and, even more so than the original, the plot is simply an excuse to get to setup next gag. There are some attempts to add a little bit of depth and social commentary. Having moved to a new network Ron hits upon a new way of telling the news which focuses on patriotism, controversial headlines and car chases over journalistic integrity, taking America by storm. Add to this the fact that the owner of the network is Australian and you get an idea of the film’s subtlety. To be honest though making people think about the way they view the media and news isn’t really the point of a film like this (there’re other films which do that admirably) it’s about the jokes and in this department it delivers.

With Anchorman 2 the actors, writers and director have discovered what worked well with the first film and boiled it down to its purest essence. If you enjoyed Anchorman (as I did) then I’ve little doubt you’ll enjoy the sequel just as much and credit to the folks at Jameson Cult Film Club for creating a great atmosphere to watch the film in.

Anchorman 2 is released on Wednesday 18 December. To find out about future Jameson Cult Film Club screenings visit www.facebook.com/jamesoncultfilmclub or www.twitter.com/JamesonCultFilm